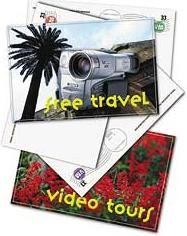 When Southern Comfort Tours of Florida loads up their buses for trips to Tampa, Atlanta, Key West, Chicago, Las Vegas and other points, Stan Sterlong is sitting right up there behind the driver in one of the best seats on the bus. And it doesn’t cost him a cent. During his three-day to three-week trips, he never has to reach for cash or credit cards because all of his expenses are paid. Stan is an amateur documentary videographer with a limited amount of experience but a lot of determination and a big desire to move around and see new things. "If you’re interested in traveling free," Stan says, "you can do it too. All you need is the desire, the ability to shoot some decent video and some tips on how to do it."

Stan, a 62-year old widower, received a video camera from his kids as a birthday present and he’s turned a hobby into an opportunity to travel all over the country absolutely free. In eight months, Stan had traveled to Tennessee, New York, Dallas, Denver and Chicago, and as of this writing, booked for three trips to Vermont and Vail to document ski trips.

Stan works for Southern Comfort Tours of Florida as a video documentary shooter and his five- to ten-minute videos are used by the tour company to lure clients into signing up for their latest tour. "We’re always looking for new clients, people who want to leave the driving to us," says Jack Gruben, Southern Comfort’s manager, "and our business thrives or folds based on the number of people who sign up for our tours. We’ve found these mini-documentaries are a great selling tool. The visual presentation of the destinations showing participants having fun and participating in a great adventure, is far more effective than our flashy brochures. We usually have no trouble finding people who want to go along once they’ve sat through one of Stan’s videos."

When the bus pulls up in front of a hotel in Dallas, an attraction in Missouri or a restaurant in Orlando, the first guy out the door is Stan, video camera in hand. "I start shooting the moment we arrive at our destination," he says, "and I keep shooting during the entire trip. I shoot footage of participants getting on and off the bus, walking inside buildings, sitting down in restaurants, checking into hotels, chatting amongst themselves, riding in elevators and shopping. Once settled at the hotel, I follow the group around on tours provided by the tour organizer. Nothing is too trivial. All of the bad stuff can be edited out later.

"I once had a man and his wife ‘act’ over dinner, discussing the trip and the fun they were having, reading over the menu, ordering from the guy in the black bow tie and even paying the bill. I wrote the script and it turned out great!"

Stan edits all of the raw footage (during a 4-day trip to Atlanta, Stan filled 13, two-hour tapes), down to create a five to ten minute video documentary. "I could make them an hour or more," he said, "but long videos just bore the audience and take up too much of the presentation time. They run the video, pass out brochures, explain what’s available and sign them up."

Jack Gruben and his staff show the videos at senior citizen groups, schools, club meetings and other various groups. "At one country club showing," Jack said, "we hosted a dinner and a ‘Let’s See Vermont’ tour presentation and signed up 53 participants for a fall foliage tour of Vermont. They paid $850 per person and I’m sure it was Stan’s video that convinced them to sign up. When we sign up a group paying over $800 per person, we buy all the elements of the tour: transportation, accommodations, meals and attraction tickets in bulk. We can easily pay all of Stan’s expenses and even give him some spending money. Most hotels, for example, will give us one free stay for every 20-30 paid stays and the same is true for restaurant meals, bus lines and attractions. So we are able to offer Stan a free trip without any out-of-pocket expenses."


Stan gets by with a minimum amount of equipment: a consumer camcorder, extra batteries and tapes, a tripod, and consumer editing gear. "When I return home," he says, "I go through the tapes and download the good stuff. When I’m done, I usually have 30-40 minutes of good stuff for every 3-4 hours of shooting. I store all of the excess footage on other tapes just in case. You never know when you’ll need some scenes from downtown Branson or Key West, and I can use them in other videos.

"I edit sequences of the good stuff (1. getting off the bus, 2. picking up the bags, 3. walking into a hotel, 4. checking in at the desk, 5. entering the room, 6. unpacking, etc.). I can also provide the sponsor with all of the raw footage unedited and they can hire a local video company to edit and add captions and music. They did that for a couple of high-priced tours that needed a little more professional pizzazz. Once the documentary is finished, I sign over the rights of the tape to the tour agency. I keep the excess footage in my library."

Stan keeps extra batteries and tapes in his bag so he never runs out of juice or tape. He carries a tripod but uses it mostly for static shots. Most shots are handheld with walk-ins for closeups. He also carries a separate camera for still shots that he incorporates into the video. On several occasions, he was also paid him extra for the stills so they could use them in their brochures.

Check the Yellow Pages for travel agencies and tour operators in your area. Chances are good that they would like to have a video documentary of one of their tours but probably think they can’t afford it. If you’re willing to trade talent for a free ride, they might be interested. Contact a local agency and explain what you do. The first tour might be a day tour or an overnighter that involves a minimum investment for the agency (your transportation, one night’s accommodations, and a couple of meals). If you’re confident you can produce something usable, you can opt to do a free video, pay your own expenses (but ask for a discount!) and hope it will result in some takers.

If no local tour groups are available, and you can’t find any businesses interested in giving you a free test trip, put together a mock tour with some of your friends. Include footage of a group walking down streets, shopping, walking in and out of hotels and attractions, eating in restaurants. Throw in some exotic stuff like horse and buggy rides, listening to live music in a club or taking a tour of a museum. Get personal comments and clear audio. Use your imagination. When you have everything you need, edit it down to five or ten minutes (or even less), put it on a DVD and make some copies. Send a copy to every travel agency and tour operator in your area.

Then sit back and wait. While you’re waiting, work on improving your video techniques. Don’t be surprised if the phone rings one day and someone asks, "Would you be available to leave for Paris a week from this Friday?"