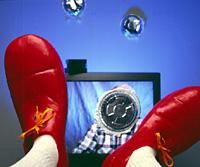 Whether you are the polished professional, or a beginning videographer, comedy can be a useful tool for reaching your audience. Mastering the formula for writing and shooting comedy, however, requires more than just a good sense of humor. An understanding of what makes video funny will help you create videos that make your viewers, be they your kids or your clients, take notice and perhaps even laugh.

There are really two types of comedy in video. The first type is the spontaneous "caught-on-tape" variety that you see on shows like America’s Funniest Home Videos and The World’s Funniest. A baby, having sampled pur´ed carrots for the first time, promptly bathes its mother with a gush of liquid orange. A no-nonsense newswoman reports from the field, unaware that the llama behind her has taken a sudden interest in her ponytail. A man walking across a stream on a fallen tree trunk suddenly feels himself slip. His body wobbles, straightens and pitches forward. His legs split open as he drops like a stone to the hard, wet surface of the log. Spontaneous events like these are funny, but catching them on tape can be nearly impossible. Why? Because by their very nature they can’t be scripted. The videographer must rely on time, chance and lots of videotape.

The other type of humor captured on video is the scripted variety. Scripted comedy can take the form of television sitcoms or set up gags, as seen on shows like Candid Camera and Show Me Your Funny. Either way, scripted comedy has become a mainstay of American television.

Where caught-on-tape footage requires luck, fate and chance, scripted comedy requires careful planning. Even simple routines, such as funny one-liners or the proverbial banana peel routine, must be done with timing and finesse. As a writer and producer of video, you need to become familiar with the various types of comedy that work well on tape. You also need to understand elements like the setup, anticipation, and payoff of comedy on video.

Comedy can seem easy and natural to the viewer, but in reality, it is very hard to plan. Screenwriters, sitcom writers, directors, actors and stand-up comedians meticulously plan comedy to come off as though by accident, with timing, wit, and unique insights into the human condition. Why do most video producers gravitate toward writing serious pieces? Because comedy is hard! Still, it can be done. A touch of humor makes for watchable, likable videos. Whether you make instructional videos, how-to tapes, travelogues or home video, a touch of humor will make your productions more appealing than the rest. And who knows? You may discover that you have a knack for comedy.

If you want to try to incorporate humor into your productions, perhaps the best way to prepare is to watch funny TV programs, and then ask yourself, "Why did I laugh?" You’ll discover that there are really only a handful of comedic approaches.