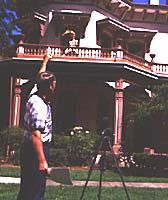 All video producers have had dreams of producing the Great American Epic. But for the beginning videogragher there are some traps to be aware of.

Fiction videos make great projects for hobbyists, so how come more people dont make them? One big reason may be that fiction movies often demand too much work for too little payoff. Too many story videos take a lot of time and effort and then die incomplete. A major bummer, that, as I know from years of honchoing over-ambitious student projects.

But all those dismal examples have yielded at least one positive result, here are 10 "Donts" for short fiction that can help you avoid the fatal temptations that lurk in fiction-oriented video projects.

Above all else, keep it short and simple. A satisfying story can be told in as little as 30 seconds (study commercials to see how) and you can do an amazing amount in about two minutes. Too many hobbyists dont realize that each minute of finished program may represent several hours of effort.

So start modestly to guarantee results. Youll feel good and your volunteer cast and crew will be far more eager to help you out on your next project.

2: Dont Wing It, Be Prepared

Dont begin a shoot with nothing more than a concept. Does this sound familiar? "Lets do, like, a bank robbery." "Okay, what happens?" "Well, well work it out."

You will indeed try to, by standing around trolling desperately for ideas while the cast and crew lose interest in this feckless enterprise. Never begin a production without a complete narrative line that unfolds in a progression of predetermined scenes that tell the story.

A script, storyboard, or at least a complete narrative summary ("treatment") will help not only you but your associates as well. They cant contribute intelligently if they dont understand what youre trying to do.

Too often those scenes are little skits performed by the cast while the camera sits back and records them as single shots, like the surveillance camera in a convenience store.

Remember that a movie isnt a recorded play; its a mosaic that is built from many individual shots, each one offering the best view of the small piece of action that it covers.

"Now," you explain to your actor, "youre furious that your daughter stole your golf clubs but simultaneously delighted that she won the junior tournament." Hoffman could play that without breaking a sweat, but since the actor here is your brother-in-law the insurance salesman, youll be lucky if he can do even one emotion at a time.

Dont demand complex and subtle performances from amateur performers. Write clear, simple actions, emotions and dialogue that your amateur cast can handle convincingly. In fact, you should always write with a particular acting company in mind, tailoring the roles to the available talent.

Amateur videographers often love building sets: the bridge of the Starship Enterprise or the boudoir of Marie Antoinette. Dont even think about it. Psychologically, the audience will accept a less than convincing set as par for the course for an amateur production, but a movie set has to look convincing. Script for places that you can adapt from locations and stay away from homegrown sets.

Dont script locations or incorporate props that are rare, expensive or remote. If your script says, "FADE IN: the Grand Canyon at twilight," or "Enraged, Harry drives his bulldozer through the half-finished house," then you clearly havent thought this thing through.

Nine times out of ten, when I ask students how they propose to do something like that, they reply, "Oh, well figure it out." It always comes as no surprise when they almost never do.

So, if you live in the city, write about the city. If youve restored a 1948 Hudson, include it by all means. You can also find convincing ways to fake exotic locales. In my town the city hall is a faux-baroque confection that my students use regularly for royal palaces and such.

As shooting schedules increase linearly, the amount of crew members that drop out (and other disasters) increase geometrically. Your cast and crew have families, jobs, obligations –in short, lives. Ask them to assemble for a Saturday or even a whole weekend and you have a chance of completing your production.

But if you demand that they interrupt their lives repeatedly to return for several shooting sessions. Sessions in which they must all show up at the same place at the same time, youd better be paying union scale or higher.

The lack of a single actor can shut down the shoot for the duration and even missing props and costumes can be fatal. "You were wearing a tutu in this scene; where is it?" "Darn! I knew I forgot something." Unless you can finish the sequence in closeups alone, youre through for the day.

If you have access to digital nonlinear editing equipment, you can do wonderful things with audio. But most of us are still in the analog world where laying in multiple sound tracks range from difficult to impossible. Without going down one generation after another, you have to roll in all your audio at once, in sync, as you build your tape shot by shot.

Consider this scene: as the exhausted Tommy cowers in his trench, we hear the sputter of biplane motors, the rat-tat-tat of machine gun fire, and the whump of constant mortar explosions. "Ill never get out of this alive," he mutters, as a male chorus fades in, humming Its a Long Way to Tipperary."

Uh-huh. It seemed like a clever idea to use audio to evoke a whole World War I battlefield around a trench you dug in your back yard; but how do you propose to lay three synchronous sound effects tracks plus a track each of dialogue and music?

Sound is a wonderful production tool because its so evocative and so cheap. But only if you have the technical means to use it effectively, and many hobbyists dont.

Another false hope is that you can correct or compensate for production problems in the editing suite. Bad color? Run it through a processor. Inaudible dialogue? Well dub it in. Bad framing or shaky movement? Well cut around that part.

It seldom works. Post-synching dialogue is a finicky business, even for professionals. In amateur productions, the lip movements seldom match perfectly and the overall sound quality, when paved over by the dubbed-in voices, doesnt resemble that of the original location.

As for the bad camera work, Murphys law number –well Ive lost count– decrees that the technically poor footage will consist exclusively of indispensable shots. So if you dont get it right, repeat it until you do, or else invent and implement an alternative on the spot. Dont bank on inspiration in the cutting room when it fails you on location.

Its your show and you did four times as much as anyone else to pull it off successfully; but though youre tempted to banner FRIBBLE PRESENTS A FRIBBLE PRODUCTION WRITTEN AND DIRECTED BY FRIBBLE, etc. etc. resist that impulse.

Remember: thanks and a production credit are all you have to reward your colleagues (who, rightly consider themselves indispensable to your success). If you want to retain their good will and get them back for your next epic, be lavish in distributing recognition.

A good way to do it is to give a generous screen credit to everybody except yourself, even if you wrote, produced, directed and edited the show and provided coffee and stale donuts. Then, at the very end of the credits, take a last single screen for yourself: A FILM BY FRIBBLE. (I know, I know, its technically a tape, but "film" has become the generic term, regardless of recording medium.)

So there are the ten donts of story video production. Lets turn them upside down to end with a positive restatement:

Come to think of it, if you follow these "dos" of making story videos, the "donts" will take care of themselves.