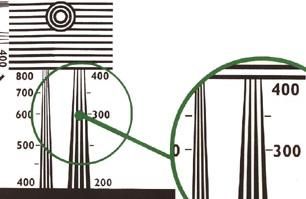 One area of camcorder performance that gets a lot of attention is horizontal resolution, the ability of the camera to resolve fine details. Horizontal resolution refers to the number of separate, distinct vertical lines that are distinguishable horizontally across the television screen. This test determines how well your camcorder will record intricate patterns or small, distant subjects.

Luckily, the standard test for horizontal resolution is both easy and inexpensive. First, get yourself a standard horizontal resolution chart (see figure 1 for an example). Fix your chart to a wall, then put your camcorder on its tripod, cable it up to a television set or monitor and aim it at the chart. Take care to frame up the edges of the chart precisely in your camera’s viewfinder. After achieving a sharp focus, look at the monitor–not the camera’s viewfinder-to see the results. Look for the exact point on the chart where it’s no longer possible to distinguish separate vertical lines. This point will correspond to a number printed alongside the chart, and that number is your camcorder’s in-camera horizontal resolution, measured in lines. Once you’ve taken this reading, put a tape in the camera and record ten seconds of the chart; rewind the tape, play it, and notice the corresponding drop in resolution–this is your camera’s playback resolution, which is the more important of the two because this is what you’ll see whenever you play a tape shot on your camcorder.
It’s important to note that camcorders have two kinds of resolution: horizontal luminance (black-and-white) resolution and chrominance (color) resolution. While horizontal luminance resolution is a measurement of how many alternating black and white lines the camera can distinguish, chrominance resolution deals with the variance between different colors of equal luminance. Testing color resolution is trickier than testing black and white resolution, but it’s easy enough to just "eyeball" the results off a monitor. First, check your monitor’s settings with a reference signal known to be good, such as color bars from a video mixer or tape. Second, perform this simple test: find something colorful to shoot, like a friend wearing a bright red or yellow sweatshirt. Shoot six five-to-ten-second shots of the subject at various focal lengths, both indoors and outdoors, then watch the footage carefully on your monitor. Does the color "bleed" out of the lines of the subject? If so, then you’re looking at evidence of poor color resolution. A camera with good color resolution will keep richly saturated colors sharply within the lines that make up the black-and-white portion of the image.

Now that we’ve covered some ground in the image resolution category, let’s discuss some of the ways you can test the capabilities of your camcorder’s lens.
One of the big selling points that manufacturers use to hawk new camcorder models is the length of the telephoto end of their lenses. Just five years ago, camcorder manufacturers commonly bragged about having a 10:1 optical zoom range on their cameras, which means that the telephoto end of the zoom magnified the image ten times more than the wide-angle end. Nowadays, it’s more common to see optical zoom ranges in the 20:1, 22:1 or even 24:1 category.

Most often, however, the end of the lens that videographers find themselves wishing to improve in actual shooting situations isn’t the telephoto. If you’ve ever found yourself backing up further than you wanted in order to fit the entire wedding party into the shot, then it’s a good wide-angle lens that you’ve longed for, not a longer reach for the telephoto end.

Instead of resorting to mathematical formulae to determine how wide your lens will go, we’ll perform a very simple line-of-sight test that will determine the actual angle of view your lens can achieve at its widest setting. First, set your camcorder on a tripod in a large indoor room. Then zoom the lens out to the widest angle you possibly can, keeping the line of sight of the lens perpendicular to one wall of the room (figure 2a). Looking into the viewfinder or monitor, identify the point on each side of the room where the lens’ field of view ends. Without moving the tripod from its location, mark these points on the wall with tape, then follow the imaginary lines between these points and the front of the camera’s lens. Mark these lines with tape on the floor, then measure the angle where the lines intersect underneath the lens (figure 2b). If you know this angle, and make a habit of keeping a protractor in your camera bag, then you’ll be able to determine in a heartbeat whether or not your camcorder will be able to produce the shot that you want.

Let’s not forget, in this discussion of lens attributes, the power zoom that moves your lens’ elements closer together and farther apart. If you ever want a smooth on-screen zoom, you’ll want to do some tests before you begin. First, determine how long it takes to move from the shortest to the longest focal length with your camera. Then rock the zoom controller back and forth slowly across the zoom range to determine how many zoom speeds are available to your camera. On many high-priced models, the harder you push the button, the faster it zooms. Finally, use the knowledge that you’ve gained from these simple tests to practice smooth-looking zooms.

All too often, consumer camcorder manufacturers opt to remove manual controls from their gear, leaving white balance, exposure and focus settings at the discretion of complex electronic systems. These systems, designed to make life easier for the videographer, don’t always perform as well as they should.
Automatic systems are generally poor at adapting to changing conditions. Therefore, the best way to test your camcorder’s automatic systems is to introduce changing conditions in lighting intensity (for automatic exposure), light source (for automatic white balance) and distance to subject (for automatic focus) within a single shot. For example, shoot a slow pan from a dim room to a window where you see a sunny outdoor day, use a stopwatch noting the time of the camera’s compensation for the power of the sun. To test the automatic focus system for speed and accuracy, you might try another slow pan without a zoom, moving from a glass three feet from the camera to a vase fifteen feet away. With the stop watch, time how long it takes for the autofocus to lock in on the vase and then when it does observe how sharp the focus is. For a good automatic white balance test, take a slow, steady walk from an outdoor setting into an indoor room. When evaluating your camera’s performance on playback, look for smooth, accurate transitions in focus, exposure and white balance; some systems make it look seamless, while others have a tendency to hunt around for the perfect settings.

If your camcorder has image stabilization, you can perform some simple tests to get a close approximation of its capabilities. The primary role of image stabilization is to cure the dreaded shaky-hand effect that is a natural consequence of the trend to make smaller and smaller cameras. The easiest way to test this task is to locate the point in your lens’s zoom range where it becomes difficult to hold the image steady. First, plant your feet firmly while holding the camera as steady as possible. Zoom out to the lens’s widest setting, and pick a distant subject. Placing this object in the center of your frame, roll tape and zoom in slowly by degrees, stopping for a few seconds at short intervals along the lens’s entire zoom range. If your lens has a readout in the viewfinder indicating the exact zoom range, you might want to say this number out loud while you roll tape. On playback, you’ll be able to discover the point on the lens’s zoom range where the image stabilization systems begin to fail.

There are a few professionals in the audience, no doubt, who feel the urge to squawk, "What about oscilloscopes? Waveform monitors? Vectorscopes?" Yes, those are all very nice, and they serve well in professional situations. However, if you’re just a guy or gal with a camcorder, and want to test your equipment without having to obtain an oscilloscope, waveform monitor or vectorscope, why not do what great artists have done from time immemorial: put your eyeballs to work, and make your own judgement whether a certain system works or not. In the end, you’ll know your gear–and the craft–better for it. 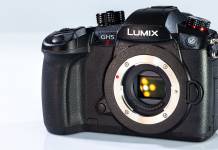 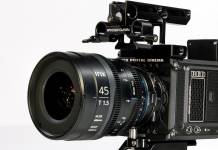