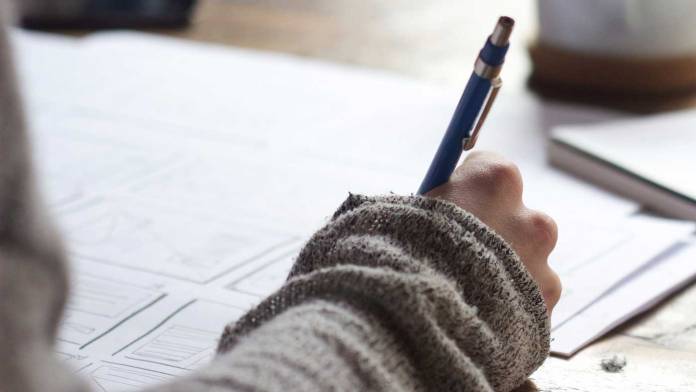 A storyboard is one method of planning ahead. By visualizing your shots with a storyboard, you can see how your shots fit together before you’ve shot a single foot of film or frame of video, which will prevent you from wasting both time and footage. A good storyboard allows you to show your crew what you have in mind, and saves you from trying to convey what you want with wordy explanations and frustrated hand gestures. When you show your Director of Photography (DP) and camera person your boards, they will immediately know what type of shot you need and how to frame the subjects. 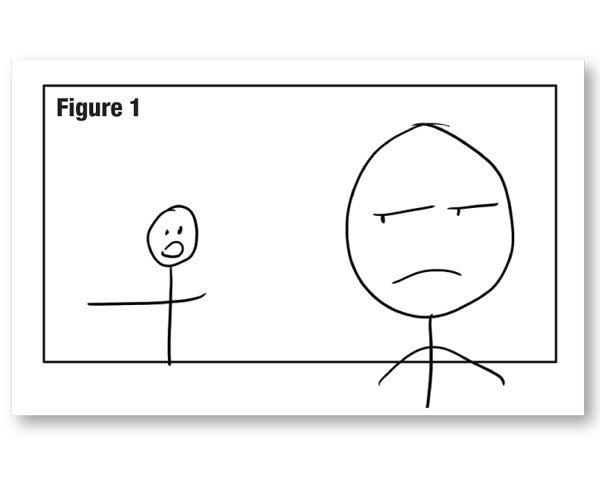 While you were learning about filmmaking, paying your dues as a Production Assistant (PA) or other crew member, or even just searching around the Internet, you may have seen elaborately detailed storyboards by professional artists. Boards like those are nice, but you don’t need to be a talented artist to storyboard effectively. Even simple stick figures can give people a good idea of what your shot sequence will look like, for example, the illustration in Figure 1.

The Different Types of Shots 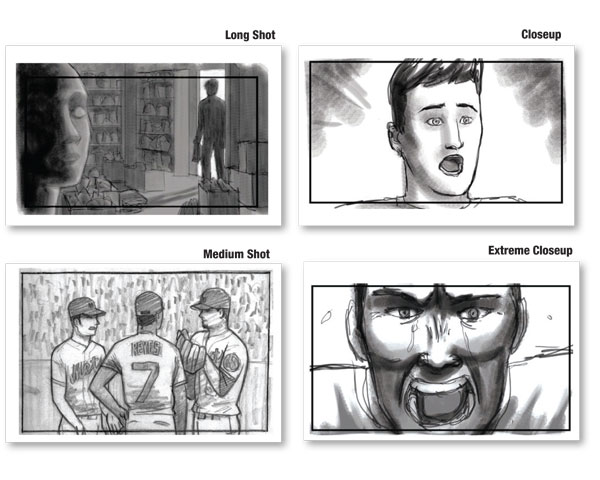 A medium shot will usually depict your subject anywhere from above the knees and up to just above the waist and up. Remember not to cut off your subjects at the knees, or any other juncture of the body – It looks awkward and poorly composed. Try to frame them just above or below the joint in question.

Closeups are where we most often see the emotional content of a scene. They allow us to see the character’s faces up close, and thus their state of mind. Close ups are usually framed from the chest up. Occasionally, however, they can be framed from forehead to chin, or will even involve just the subject’s eyes. We call this an extreme Closeup.

Most single-camera productions don’t rely so heavily on the master shot; however, keeping the master shot in mind can help you plan out the rest of your shot list. For example, in a scene depicting a conversation between two people, you may decide to cut to closeups of each person talking, plus an insert shot of an item that they’re talking about, and then cut back to the master shot after each one. This is a very basic way of editing a scene. 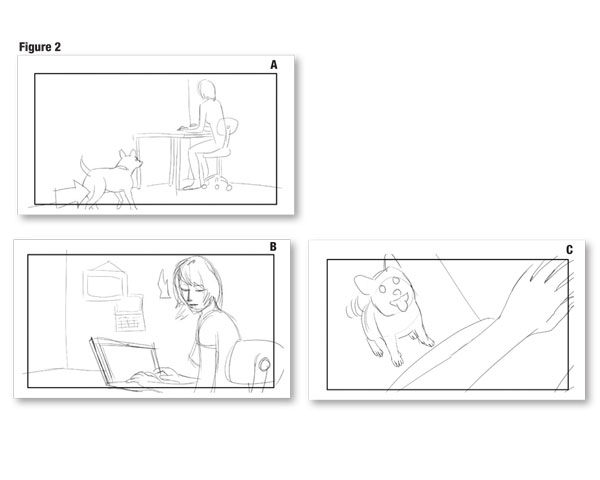 Now that we’ve talked about some basic shots, let’s go over some important camera movements, and ways to depict them on the page: 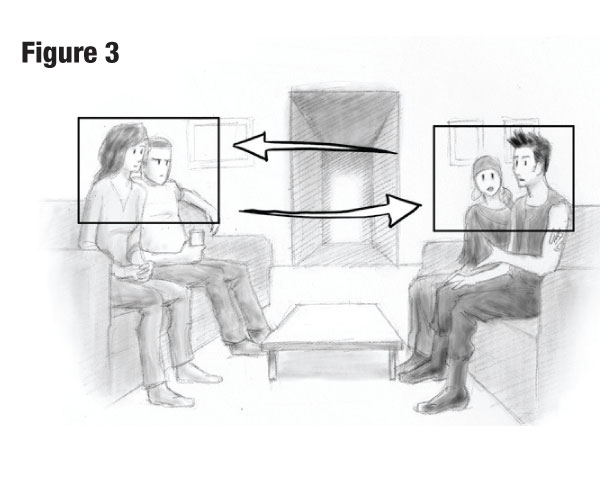 A panning shot can be storyboarded by first placing a couple of frames in order to show where the camera will start and where it will end up, and then adding arrows to describe the camera movement. In Figure 3 we see a panning shot for a simple dialogue scene. 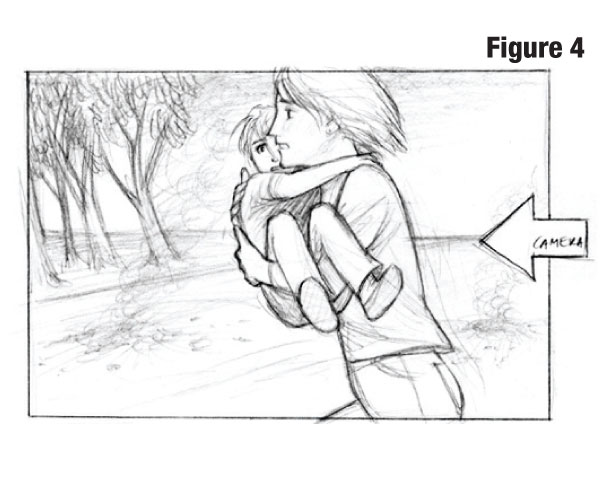 A tracking shot is another way to follow subjects. This type of shot involves moving the entire camera from one place to another, and often follows a moving subject. Tracking can involve moving the camera with tracks or on a dolly, or it can be done handheld.

In Figure 4 the camera follows the mother as she runs. Note the arrow showing the camera direction. 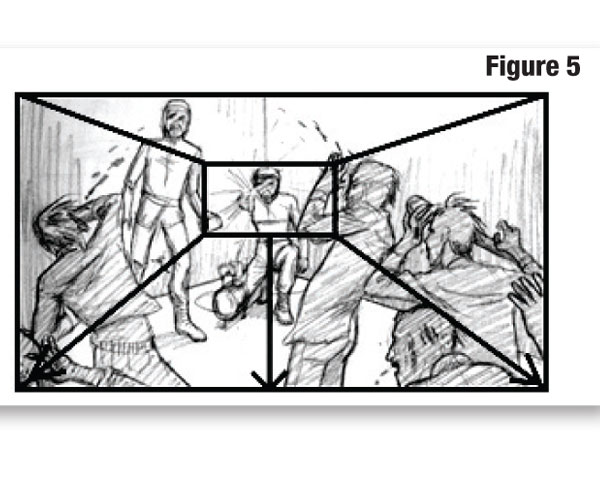 The interior frame indicates where the shot begins. As the action proceeds, the camera pulls out, as shown by the arrows. The outside frame shows where the shot finishes – on a wide angle showing the entire room and all the characters in frame. 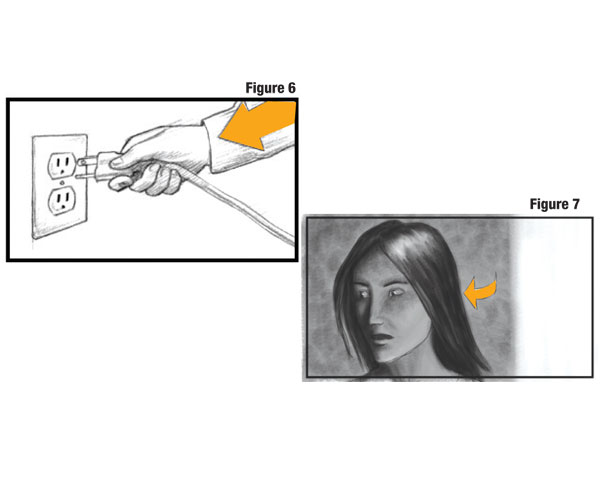 What if you don’t need the camera itself to move, but want to show characters moving into, out of, or through the frame during a shot? An easy way to do this is by drawing arrows. (See Figures 6 and 7). 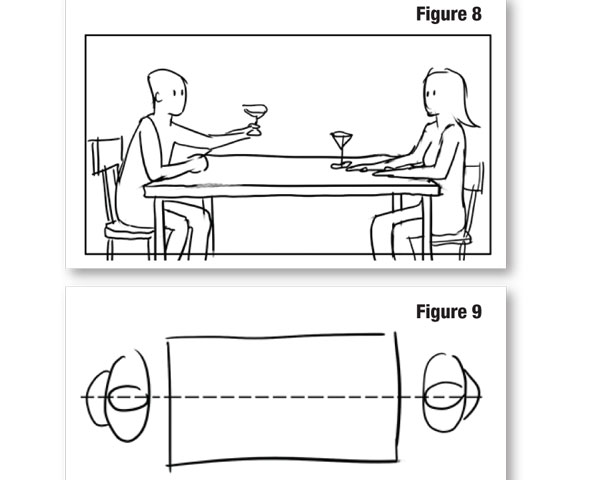 Now that we’ve covered the basics, here are a couple of other things to keep in mind when setting up your shots. First, you may have heard people talk about “not crossing the line” when they’re setting up a scene. They’re using a slang term for the 180 degree rule or line of action, which is a very important rule of thumb for filmmaking. We’ll demonstrate this rule with a simple dialogue scene. Here master shot, shows Bill and Carol seated at a table together (See Figure 8). Now imagine this scene from overhead, with a straight line running through the middle of the subjects (See Figure 9).

Keeping your camera on the same side of this line – aka the 180 degree line – will assure visual continuity and prevent your viewers from becoming disoriented. 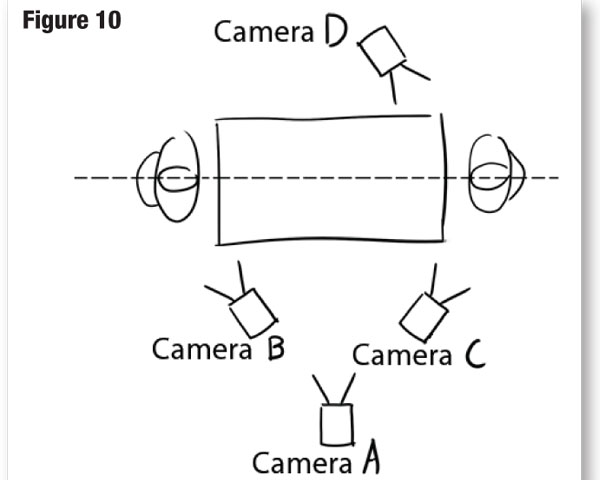 Now we see the same diagram with a few possible camera placements. (Figure !0). Notice that cameras for A, B and C are on the same side of the line. 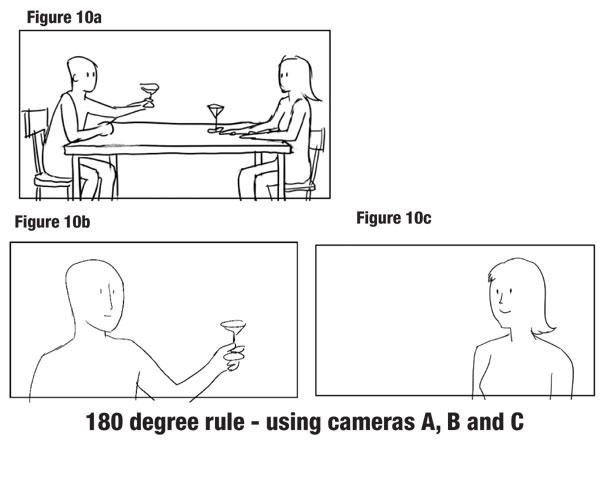 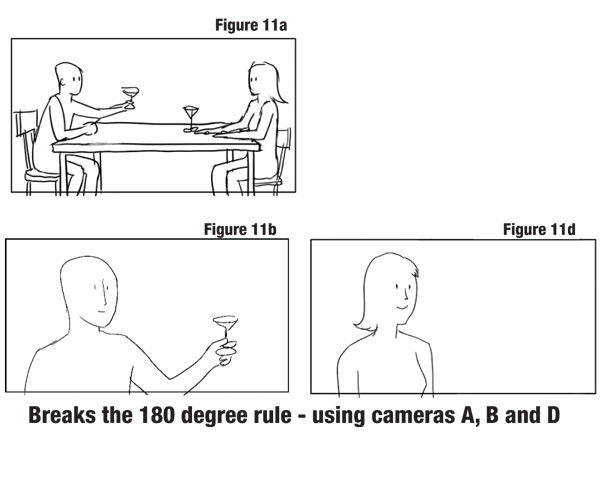 This shot sequence is disorienting because it breaks the 180 degree rule. Notice how Bill and Carol now look like they’re facing the same direction, rather than looking at each other across the table? Keeping your camera on one side of the action will save you a big headache in the editing room!

Finally, it always pays off to practice! You can do this even if you don’t have a script of your own to work on. Get a DVD of one of your favorite movies and choose a memorable scene from it. Sit down with a pencil and some paper and go through the scene shot by shot. Copy each shot onto your paper, using the examples in this article as a reference (remember, stick figures are OK!) As you draw, think about the shot choice. How does the selection of shots contribute to the overall feel of the scene? Are there lots of emotive closeups, or does the director use wide shots to convey distance or loneliness? Does he or she stick closely to the master shot, or is the scene full of movement? Looking at the work of other directors can teach you a lot about how scenes are put together. You don’t even have to pick up a camera to do it!

Jennifer Albright is a UCLA film school alumnus and Los Angeles-based illustrator whose storyboard clients include Fox Sports Marketing. Her illustration work can be seen at www.trickunicorn.com.