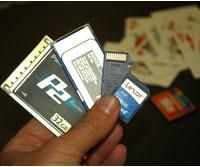 As you ante up at the table of tapeless video cameras, you may be at a loss about how to deal with your recorded data. Maybe you have seen the professional camera sharks, shuffling their cards of video, mixing and spinning the data with a flawless sleight of hand. Up and over, round and round they go. Then all of a sudden, they pick a card and are re-recording over it in the blink of an eye. How did they do that? How are they so sure which card to pick? Are they erasing their video?! Sooner or later, it will be your deal, and you’ll have to pick a card. Which one will you choose? Which process is best for you? Is one type better than the other? Do you pick P2 or SxS? CF or SD? What do you do with the video after you’ve shot it?

I personally have used several different types of media, but I have settled on the SxS cards, like the kind used in the SONY EX1. SxS cards are very fast in the offload speeds and are less expensive than the P2 cards. More importantly, they are becoming easier and easier to find, should you need to buy one for an emergency in the field. Also, my MacBook laptop has a dedicated SxS slot; I’ll explain why that is such a great thing later in the article.

No matter which card you choose, you’re going to have a winning hand, because non-tape options are here to stay, and tape is being dealt the final blows. But don’t be fooled into thinking that it’s going to be an easy transition: dealing with cards is a lot different from dealing with tapes. If you have bet big on tapeless, then pay attention, and I’ll slip you a few tips on how to keep your cards in order while you play the game.

The first thing you should know when using memory cards is that you need to keep them straight, be organized. Unlike tape, you can use cards over and over, sometimes even on the same day. Since the copy process is quite quick, you could very well be on your way to erasing footage you just shot if you don’t keep it all organized. Keep in mind that we are not talking about re-recording over your video while still in the camera, because that is nearly impossible with cards (but possible with tape – if you were to rewind it, you could conceivably start recording over it without ever knowing it). Memory cards always start recording where you left off. What I am talking about is deleting your memory, after you offload the data, because this is where the mistakes happen. All it takes is putting the card in the wrong order or a little mislabeling, and – shebang! – there go your pictures. You need to be sure that you have copied your shots off before you move on. So being very diligent here is very important.

There are as many ways to keep your data organized as there are cards in a deck, but here are a few to get you started. First, label all your cards clearly and differently – this will help you keep them in order. Second, I recommend that you shoot them in the same order every time (i.e., shoot card #1, then #2, then #3, then repeat), because repeating the process over and over, shoot after shoot, helps you reduce the chance of confusion and therefore error. Third, as soon as you pull the card from the camera, mark it as shot. Whether that means flipping the tab on the card, marking it with tape, sticking it in a small envelope that is marked “To Be Copied” or all of the above, there are never enough ways to be sure that footage has not been dubbed.

The retail street hustlers will never mention the other half of the pair you need to buy when you are purchasing a hard-drive camera. If the tapeless world is the way you want to go, then you really need to purchase a battery-powered backup storage device for offloading your footage while you are on location. Some companies sell a special smaller unit with a larger hard drive to do this. I suggest a cheap laptop with a large hard drive, because, if you are going to spend a grand or more on a storage device, you might as well have a TV screen and editing software too. Whichever you choose, be sure it is battery-powered, because you can never be sure you will be near a plug when you need it. Another thing you should be on the lookout for when purchasing a laptop is to be sure it has a slot that matches the type of card you are using. This will not only reduce the number of parts you need to carry and/or lose, but an internal slot offloads the data 10 to 20 times faster than external adaptors. Consider adding Serious Magic DV Rack software to your laptop. This allows you to monitor a slew of things, including your video side by side with a waveform monitor and vectorscope while you’re shooting live.

Having a full stack of memory cards is a viable alternative if dubbing to a laptop in the field is not for you. However, you will have to offload the data eventually to something when the shoot is over. If you choose to go this route, I would suggest that you get medium-size cards. Buying smaller cards may save you money, but you will constantly be changing them. Buying larger cards means less changing, but it means longer offload times, and, if one card should develop problems, you lose a whole lot more footage than with a mid-size one.

You need to be flush with memory backups if you are dealing with clients. Handling cards over tapes is all about redundancy. A minimum of two places is required, but the more places you can store your video, the better. Copying it to a laptop is good; adding an external drive and copying it there when you’re in the field is even better. Burn your video to DVD or a Flash drive, and now you’re talking. You can never have enough backups.

When you are shooting tapeless video, your clients will worry that they can’t hold the goods in their hands when the shoot is over. They are so used to taking the tape with them that they get all panicky. One quick way around this is to dump your footage onto an external drive for the client, after you have put it on your laptop. If money is an issue, then you might ask your clients to bring their own drive. Having another drive not only gives you another place to back up the data, should yours become corrupt, but it will also give them a copy to walk away with in their hands. I find this a great selling point. Tell your clients that they can log the footage while on their way home. They might even have a cheap editor in their own computer and can start doing rough cuts while you are still on the set. Talk about efficient. When they are finished with the entire production, they can even shelve the drive with the raw footage on it or move it to a very large, long-term storage unit for permanent keeping.

Whatever you do, don’t ever bet that you have copied something before you erase it – know that you have. Review and check all of the places you copied it to, and be sure your video is there. Because once you have deleted the footage, it is gone. Then, when you are absolutely sure you have a couple of backups, reverse the process. In other words, flip the tab back, pull the tape marker off and put the tape back into a pouch that says “To Be Recorded” or some other spot you have designated for clean cards. Remember, every step you take to ensure you have the video is one more reason to feel confident you have an ace in the hole.