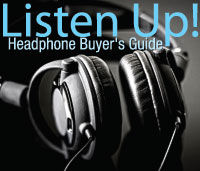 Don't Rely on Your Ears Alone

Silent movies went out of fashion with The Jazz Singer in 1927. Since then, sound has been important to nearly all productions. So, unless you're looking to be the next Chaplin (who made most of his films in silence, long after the introduction of talkies), it's important to ensure clean, crisp sound for your productions. You can ensure that quality through the use of headphones.

The choice of headphones is important. Like shoes or a good suit, fit is more important than looks. An ill-fitting set of headphones is not only uncomfortable; it lessens your ability to hear the more subtle variations in sound and unwanted bits of audio or to confirm high-quality audio for a top-shelf production.

Even the cheapest set of headphones is better than the small manufacturer-supplied speaker on the side of the camera. Check to see if your camera has a headphone jack on the side. Not sure? Check the manual. As with any MP3 player, plug in the headphones and give a listen. You'll be surprised at exactly what you'll hear – and won't hear. Sounds you would never expect come filtering through the silence, and sounds you're certain would overwhelm all other audio may be quite subtle. Headphones allow the wearer to know exactly what sounds are entering the camera for recording.

Headphones also make it easier for the user to determine when there's a problem with a camera-connected microphone. The headphone wearing camera person can immediately correct static, dropouts, over-modulation, too-low levels and excessive ambient sound. The poor soul without headphones is doomed to discover his poor audio hours after the event is over, and correction is at the mercy of the computer software in his editing program – if it can be fixed at all. Ever try to remove a screaming teenager using software?

The Best Fit For Your Ear

Hundreds, even thousands of choices dot the retail landscape. But what really matters is the pair that works for you. Test drive many, many kinds – take along your favorite MP3 player and try them on.

The primary consideration when buying a set of headphones is sound quality. Despite impressive specifications, your opinion is the defining factor. Unlike speakers, headphones lack a speaker's ability to work with the space of the room and even act upon the unique shape of the listener's head to change the perception of sounds. So, it's important to choose the set that suit your needs the best.

Headphones feed audio directly into the ear canal, bypassing the room and head effect that external speakers normally exploit, and affect each person's sensitivity to the same sound. So, one set of headphones ideal for person A may be a horrible choice for person B, based simply on head size!

The next priority is fit-and-feel, according to you and your opinion. Even the finest headphones are useless if they're uncomfortable. Uncomfortable headphones are likely to remain unworn. In over-the-ear models, check for the seal over the ears to block out unwanted noises. Trying to listen to your child's recital over your talking neighbors is far easier when you can block them out with well-sealed headphones. Conversely, a poor seal will block out little to no extraneous noise. Some models are too tight on larger heads or may not seal properly on smaller ones.

Headphones don't have to be huge, over-the-ear affairs (but they can be – more on that later!). Small in-the-ear "buds" can be nearly as effective. Commonly seen as the standard headphones for MP3 players, these headphones use tiny transducers to reproduce sound in the ear canal. Problems arise when the earbuds don't fit well in the wearer's canal. Loose-fitting earbuds can be annoying and diminish sound quality to the point of uselessness. Some folks (like me) can't really get a good fit using earbuds. Many manufacturers provide different sizes of the gel-like ear plug covers to press onto the ear buds to fit more ears snugly.

Not always cheap, earbuds are available in a very wide range of prices, sometimes into the hundreds of dollars. Most are less than $100 and reproduce sound quite well. They're convenient because they're small, which means you're more likely to carry them with you and to use them. They have the benefit of almost no bulk and are less likely to get in the way during awkward or crowded movement. Also, they're less visible than the other choices presented here and may make the wearer less conscious in a social setting.

Cover Your Ears to Hear Better

Although earbuds are some of the most common headphones, there may be a time when you need a better way to monitor sound quality or the budget forces a single choice in headphones for multiple applications. Mid-sized headphones used to be the most common type when cassette players ruled the world. Usually found with sponge-foam ear pads, they fit over the head and press lightly against the ear, enhancing sound quality. Higher-end versions may have a vinyl-covered, foam-filled "doughnut" instead of plain foam, to better seal the ear and block out outside noise pollution. This type is a step up from the earbuds, but it lacks the studio-monitor quality of its big brother. It has the advantage of offering relatively light weight, better ambient sound sealing against the ear and higher frequency response. As with its little brother the earbud, you often get what you pay for, and higher priced models often have better response on the extreme ends of the audio spectrum.

Mid-sized earphones are less convenient than earbuds. However, some models can fold up into a very small package for storage, and others fit behind the neck instead of the conventional over-the-head style. A few hang over the ear and appear to be oversized earbuds. These hybrid models can be hit and miss in the fit department, however.

Bulk Up For Quality Sound

The top of the headphone food chain is occupied by the stereotypical huge over-the-ears headset that studio engineers, video production sound recordists and some musicians use to make their livelihood. Heavy, bulky and top-of-the-line expensive, they're also the best available when it comes to blocking out exterior sound, reproducing low bass notes and high-frequency response. Not conveniently portable, they're an excellent choice for an editing suite or to keep speaker noise from waking the family. They also allow the editor to pick out audio irregularities that wouldn't otherwise be audible and to eliminate them as a source of distraction.

Not at all portable, they don't store conveniently, and they take up a good amount of space. However, the audio-quality plusses more than make up for the convenience minuses. They reproduce low-bass and high-frequency tones with crystal clarity. So, if the audio you're listening to is somehow muddled or of poor quality, chances are it's not the headphones, and there's a problem that needs addressing in the video or editor.

Are You Listening Now?

Whether in the field recording a music performance or editing a pastor's speech in an edit bay, headphones are crucial for editing clear audio and a quality presentation. It's not enough to record the event and hope the audio is ok. Why take a chance when confirming crisp audio via a simple set of headphones is so easy? Like Al Jolson told us in The Jazz Singer, "You ain't heard nothin' yet!"

Randy Hansen is a television news chief photographer and uses headphones in his daily work.

Side Bar: What the Heck is That Thing?

Watch the news tonight and you're bound to see the anchors and reporters wearing a tightly-curled earplug in one ear. These are called IFBs in the television industry. IFB is an acronym for Interruptible Feed Back. These are highly specialized headphones meant for a singular purpose.

TV hosts, ENG personnel and others in the "biz" use these to provide a stealthy audio feed from the control room or off-air. The IFB is not intended for studio-quality music, but for hearing the producer provide time countdowns or new information and for the anchors who may ask questions to reporters in the field. Videographers also use them, as they often plug into and listen to the same IFB signal as the talent.

IFBs are custom-made to each ear. A gel-like substance is pressed gently into the ear canal and allowed to harden. The resulting shape is sent to the IFB manufacturer, where it's ground down to a unique shape roughly the size of a peanut and returned to the talent. By the way, the master is kept at the factory for later reorders, as the ear canal never changes.