There are many reasons why audio from a telephone might be in a video. In a dramatic production, it lends an impressive verisimilitude. (Recall the audio from all those nail-biting phone calls in the newsroom of Redford and Hoffman’s All the President’s Men.) In a documentary, the audio from a telephone interview with an author or news source could be the underpinning of all sorts of footage. Or maybe you’d simply like to sync home movies of the good old days with an interview of mom and dad, to post on YouTube.

It sounds simple in theory, but you’ve got to get the audio from the telephone into your favorite editing program, making sure that that audio is as free of snap, crackle, pops and hum as possible and ensuring that the volume is loud enough to be consistently clear and audible.

Over the past two years, I’ve produced audio incorporating telephone recordings for nearly a hundred internet podcasts and XM satellite radio shows. And over that time, through research and a little trial and error, I’ve collected several methods to produce surprisingly clean telephone audio.

Getting the Phone into the PC

The first step to getting your phone call audio into your computer is selecting hardware and software. To accomplish this, I use JK Audio’s Inline Patch product ( www.jkaudio.com). At $270, it is designed for use in radio stations and other professional environments, so it has pro-style XLR connectors on the back of the unit. It’s also become increasingly popular for high-end internet podcast recordings. As long as your soundcard has XLR jacks (or you purchase appropriate XLR adaptors), you’re good to go.

A lower-cost choice, but without the quality and flexibility of the JK Audio product, is the Model #43-2208 $30 phone recording interface that Radio Shack sells for $30. Finally, you can use a turnkey online internet telephone recording service such as Blog Talk Radio ( www.blogtalkradio.com). Although all of these can get the job done if necessary, we’ll talk more about tips for cleaning up a telephone recording in just a moment. Needless to say, how much clean-up you will have to do often depends on the quality of the initial input. 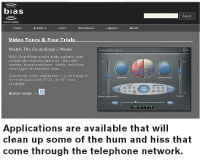 Radio interviews usually have the DJ or host on a live mic and the guest calling in on the phone. Hearing the question clearly actually makes the answer easier to understand and helps the audience to immediately know which person is the interviewer and which is the guest.

Splitting the host and caller is actually fairly easy. Whether you’re using JK’s high-end product or Radio Shack’s lower-end device, in order to provide the most flexibility when editing and mixing down, plug the telephone patch into one input of your mixer or sound card’s breakout box. Into another input, plug in a separate stand-alone microphone (a Shure SM58, for example) to record the interviewer’s voice while he or she is on the phone, and record the call as two separate audio tracks.

The next step is setting the input on your PC’s mixer to get a level that’s audible but doesn’t distort when the interviewee’s voice peaks. This often won’t show up during the bulk of the telephone call, but when the caller dramatically emphasizes a point, you don’t want to distort what might be the most interesting part of the recording. Unlike analog audio, which often distorts in a warm pleasant way, digital audio can introduce some nasty digital clipping during the peak volume of a recording, so a bit too low is better for recording a phone call than too loud.

Setting the levels on the JK Audio Inline Patch can be a bit tricky at first. I found that there was always a considerable amount of hum on my recordings until I turned the Inline Patch’s From [Telephone] Line knob way, way up (to about the 4 o’clock position), and concurrently turned the recording levels of my sound card’s breakout box way down.

At that point, the hum reduced considerably. But there’s always a certain amount of noise inherent in any telephone recording. After the basic recording is complete, we’ll dramatically clean it up, using some high-end recording applets.

The Sounds of Silence 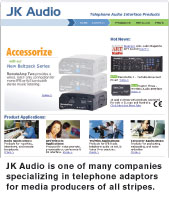 For recording software, I often use Cakewalk’s high-end Sonar platform for Windows, but most recording programs have the necessary tools to record and edit telephone calls. The real horsepower is in the plug-ins available for these programs. And modern noise-cancelling plug-ins, originally designed to cancel the noise and hum inherent in transferring a slightly newer medium – the LP record – to a PC recording, work even better to neutralize phone noise. There are numerous brands, including Izotope’s new RX (www.izotope.com), but one of the most popular is SoundSoap, by Bias, inc. (www.bias-inc.com). SoundSoap comes in two flavors: the entry-level for $100 and SoundSoap Pro for $500. While the entry-level version isn’t bad, it lacks the ability to fine-tune and turn on or off each setting that the Pro version of SoundSoap provides. By first neutralizing hum and the hiss with such a product, then finally adding an automatic noise gate between words, you can usually produce a remarkably clean telephone recording.

Cakewalk’s Sonar recording program has a Normalize function, which will take the pre-recorded audio and boost its peaks to whatever level you like (I typically use one or two decibels just below maximum), though it may still be necessary to use your recording program’s scissors and gain tools to cut and then adjust audio that’s too hot or too low.

Once you have more or less normalized the basic recording level, the next step is compression. Again, because the telephone is such a lo-fi device, once you have cleared the track of hiss and hum, you can compress it to a much more extreme degree than you could a voice recording from a hi-fi microphone, without making it sound phony or overly “squeezed.” While there are all sorts of compression applets for recording programs, one of the best is Izotope’s Ozone plug-in. Assuming I have a clean-sounding telephone recording, I frequently use the Commercial Voice preset to compress the sound to a tight, even recording.

Typically, I copy these now clean and evenly-mixed tracks into a separate track, and use Sonar’s Archive function to mute and save the original raw telephone recording track as a safety copy.

Cutting out the audio of the person not speaking automatically makes for a much cleaner recording. At this point, you can use the scissors tool to cut the interviewer’s questions out of the telephone call track. And, on the interviewer’s clean microphone track, you can cut out the “silence” (which will actually have plenty of breathing, thumping, papers being shuffled, etc.). Finally, you can add dissolves between the two tracks, and mix the two tracks down to one for insertion in your project.

With all of the set-up work done, and a clean, compressed telephone recording available, it’s easy to edit a recorded telephone interview. You can easily edit out coughs, ums, ahs and other speech imperfections if desired, using the scissors tool of any decent digital audio workstation program. It’s also possible to replace the introduction and closing segments, or even a blown question, by cutting in newly-recorded audio afterwards, using the same microphone the interviewer used during the original recording.

If the interviewee on the other end of the call is tech- and recording-savvy, or if you’re willing to pay for a pro to record the interview, it’s possible to do what’s still called a “tape sync” in the recording industry, even though traditional audio tape is rarely used these days. Simply put, the person on the other end of the telephone line will have a professional mic and hi-res recording software just as you do. They send you the hi-res recording, and you sync up the two recordings (which is surprisingly easy to do using the waveforms that the GUIs of most recording programs generate), do your cuts and edits, and – voil – you have generated an NPR-quality interview.

Even without tape-syncing, you can improve the quality of your end result by giving the person with whom you are speaking by phone some simple advice. Suggest using a landline, not a cell phone. Advise putting the phone on mute while you’re talking (and you do the same when the interviewee speaks). Even if you have to remind the person to take the phone off mute, you can cut that out, but you avoid the Darth Vader sounds of the interviewee’s breathing into the phone while you ask a question; these are difficult to remove. Remind the person to close the door to the room, so you don’t hear children announcing their potty break, and remember to repeat questions if an answer is interrupted by a plane flying overhead.

With these few hints, using a basic phone – and the right hardware and software to record it – can produce some dramatic results. And just wait ’til you add the video on top!