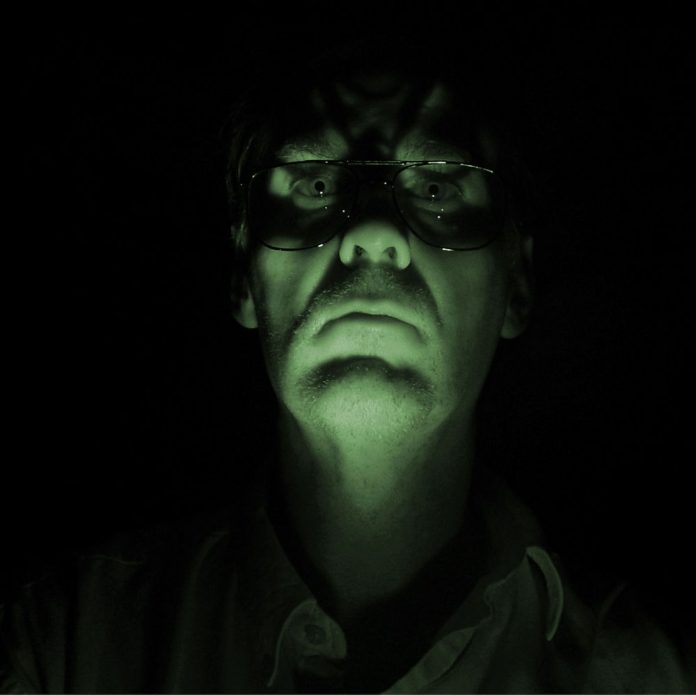 Gone are the old days when, to represent a night scene, all one had to do is to load tungsten-type film in the camera and shoot outside fully stopped-down, to underexpose the film and to create a dark, bluish-cast scene. The resultant strong shadows were a bit unconvincing, but that was the only feasible trick for low-budget video.

Nowadays, when one thinks of a night scene, it is a grainy, greenish-tinted scene, shot in total or near-total darkness. The scene is flooded with infrared light, invisible to the human eye but very visible to the camera’s CCD.

Infrared videography is in widespread use by the news media in surveillance and war footage. This, in turn, is possible due to the wide availability of IR-sensitive CCDs. Actually, standard CCDs love IR light. For normal color videography, a greenish-yellow filter blocks the IR portion of the light spectrum from the CCD. All you have to do is remove this filter, and you have a very sensitive IR detector (see Sidebar 1).

As an effect, like every video trick, infrared tends to get old rather quickly if overused. Careful use gives you some interesting and creative possibilities, which would be very difficult to achieve otherwise. A low-light level (or total absence of light) allows your subject to become less camera-aware and react more spontaneously and naturally. So overall, this is a good trick to have in your arsenal. 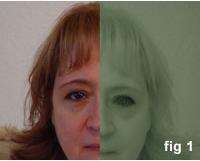 First of all, let’s explain what IR videography is not. It is not the heat-sensing type, which really allows views of thermal radiation in total darkness, with no external illumination required. In this case, the heat of objects and bodies is enough to be detected and converted through image processing into something you can see. This is far-infrared camera work, with operating wavelengths measured in the tens of thousands of nanometers. Because of the extremely long wavelengths involved and the very high detector gain, the images are always blurred and noisy, and detailed images are not possible. Therefore, the use of far-infrared videography is mostly in the realm of police and military surveillance and astrophysics and scientific imaging.

The type of infrared photography of interest for video work (and the subject of this article) involves the use of near-infrared light. This occupies the spectrum just below red (approximately 700nm) to wavelengths slightly longer than 1000nm. These comparatively short wavelengths allow quite detailed images and the abundance of near-infrared light sources (to be discussed below) means that the final images need not be noisy.

One must be aware though, that infrared light will dramatically change the tone of an object, most obviously hair and eye tone, as shown in Figure 1. Foliage appears very bright as well, but this is all part of the infrared look. You can even use this look to create nightmarish moods, if you want.

The most common light source is solid-state infrared LEDs. You can find these in your own house in your TV and VCR remote controls. Stores specializing in video surveillance offer a wide variety of devices in different power ranges, and electronics parts stores and catalogs often sell the bulbs. If one bulb is not bright enough, you can combine them into an array. You may also need to choose the specific wavelength, if you go the home-built route. Solid-state illuminators usually come in wavelengths around 880 or 940 nanometers. The former is usually less expensive, although you may still observe a faint red glow in total darkness. The latter is completely invisible, and the longer-wavelength LEDs are typically more efficient in converting electrical current into photons, a consideration for battery-operated equipment. You might not have a choice: the bottom line is how sensitive your camera is to either wavelength, and some experimentation may be necessary. Figure 2 shows a comparison of the wavelengths of these devices compared to the spectrum of visible light.

The disadvantage of LED-based IR illuminators is that they produce a narrow beam, much like a flashlight or spotlight, and therefore will produce harsh contrast unless you give careful consideration to its location. Setting an IR illuminator is more tedious than setting its visible counterparts. As infrared is invisible to our eyes, the only way to gauge your setup is through the camera’s electronic viewfinder. And some reflective surfaces that may normally appear light may be actually quite dark when seen through IR. 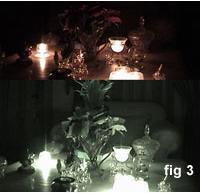 Natural lighting from the sun is an excellent source of IR light. Even small amounts of sunlight entering a room can provide acceptable images. Shooting outdoors is usually not feasible, as the intense sunlight will completely blind and perhaps damage the CCD, unless you are shooting at twilight or under a heavy cloud cast. In any instance, it is advisable to employ an IR filter when using sunlight. A suitable filter, like the Hoya RM72 or Wratten 87 will block wavelengths shorter than 720 to 770 nanometers. There are longer wavelength filters like the Wratten 87A, but these are usually too restrictive, especially if employing infrared LEDs as backup illumination. In any case, if no infrared filter is readily available, a deep red filter like the Wratten 29 may be sufficient in most cases.

Fluorescent lights as IR sources are unpredictable, depending on the phosphor type, so it is best to avoid them. Incandescent lightning is also a very effective source of IR light, and it is amazing how small-wattage bulbs will provide perfectly adequate illumination. Some of the higher-powered infrared illuminators for surveillance use are actually highly-filtered incandescent lights, and no additional camera filter may be necessary.

Whether it is candlelight, a campfire or even a barbecue grill, fire (considered an almost useless light source for conventional photography for its orange-reddish cast) is nevertheless an excellent infrared source. Images appear harsh but omnidirectional, and the lighting effect is exactly what most people associate with night scenes. Figure 3 shows a typical night scene shot both in normal and infrared camera mode, with a few small candles as the only light sources. The detail in the color photograph is negligible, except in the very close vicinity of the candles. On the other hand, infrared light reveals most, if not all, of the foreground detail and some additional background detail.

One last word, which to some may be obvious: Do not focus on ambient light and then lock the focus and shoot with IR light. Depending on the wavelength and type of lens, the focus point may shift. Always focus with the light you are planning to shoot with. Some lenses have engravings showing the IR focus point if manual focus is desired.

The bottom line is that infrared videography will expand your shooting choices and moods, if employed wisely. It requires some experimentation, but this is part of the challenge. Happy movie making!

Fernando Garcia is an electronics engineer and photography enthusiast.

*WARNING: We are emphatically not recommending you do this.*

The CCD in your camcorder is already very sensitive to IR radiation, but an internal glass IR filter blocks most of this spectrum. Camcorders that have an IR night mode remove this filter when that shooting mode is engaged. Theoretically (did we already mention that we are not recommending you do this?), one could hack a camcorder and permanently remove this filter from in front of the CCD. A Google search will turn up plenty of amateur camcorder surgeons who have (more or less) successfully hacked their old and expendable camcorders.

Almost all camcorders have a low-light or night mode, but decoding what that means can be tricky. If a camera has a full-color night mode, it means that the shutter slows (usually to 1/4 second) to produce Max Headroom-type stuttery video. Look for camcorders with an explicit IR night mode if you want to shoot in complete darkness. Often, these cameras have an IR LED or two for illumination right on the camera body.

If your camcorder does not have an IR night mode and you really can’t afford the risk of an IR filter hack, you could get an IR surveillance camera. These tiny devices shoot a relatively low-resolution image and the quality is not that great, but they come ready-made to illuminate in IR and output a video image via an RCA jack or S-video to your camcorder’s video input jacks. This depends, of course, on whether your camcorder can record from analog sources.