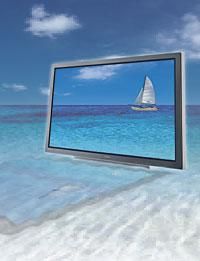 If you’ve seen a high-definition (HD) television program on a wide screen high-definition TV and said, "Wow!" then you already know what HDV looks like. HDV? Don’t run to your dictionary. If you find it, HDV will be defined as the Hepatitis D virus. In the past, no one in his right mind would have wanted HDV. But JVC, Sony, and an increasing number of editing software companies are investing in a different kind of HDV in the hope that it will sweep through the video industry as DV did in the late 1990s.

If you’ve just finished paying off the second mortgage on your house, the one you took out to buy a complete DV system, you may be breaking into a cold sweat. Are the days of DV numbered? Will your footage be unwatchable after seeing HDV? Well, there is good news and good news. The good news is that DV cameras shoot great pictures, and at this early stage in HDV’s evolution, the quality of DV is more consistent. The other good news is that when HDV looks good, it looks incredible.

How high is high-definition?
In July of 2003, Canon, Sharp, Sony and JVC announced the new HDV format. It records and plays back 720p and 1080i high-definition video on DV tape, and is targeted to consumers. HDV is an open standard, like DV. You do not have to stay with one brand to use the format. HDV is DV on steroids: Its compression technology is based in MPEG-2 which allows you to put an hour of great-looking footage on a tiny mini DV tape. HDV marries steep compression with a lot of data going down the pipeline between your chips and the tape. DV records relatively uncompressed video at 25Mbps. HDV records at as much as 19Mbps, but the highly compressed video contains more pixels and more information.

Before opening your checkbook, whisper to yourself "resolution isn’t everything." It’s important to weigh the benefits of the higher resolution of HDV against the features of the equipment currently available, before deciding whether it’s the right time to buy.

The camera has some drawbacks that make it a mixed bag, not least being the price. Originally listed at $3,595, it is now remarkably lower at about a thousand dollars less, which certainly makes it more attractive. But the HD1 is contrasty, which means you may lose details in dark areas of the picture, and blow out whites in the lighter areas. A Tiffen Low Contrast filter will reduce the contrast ratio, lessen the harshness of any blown out white areas (the filter adds film-like halation) and brings up details in the shadow areas. They come in strengths of one through five, one being the lightest.

In HD mode, you will be shooting progressive frames. The ideal shutter speed is 1/60th of a second in this mode. When you lock in the shutter speed, however, the manual iris control is defeated. This makes shooting in backlit situations particularly burdensome. The camera’s single chip delivers color resolution that is not quite as good as standard-definition cameras in the same price range, especially in lower light conditions.

JVC has subsequently released a second generation camera, the JY-HD10U, listed at $3,995, which adds a color bar generator, XLR inputs (although audio is still unbalanced), a higher resolution view screen, the ability to see audio levels on the screen (although you cannot control the level of the audio inputs), and most importantly, has lowered the edge enhancement of the HD1 which gave that picture a less natural look.

The price point of the camera limits its consumer appeal while its more consumer-ish features limits its prosumer/professional appeal. It certainly isn’t for everyone, but it may still be for some. Darren Kelly is the owner of HDVtraining.com, a company which produced an instructional DVD last year on how to get the most out of shooting HDV. He says, "The camera is a great tool, but needs a little assistance in getting the most out of it." According to Kelly, the camera doesn’t lend itself to point-and-shoot. "You need to think about the lighting, the shutter speed, and the aperture." To get the best image, he recommends one think about it like you would a film camera. "Take time to think about the shots… (but) can you run and gun at a wedding? Sure." Kelly says there is still a major "wow" factor when viewing some images from an HDV camera. "We compare it to a PD150. The resolution jumps out at you. True sixteen by nine CCD and lens combination. In that price range, no one else does that."

JVC also has a portable HDV Recorder Player, the CU-VH1US-P, which has a ton of great features at the price of $1,995. If you want an HDV camera, JVC is still the only game in town. Editor’s Note: At press time, Sony had just announced its new HDV camcorder, which is reviewed in this issue. Turn to Page 10 to read more about this camcorder.

Editing Software
There is now significant support for editing HDV content. Expect to purchase more hard disk space if you are digitizing significant amounts of material and you will need a high-performing computer if you are handling multiple streams of HDV footage. Since MPEG-2 looks at the changes between frames and looks at "groups of pictures" (GOP) to determine the make-up of any one frame, software applications need to analyze changes over several frames in order to reconstruct any one frame. This means that even for simple cut edits, a lot of number crunching goes on when editing HDV.

For example, Sony Pictures Digital Networks Vegas 5 supports HDV, but you will either need to digitize using JVC’s capture software or import and export using CineForm’s plug-in product, Connect HD. If you use Adobe Premiere Pro, both CineForm (Aspect HD Pro: $1199 including Adobe’s Premiere Pro, Encore DVD and Audition) and MainConcept (MPEG Pro: $349) offer plug-ins for you as well. Avid Xpress Pro 5.0, expected to ship late this year, will support HDV. Ulead has a plug-in for Media Studio Pro 7 that enables it to edit in MPEG-2 for $299. Final Cut Pro users can capture using Lumiere HD at the price of $179.

Editing Hardware
If it was true for DV, it’s twice as true for HDV: the best way to a high-performance editing system is to buy a turnkey: a computer built for the purpose by people who know what they are about. At this writing, system integrators like Boxx, Core Microsystems and 1 Beyond already have HDV systems in the market. Others like DVLine, ProMax and DVGear are sure to follow.

When will I be ready for High-Definition?
A better question may be: when will high-definition be ready for you? If the brief history of DV is any indication, consumers can expect to see more and better choices as companies roll out new features and capabilities in HDV.

The equipment out now is good enough to make and edit some amazing pictures. If you are shooting in conditions that the current gear handles well and can exercise control over shooting conditions, you may be able to capture great looking HDV footage today. The longer you wait, however, the more equipment choices you will have. Pricing will change and you may find a camera better suited to your particular style of shooting.

When considering HDV, it is important to be specific: Don’t get HDV (Hepatitis D). But be warned, the other HDV (HD video), may lead to dropping jaw, salivation, and an urgent desire to reach for a credit card.

Matthew David Wachsman is a filmmaker, cinematographer and writer living in New York.