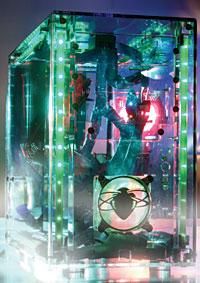 Modifying stock equipment is a long-standing all-American concept. In the early 1960s, Tom Wolfe wrote about some of the first automobile hot-rodders, in "The Kandy-Kolored Tangerine-Flake Streamline Baby," a famous article for Esquire. Since then, hot-rodding has spread to motorcycles, electric guitars, skateboards, and now to computers. The practice is called modding.

Apple’s mid-1990s release of the iMac forever broke the tyranny of beige when it came to computer cases and put the idea of personalizing a computer into many, dare we say "envious," PC hobbyists who were already building their own machines. While the vast majority of personal computers continue to be housed within dull, boring, beige cases, the last remaining archetype from the Jurassic days of the first IBM PCs (some twenty years ago) may be on the way out.

Of course, what’s under the hood has changed radically as well. These days, most computer upgrades need little more than a Phillips head screwdriver. And there are a lot of potential upgrades for personal computers, depending upon what it is you’d like that computer to specialize in.

As a result, the modding industry has tripled in the last five years generating revenues in the hundreds of millions of dollars, according to a February report in Florida Today.

Case Study
Perhaps the most dramatic change in appearance is the case. StarTech.com, as just one example, through their aptly named Mutant Mods division, offers wild possibilities for radically changing the appearance of a PC.

Start with a clear acrylic PC case and then drop in some fluorescent light tubes and even self-lighting cables. If you’ve got the tools, experience and guts to pull it off, you could create a mod like this yourself. Just cut squares out of a traditional case, cover them with sheets of clear acrylic and run the lighted tubes and cables through the box. True modders enjoy this sort of thing, but whether you use a reciprocating saw or whether you use your credit card; customization is the name of the game.

Tarun Bhasin of Mutant Mods says that the origin of these types of mods was, as it is so often with computers, the gaming industry. "The gamers used to soup up their computers, basically for performance. Now we’re seeing this market move more mainstream. And regular people like you and me want their computer to look different. So they’re using things like tubes, cases and even fans that light up to make their computers really stand out."

Abbey Road on a Hard Drive
Of course, a lot of modding is done to a PC for more than cosmetic reasons: performance is where it’s at in both cars and computers. To convert a machine into one that’s capable of serious audio and video editing, sound and video cards are logical upgrades.

Let’s start with the sound card. Today’s computers are capable of performing like sophisticated multitrack recording studios. Programs like Propellerhead Reason, Cakewalk Sonar, and Sony ACID can turn a PC into a sophisticated recording studio. Yamaha has even introduced a program called Vocaloid that is a software synthesizer that will sing lead and background vocals, including the lyrics. One man bands, working alone on their computer, are creating compete professional sountracks. Multitrack recording programs can also layer dialogue, sound effects, Foley tracks and all the other layers of sound that men like Walter Murch and Ben Burtt began to introduce to Hollywood in the 1970s.

Sophisticated programs such as these require a high-powered soundcard. The key enemy is latency, which is the delay of the computer and the sound card when recording live audio. While Creative Labs Soundblaster series remains the most popular aftermarket card line, these are still semi-professional and often have just enough latency to bother truly professional musicians. We’re only talking a few tens of milliseconds here, but timing is everything in music.

If you are going to be recording live audio into your sound card while listening to the playback from tracks you have already laid down, you might want to consider a more professional (and more expensive) sound card. One popular brand is M-Audio. Their best cards contain multiple XLR inputs for professional microphones, traditional quarter inch plugs and digital inputs, among other things. Several of their cards include control and input boxes that mount in the front of the computer giving you much easier control and access to the inputs.

Another option to bring sound into the computer is a mixing board that plugs into the USB port of a computer. Tascam makes a popular mixing board, the US-428, which combines two XLR, four quarter-inch inputs, digital in and out, two headphone jacks, faders and a jog shuttle wheel. If you need to record several musicians simultaneously or several actors dubbing lines, this option is certainly worth checking out.

Picture This
As George Lucas is fond of saying when he’s promoting his THX sound system "Sound is half the movie." Of course, the picture is the other half and a good high-end video card might be what you need for 3D modelling, rendering and animating.

Since the mid-1990s, ATI Technologies has been making a whole line of popular replacement video cards. Their All-In-Wonder series combines S-video and composite inputs and outputs, a TV tuner and capture software and basic video editing software. Later this year, ATI plans to debut a card for capturing HDTV on a PC.

The primary reason you might need some more video card muscle is for 3D, and Nvidia has been neck and neck with ATI in that realm. As with so much cutting edge technology, 3D exploded onto the mainstream market for gaming, but as it became more powerful, it became useful for 3D in CAD and animation. There are plenty of serious professional software applications that can take advantage of hardware rendering on the latest 3D-video cards, including some video editing software.

The Burninator
Adding a DVD burner to a PC isn’t that difficult: if you have a fairly new computer, you shouldn’t even need to install any software drivers to make it work. As with CD-R burners when they first appeared, DVD-R drives have dropped significantly in price over the last year and you can find 4x models for under $100 without too much work. Ultimately, video hobbyists will want to get some software to create DVD-video discs, which can be a complex decision, but the hardware is easy to select.

The Easiest Upgrade
Not sure where to begin? Perhaps the easiest first upgrade to a PC is installing new RAM (random access memory). A/V applications typically need lots and lots of RAM and few upgrades are easier to install. Most computer stores will be happy to help you figure out which type of RAM your PC needs, but the task is even easier if you remove a stick of RAM and bring it in for comparison. You’re going to need to open the case to install the new RAM anyhow, so you might as well go ahead and bring your older RAM in with you. Budget-wise, RAM is cheap and, better still, it is additive, meaning that you typically won’t replace your old RAM, but will instead add new RAM right along side it.

The Fast and the Furious PC
With the combination of a snappy case, psychedelic lighting and some quick DIY upgrades, it’s possible to build a computer that’s a fast and furious Kandy-Kolored Tangerine-Flake Streamline Baby of your own. It may not have a nitro-fueled V-8 hemi engine, but if can still fly.

Ed Driscoll is a computer consultant in the consumer electronics industry.