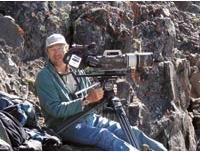 Eight months in the backcountry wilderness of Yellowstone hunting grizzlies with nothing more than a Canon XL1s is literally a walk in the park for Wyoming native Shane Moore. In fact, he’s most at home in challenging environments, whether at the top of the steamy canopy of the Amazon rainforest or under the ice in the Arctic. Adventurous yet pragmatic, he let us in on his techniques as he was wrapping up his latest documentary on grizzly bears in Yellowstone that will air on PBS’ NATURE in the near future.

The Beaver Wrangler
Today, Mr. Moore is an award-winning cinematographer who has worked on dozens of films that have appeared on PBS, the BBC, the Discovery Channel and National Geographic. He started out as a youngster in Wyoming in the early 1970s assisting film crews from Wild Kingdom and Disney. "My first job was as a beaver wrangler, actually," he remembers. "In those days, lot was done with captive animals." His interest in film brought him to UCLA’s film school, but his love of nature brought him back to the University of Montana, where he completed a degree in wildlife biology. After globetrotting with Emmy-award winner Wolfgang Bayer for ten years shooting over 50 productions, Mr. Moore struck out on his own.

Film v. Video
"For my entire career, I shot with an Arriflex [film camera], which, you know, you can pound nails with that thing." Mr. Moore recalls. "My initial reaction to most video cameras has been, ‘Boy, what a fragile, plasticy device this is.’" For the last two years, however, he’s been using a single Canon XL1s Mini DV camcorder for "…lots of backcountry, lots of horseback stuff, lots of pounding on snowmobiles. I was concerned about sub-zero temperatures, again, no problem. I’m waiting for the other shoe to drop, but so far, so good."

There are other reasons Mr. Moore shoots video. Video cameras are lightweight for one. He also figures that the great low-light characteristics of a good video camera give him an extra 20-30 minutes of shooting time at the beginning and ending of the day. "Particularly when working with predators like wolves and grizzly bears, that’s often the magical 20 minutes." Videotape itself is also much more convenient. Not only are you able to review and edit right away, but you can run much longer without changing your media.

"Typically, even on a week or ten-day trip, I’d carry four of the large batteries and that was certainly more than ample." Mr. Moore reports. Other than his normal camping gear, he could get by on nothing more than a "half-dozen tapes and a first-aid kit." The technology was not really an issue. "Often we were working in very steep environments, we thought we’d be worried about the grizzly bears, but in fact we were much more worried about lightning storms and rocks falling off mountains."

Long Lenses
For his current project, Mr. Moore chose Mini DV and the Canon XL1s in particular, "…because of the interchangeable lens, it offers tremendous magnification. The bread and butter for me has been the Canon 150-600mm." His favorite still-camera lens is long, heavy and expensive, "We had some custom mounts [built by Ron Armstrong] made for the XL1 to take these big lenses. Obviously with these magnifications, you need a big tripod. I’m a Sachtler fan, the 18 or 20 series tripod heads." At roughly $7,000 for an equivalent Canon lens and another $6,000 for a Sachtler tripod head, the $3,000 XL1s camera body is a real bargain. "It’s really starting to dominate in the wildlife end of things."

A solid tripod was critical to the shoot, but image stabilization was less so. Often, with the specialized lenses, the Canon optical image stabilization was just not available. "Basically, the name of the game for us with these tremendous magnifications is to get out of the wind as much as possible." Mr. Moore also had to film very early and very late and heat waves were sometimes an issue.

Sync Sound
"We did a lot of run-and-gun type work. It’s an issue-driven kind of show and syncing sound with film would be really kind of a nightmare." Traditionally, an obtrusive clapper is used to sync the sound recording with the film. "The biggest surprise for me growing up shooting film is, all of a sudden, being much more low-key with video. It’s amazing, we actually have humor in our films now."

"We’re using Sennheiser microphones, both radio microphones and shotguns with the Lightwave [Audio] Systems [wind screens]." Mr. Moore has done a tremendous amount of sound work over his career, "I’m still handling the sound the same as I would on film. That is, getting lots of clean ambient tracks." Mr. Moore continues, "Frankly, I think that the sound is great, once you can isolate the microphone from the camera." And get out of the wind, of course.

Most of the aural magic in a wildlife documentary happens in post production. Besides the obvious voiceover narration of most documentaries, natural and realistic sound is critical. "If I’m shooting a bear at 400 yards, I’m not getting any usable sound," Mr. Moore points out. Instead, an ambient track might be recorded in the field, perhaps very early in the morning, even before there is enough light to shoot video, "That’s often when the sound is best." Then, back in the studio, much of the action is recreated, from an elk charging through water to a bear ripping open a rotting log. "Our sound is very similar to the film strategy, except that we’re recording digitally with the camera. It’s much easier." Mr. Moore concludes.

Narrative Structure and Surprises
To viewers, it might seem like a documentary is about whatever the camera happened to serendipitously shoot. In reality, the narrative structure is planned out in as much detail as possible before a single frame is recorded. "We were after very specific shots." Mr. Moore explains, "There’s a very big debate in the Rocky Mountains to whether [the grizzlies] have recovered and should be removed from the endangered species list. So that’s what our film is about."

For example, one of the important issues is the grizzlies’ food supply, so Mr. Moore knew before he started shooting that he needed plenty of material to cover that concern in detail. More than just the bears, the film is about their interactions with humans. And it’s about the scientists that study the bears. "It turns out that after 30-odd years we’ve finally figured out that one of the most important foods for these bears [is elk]." If it took scientists that long to document this behavior, imagine how difficult it must be to observe a hunt, much less get it on tape, much less get a good shot of it on tape. "We actually had to film the bears hunting elk calves in the spring. I think people just don’t realize that these nature films, where you’re trying to film these grizzly bears actually hunting, take a tremendous amount of time." Specifically, 250 days in the field for this one.

The Edit
With digital video and modern computers, the editing process actually began mid-way through the first year of shooting. In the past, Mr. Moore’s team used an Avid system, but his most recent project utilized Final Cut Pro. "Editing DV has been really a wonderful process. We’ve been able to keep up editing as we’re going along and see how the story is progressing." Altogether, editing is about a six-month process.

Although the structure of the documentary was extremely well planned, a lot changes during the production. "We start off with a tight story and, invariably, it changes," Mr. Moore explains. "I think that’s what people are interested in: What does someone who has really been lucky enough to look at an issue in depth think at the end of the day? And we learned a lot."

Mini DV: The Right Choice
The basic camera Shane Moore used on this project is not cheap, but it is certainly cheaper than an Arriflex and film stock. Maybe you don’t have 250 days you can spare next year to shoot your own documentary, but Mr. Moore found that there were people on vacation with quality equipment and solid fundamental shooting skills getting wonderful opportunistic footage. "There are quite a few people out there, serious amateurs, that are doing some great work. We were able to hire them and in some cases buy their footage and integrate it very smoothly into our program, which we wouldn’t be able to do with film." Mr. Moore encourages.

"Frankly, I’ve shot things on film and even transferred to HD and I looked at some things side-by-side with some stuff that originated on Mini DV. I was really frustrated by how good the Mini DV picture was, particularly for really long lens work." Mr. Moore concludes. "I think that, optically, for long lens work, the Mini DV format is really exceptional. It really shines."

[Sidebar: Shane Moore on NATURE]
Mr. Moore has worked on so many films that it would be impossible to list them all, but here are a few he’s produced for NATURE on PBS:

Years ago, I was on a team of shooters on a wedding reality series produced for a regional lifestyle network.