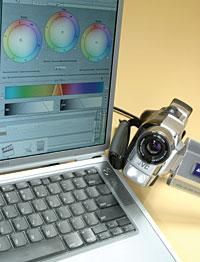 If you’ve seen Oh Brother Where Art Thou or The Lord of the Rings, or even an Infiniti car commercial, you know we’re long past the convention of realistic color (which, in fact, was never truly realistic). This is the day of the post-production color stylist, and with simple desktop editing or just your camcorder, you too can tint your videos to achieve a wide range of useful effects. You can control color to bathe your images in atmosphere, to take them back in history, to give them dreamlike or other special feelings, or just to intensify your program’s overall visual style.


If you’re shooting digital, the general rule is, don’t fiddle with original footage. Get the best exposed and color-balanced shots you can and then play with ’em in post. If you don’t like an effect you made in-camera, you’re stuck with it; but if you dislike a change made in editing, you can always revert to the original footage and try again.


Perhaps the most common use for color styling is to create the effect of sunset or the warm-tinted magic hour that precedes it. You can do this by locking white balance at straight outdoor (around 5,000K) and actually shooting in late afternoon light. The result will have that desirable warm glow.


Trouble is, the warmth will increase from one setup to the next as the sun goes down so that intercut shots won’t match. To overcome that problem, you can set white balance manually before every shot. This technique will give you a consistent, conventionally colored original that you can play with freely in post. (In analog mode, try taking white balance from a pale blue-tinted reference card to create a uniform, warm tint.)


The same techniques work for moonlight. Digital producers should shoot the scene straight (during the day) and dial in the moonlight in post. (To enhance the illusion, bump the brightness slightly down and contrast up. For more on this, see the Classic Day-for-Night sidebar.) In analog, you can either set your white balance for indoor light, or if you’re already shooting with artificial light, take manual white balance from a card tinted a pale gold. That will cool down your images to a convincing moonlight. For firelight, you can dial in as much digital coziness as you prefer, but it’s better to do this one in the camera, as we’ll see.

Black and white says "old" (except to Woody Allen) and the quickest way to add "instant past" is by converting your footage to monochrome. If you’re really fussy, judge the results as you shoot by dialing the color out of your reference monitor. Different colors can have similar gray scale values, so the red and green that scream at each other in color can look identical in mono. In post, convert your footage before you edit so you can gauge the gray-scale values as you select each shot.


For a softer effect, try de-saturating your color about 50 percent, for a grayed-out period look (see the Steel Engraving Techniques sidebar for more on this). One common trick is to establish the past by starting in black and white and then dialing, shot-by-shot, up to full color.


Of course, black’s not your only mono choice. For silent movies, a sepia brown monochrome looks good. If you want to go whole-hog, look into plug-ins for digital editing programs that add "scratches" and "dirt" to the supposed "film" original (such as DigiEffects AgedFilm or the Film FX plug-in included with Vegas Video 3.0). Incidentally, if you want to get really picky, the "dirt" should be white, because it’s usually dark spots on the negative, which are reversed in making prints.


In commercials and music videos, you often see fake home movies that are really video processed this way (frequently with black dirt). To do this yourself, adjust the image by increasing color saturation and contrast until the effect is blotchy and the shadows block up. Apply dirt and scratches from a software plug-in, and adjust the frame rate to a 15 frame-per-second speed (close to the silent speeds of 16 or 18 fps). You’ll be amazed at the effect. (Hint: by processing modern footage, you can insert yourself or others into old home movies transferred to tape.)

The movies mentioned earlier were converted to digital video and every scene was color styled before they were copied back to film for release. With much of the footage, the intent was not to paint an obvious color tint, but to impose a distinctive style that creates an emotional effect while, not incidentally, blending a lot of separate elements together.


You can reach the same objective by tweaking the hue, brightness, intensity and contrast settings of your software and applying them to your program (or you may wish to color style one sequence at a time). Different programs use different controls and accept different aftermarket plug-in software, so there are no universal procedures for color styling. Nothing beats fooling around with your program(s) until you’ve identified the tools and methods that work best for you.


Before working on your program, burn a copy of the unmodified original for protection against mistakes. It’s probably a good strategy to do any color styling after you’ve locked down your show. Only by seeing scenes bracketed with the other scenes around them can you judge the effect of your color tweaking.

Color in the Camcorder

In Oh Brother Where Art Thou, the golden leaves behind the sirens in the river were ordinary green before the computers got hold of them. You can change individual colors too, if your hardware’s dynamic enough, but it’s a finicky, tedious process. Basically, you recolor objects in one frame, then the software copies your changes to the same objects in the next frame. Then, you adjust the copies to compensate for movement and so on. At 30 frames per second, you don’t want to fuss with individual leaves. When you want to change colors selectively, it’s better to do it while you shoot. Day-for-night works better this way, as the Classic Day-for-Night sidebar explains.


Firelight effects also work well with an off-camera light source, bathing subjects with light through a heavy orange filter. That way, the room light beyond the fire can remain a contrasting blue. Also, by waggling paper partially torn into inch-wide strips in front of the filter, you can simulate the flickering of real flames.


The same holds true for most selective coloration. Even in the heavily digital movie Moulin Rouge, the blue-tinted closeups against warm backgrounds were generally created in the camera via on-set lighting. The moral of the story: if it’s a wash, do it in post; but if it’s a selective effect on just part of the image, create and record it as you shoot.


And the even bigger lesson might be, no matter what whizz-bang software you command, the older, simpler techniques are sometimes less work and produce better results.