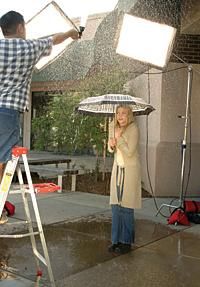 A flash of lightning, a crack of thunder and driving rain fill the screen as the hero slowly makes his way toward the climactic meeting with his nemesis. Tension builds as the storm increases.

Hollywood is masterful at using weather to set the right mood for the story. There is no reason why you can’t do the same. A dreary, rainy day may be just the setting for a sad or depressing scene. Thunder and lightning adds drama to any sequence. A distant wolf cry or a far-off siren is made more frightening on a windy night.

It is easy to think up effective weather tie-ins to your story in the scripting phase; shooting them usually takes some extra effort and knowledge of some tricks of the trade. The following are a few techniques available to just about anyone who wants to conjure up weather on a limited budget.

If you were on a Hollywood movie set when they taped a rain scene, you would see a great deal of expensive equipment in use. They typically have a network of overhead sprinklers set up and a drainage system on the floor. They may also have wind machines and certainly special lighting. Your reaction to all this might be, "What’s all the fuss? Just shoot the scene outdoors when it is raining."

Beyond the fact that rain doesn’t pay attention to schedules, if you were to shoot a scene in the rain, you would find that it wouldn’t register on the tape. You would end up with a dismal gray scene with muted colors. The gloomy news is that there is more to shooting a rainy scene than having rain.

The reason is simple. Water is a transparent liquid. When it is raining, the sky is a dull gray and the light is very diffused. In those conditions, transparent liquids, especially fast-falling liquids, don’t photograph. For the camera to see the rain, it must be illuminated by a strong source of light from the side away from the video camera. The refraction of the water will then cause the rain to show up as white streaks. It helps if you have a dark background to make it show up better.

Since you don’t want to put your lights into a real rainfall if you can help it, shoot your rain scenes when it isn’t raining. (This also helps with the schedule.) Try to pick a spot or an angle that doesn’t look like a sunny day. Shoot at dawn or dusk for best results. Get the most powerful hose and water supply that you can. Attach a sprinkler head and raise the sprinkler up on a ladder or rooftop, then aim the water straight up so it falls back down in a natural-looking way. This will also spread the water out to cover more area. Position a powerful light to strike the falling water from the back. Just make sure you don’t have any light spilling onto the lens. The result should be a convincing rain scene. If you can find a dark background (or better yet, a black-looking cloud with enough of a silver rim to define a storm-cloud shape), the effect will be even greater.

A little thunder and lightning make a rain scene more dramatic. There are two ways you can add thunder to your picture. You can imitate it by suspending a flexible metal sheet and shaking it. This is the classic Thunder Sheet beloved by Foley artists (named after Universal Studios’ technician Jack Foley). But if you live in an area where thunderstorms prowl, you can’t do better than to record the real thing. Place a microphone near an open window as a storm approaches and passes over. You will get distant thunder, nearby crashes and the sounds of the rain itself. If conditions permit, in an hour’s time, you can have a wide range of authentic sounds for editing into your productions for years to come.

The lightning effect is a little trickier, but quite doable. You don’t need to show the streak of lightning, just its effect. You may choose for the lightning to illuminate your subject or just the background. The basic Hollywood technique is easy to accomplish. Set up a bright light as the lightning flash and aim it where you want the effect to appear. It will look better if you can put a light-blue gel in front of it. Turn it on and block it off the scene with a hand-held gobo (a piece of foam core, cardboard or opaque black cloth on a heavy wire frame works well). At the moment you want the lightning flash to appear, quickly remove and replace the gobo. The effect should last less than a second. It is quicker to twist the gobo rather than to whip it out of the way and back again, which might show a telltale shadow.

It is also possible to show the lightning streaking across the sky or striking the ground. Given a suitable long shot, Hollywood wizards would probably just add an appropriate streak digitally. You could do that as well if you have the right software on your editing computer (see ZZZZap! Create Your Own Electric Animation in the February 2001 issue of Videomaker for details).

You can also create a lightning effect the old-fashioned way. Paint an appropriate lightning stroke in white or yellow on a black background. Then take a shot of the artwork. In post-production, superimpose this shot on the scene for just two or three frames. Voila! You’ve created your own completely controllable stroke of lightning.

Classic Hollywood snow, used mainly on indoor sets, was actually a large quantity of bleached corn flakes. These make big, fluffy-looking flakes when falling onto the scene. This is beyond the range of most low-budget videographers. Instant mashed potato flakes scattered in front of a large fan can represent a snowfall as well. While it can be messy, it will work. Use the largest-sized flakes you can find, and buy them in quantity at a warehouse store. This may work if you limit the size of your scene and don’t show the ground. Of course, if you live where it snows, you can get some stock footage in the winter that you can work into future shows.

Fog machines vaporize a light mineral oil with a heat source and then blow it out to create artificial fog. You can get various types of oil with different "hang times." Buying such a machine may be beyond the budget of most videographers unless they have a long-term need for one. However theatrical rental outlets occasionally offer them. Be aware of the nature of the fog; there will be droplets of mineral oil in the air, which may produce an oily odor or cling to things you don’t want them to.

For a low ground-fog, you can put the old theatrical device, dry ice, in water and blow it across the floor with a fan. Even though it hangs low and dissipates quickly, it may be useful to create the desired mood.

One technique for a general fog effect is to use a fog filter on the lens. This is a glass filter cut in a fine design that makes the scene look foggy. You should be able to buy or order one at any well-stocked camera shop. That may do the job, but you won’t get the swirls and eddies you can get with a fog machine. In a pinch, you can smear petroleum jelly on a clear lens filter.

Wind and Other Severe Weather

Short of having a good, windy day to shoot, (which may cause audio problems), creating a scene involving wind can be difficult. Big-money Hollywood pictures make use of large, powerful fans. These are usually beyond the budget of the average videographer. You may be able to get a couple of powerful fans from a rental outlet that caters to the construction trade. A leaf blower could work as well, depending on the size of the area you want to cover. Your artificial wind maker will likely be noisy and require that any important sound be dubbed in later.

If shooting a windy scene is difficult or impossible, you may be able to get the same effect by suggestion; and it may even be more dramatic. I recall a scene in a movie that involved a tornado. You never actually saw the tornado. What you saw was the family going into a storm cellar and shutting the door. Then the audience heard a terrible noise and saw the door shaking as if it were about to be torn off its hinges. This was intercut with the family’s worried faces. It was a very effective scene that did not require any special effects. Sometimes suggestion is the most dramatic and effective way to tell a story.

If you want to heighten the drama with a storm or a gentle rain, you can do it. Just a touch of fog will add mystery. Sometimes all it takes is a suggestion. Whatever atmospheric effects you think will improve the impact of your picture, you can do it with some thought and a few tricks of the trade.

At least half the impact of any scene comes from the sound track. A soft hiss signals a gentle, life-giving rain. Add several crashes of thunder and some wind and the same rain becomes something else. When you observe weather around you, and when you create it for your video, pay close attention to the sounds.

Rain can have several sounds, depending on what it’s hitting. Thunder can be the sharp crack of a nearby lightning strike, or a far-off rumble. Similarly, wind can be a gentle blowing through the trees; a mournful moan as is goes around the corner of an old farmhouse or the hundred-car-freight-train roar of a tornado. Even snow makes a sound, depending on whether it is big, soft flakes or a driving sleet.

Pay attention to the sounds that weather makes, and use those sounds to increase the realism and drama of the weather you create for your videos. And remember, devices that create weather often create noise as well, so be prepared to do audio substitutions in the edit.