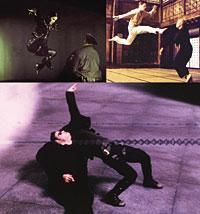 A student’s idea to infuse frozen instants in time with visual movement led to a new cutting-edge Hollywood effect.
You’ve seen the effect: the action freezes, and the videocamera magically moves around the frozen moment. Tossed water, speeding bullets and Super Bowl football players were all suspended in time while the camera moved around the scene. It’s called bullet-time or flow-mo, but how is it accomplished? In this article, we’ll not only show you how the pros do it when money is no object, but we’ll show you how to mimic this amazing effect on your own home computer.

Who was the Brainchild?

The video maneuver can be traced back to 1980, when British art student Tim Macmillan was experimenting with cubism and photography. At the time, he was simultaneously shooting action subjects from two or three different angles and then combining the photos into a collage.

Macmillan’s collages represented the same instant in time, but from different points of view. A puff of smoke and a splash of water took on the feel of 3D when viewed from different angles. The more angles, it seemed, the better.

Then something snapped in his head, and he dreamed up a camera that would simultaneously take hundreds of shots from different points of view. All he needed was about 100 tightly synchronized cameras. As an impoverished student, that was out of Macmillan’s league. But he was resourceful.

He cut a groove down the middle of a 2-by-2 board and painted it, his "camera," black. In a darkroom, he layered a roll of 16mm film into the groove and then a strip of clear plastic as a spacer to give the camera a focal length. On top of that, he placed an opaque tape punched with pinhole "lenses." Finally, he encased the whole thing to make a light-proof shutter. He took it into the studio for a photo shoot and asked his subject to jump in the air. He tripped the shutter and simultaneously exposed every frame on the film strip.

When Macmillan developed the film and saw what he had done, he put aside any ideas of a collage. Instead, he threaded the film into the nearest projector. Incredibly, the sequence of photos showed a scene that was both alive and dead at the same time. They seemed alive with unexpected camera motion, but the movie’s subjects were actually frozen dead in space.

It looked as if Macmillan had grabbed a high-speed camera, strapped a rocket to his back and shot a very slow-mo movie of his subject as he blasted past. Time was frozen, but the camera seemed free to roam.

The young photographer was elated. His experiments were still primitive, but he could easily see the potential. He persevered and created new cameras. He begged Kodak for surplus lenses, and to their credit, they honored his request.Macmillan built a circular camera cluster that could record a 360-degree fly-around. This finally got him some attention. In 1993, a BBC program called Tomorrow’s World featured a freeze frame movie of a dog leaping (with a little help) through the middle of the circular camera. Instantly, people all around the country, worried sick about the dead dog they thought they saw on TV, flooded the switchboard.

Macmillan was forced to do other things to make ends meet, but eventually he came back to the technique, and developed even larger camera systems. He formed a company called Time-Slice Films and started to get assignments.

But there was still a problem. Tweak as he might, it was impossible to get all the cameras pointed at exactly the same spot, with exactly the same exposure. The results were jiggly, which was fine for an artsy look, but didn’t excite professional filmmakers.

Fortunately, people in the computerized morphing and warping business were looking beyond the standard morph shot.

In 1996, Discreet Logic introduced a product called Flame that could track objects, stabilize them and add extra in-between frames to stretch the action. It gave Macmillan the smoothness he needed. He was ready for the big time.

In 1999, Macmillan used his "time-slice" technique in the movie Wing Commander. According to the plot, the ship travels through one of those pesky space anomalies and time gets frozen. This was the perfect scenario for Macmillan. Armed with tracking and morphing software and a new camera collection, he made a "virtual camera" circle around a frozen-in-time crew, complete with floating fluids.

It was an eye-catcher. Macmillan had finally made it.

Other people were discovering similar ideas in the United States. In 1994, Dayton Taylor created a prototype of a camera called the Timetrack. It owed another debt to Kodak, who supplied 60 of their Funsaver cameras. Taylor’s apparatus snapped multiple freeze-frames on a continuous roll of film threaded through all 60 cameras.

Around the same time in France, a director named Emmanuel Carlier shot with an array of 50 cameras. Also in France, director Michel Gondry shot commercials and music videos that showcased the effect. It was Gondry’s Smirnoff ad that stopped a bullet in mid-flight and led to the new term "bullet-time."

And then came the recent Gap ad. Stopping a jitterbug in mid-air caught everyone’s attention. There was no turning back.

The ante was upped considerably in the movie The Matrix.

The director wanted to emulate the fantastic, flying kung-fu moves seen in comic books. Time-slicing was the obvious choice, but involved a big problem: it was necessary to shoot the carefully choreographed scenes against a blue-screen. How in the world would they possibly match the movement to the background plate?

Computing power came to the rescue. The special-effects team photographed every part of the interior and fed the stills into the computer. By stitching and stretching the images, it textured the 3D virtual world to look just like the real thing.

The environment ensured, the cameras were arranged to match the motion. Once again, the computer came to the rescue. With a 3D model standing in for the star, Keanu Reeves, the computer calculated the exact positions required for each camera in the shot. Positioned accordingly, the cameras were aimed with laser guides onto a target in the center of the stage. Then Reeves suited up and hung by wires to do the fight scene against his movie opponent.

For each take, both the beginning and ending cameras in the array were started. For the freeze-frame, the still cameras all flashed in sequence. By sequencing the cameras, they could perform slow motion as well as freeze-frame. The shots were color corrected and stabilized and extra, in-between frames were added to smooth the motion. Finally, the computer-generated backgrounds were rendered and composited with the foreground. The result was hyper-real.

Now you know the secrets behind one of the most technology-intensive special effects of all time. Obviously, this isn’t an amateur project. But before you despair, keep reading you can do some very cool bullet-time shots on your home PC.

You don’t need a million-dollar budget to create this cool effect. While it may not look quite like the big-dollar effects you are used to seeing on television, you can pull off a nifty looking effect with a little ingenuity.

To start, set up several camcorders in a semicircle, point them at a central subject and roll tape on all of them simultaneously (see Figure 1). While the cameras roll take a flash photograph of your subject as he jumps into the air. Next import a few seconds of footage from each camcorder to your nonlinear editor and identify the same frame on each tape using the camera’s flash as an indicator. Export each frame as a still and then re-import them, placing them on the editing timeline in sequence. Stretch each still frame to three or four frames to extend the duration of the effect. Because there are 30 frames in every second of video, a shoot using 10 camcorders to produce 10 stills, each set to three frames on your timeline, would result in a one-second effect.

To make the effect more fluid you’ll need some morphing software. Michel Gondry used this technique to great effect in his excellent music video Like a Rolling Stone in 1995. Basically, there just wasn’t enough money in the budget for a multi-camera rig, so he opted to use the morphing trick. You should try it too! Elastic Reality is a perfect choice for this, but other programs are available. Basically, you’re going to morph each shot into the next by correlating similar objects in the two images.

When you play your project back, you should get an excellent bullet-time shot, usually with a little artistic warping thrown in to boot.