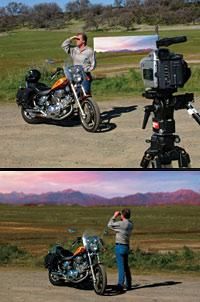 Many of today’s eye-popping visual effects have their roots in special effects crafts that go back almost to the beginning of movies. Digital set creation where entire landscapes, cityscapes and backgrounds are produced on the computer is merely the latest incarnation of the traditional matte painting used in Hollywood’s early films.

Before there were computer generated images, there were artists painting on glass to add and mask images in a scene. The basic techniques of matte painting have survived with only minor variations until the present digital era.

Obviously, the wonders of digital video effects are available to anyone with a computer, camcorder and a little time and money. But not everyone plying the video trade is ready to jump into the world of digital imaging. Creating matte effects can save you the learning curve it takes to figure out how to use the software programs that create effects like these. And, making a matte effect can be just plain fun. But first, let’s take a look at the history.

Back When I was a Kid


The earliest form of matte painting in film was the glass shot. The process for the effect was very simple a piece of glass was placed between the camera and the scene. Any real scenery the filmmaker wanted to replace was behind the painted area on the glass, so the camera saw only the painting rather than what was behind it. Everything else in the shot, such as talent, was visible through the glass. Good examples of the technique are in many early Hollywood sci-fi flicks. Shot in a barren desert, glass mattes allowed for the addition of otherworldly structures, spacecraft and vegetation into existing scenery.

Another approach to combining live action and painted mattes was the miniature rear-projection process. In this technique, the film with the action of the actors was projected onto a small screen and framed by a matte painting, then the painting and the film were photographed together. Used properly, this process allowed for some very complex shots. The original King Kong relied on this technique heavily, making it possible to incorporate animation, puppets and other foreground objects into the film while projecting "tiny" people into painted matte landscapes.

Other ancillary inventions also enhanced the glass matte process. One device, called a "roundee-roundee," rotated a glass matte in front of the lens. In the film 2001: A Space Odyssey, they used this device in the famous shot of a pen floating weightless in a space shuttle. In that case, they attached a real pen to a rotating glass, and then the actor playing the flight attendant plucked it off at the appropriate moment.
Simple Mattes for Everyone

These examples might sound complicated, but they are all variations of the same idea: adding an image to enhance a shot. Anyone can use this technique as a low-cost alternative to expensive effects.

Here’s a simple way that you can use this technique yourself. Let’s say that you want to add a beautiful blue sky to a drab gray day. Or perhaps you just want to cut out a messy background full of telephone wires and trees. It’s possible with some basic equipment.

1. First, you’ll need some glass, plexiglass or foam core to mount your picture. You’ll need a piece large enough to hold the image. A storm window or large picture frame will work fine if you choose the glass method.

2. Then find a photo of a blue sky. The bigger the picture the better because larger photos are easier to frame. You can use images from anywhere – images from calendars or posters work great.

3. Then you’ll want to find some kind of horizontal line in the scene that you can match the photo up to. A fence or top of a building works great.

4. Next, cut out the portion of the photograph that you want to use, and mount it to the glass or foam core.

5. The matte will need some kind of support to hold it upright. A C-stand is a great device for this, but any creative supports you come up with should do the job. An eye-level height table with a couple of sandbags to hold the glass also works; though this arrangement limits your versatility in making minute adjustments.

6. The next step is to align the photograph so it matches the horizontal line of the fence or landscape in your shot. You can experiment with different distances between the matte and the camcorder to get the optimum blending of the two scenes. Verifying placement of the matte with a monitor is vital. While you can get a pretty good idea of how the whole shot fits together in the viewfinder, many details (and mistakes) will not be visible until observed in a larger format. For example, if the matte is at the wrong angle to the light, the camera’s reflection may show up in it, which might be difficult to see in a small viewfinder. The monitor also helps when lighting the matte. Light the painted images either naturally by the sun or with lamps from the sides. Lighting has to be particularly bright to allow for enough depth of field to hold both the painting and the scene behind it in focus.

7. Once it’s set up, add the actors and the action to the scene. Make sure they don’t get behind the matte, or their heads will disappear into the sky. This type of matte works great for quick shots. If you linger on them too long, the audience will begin to suspect something is not quite right.

This simple and fun technique is great for adding distant landscapes to backgrounds. However, you can also use it to block out unwanted objects on a location or to add things to a shot that aren’t there.

The use of the matte opens a whole new world of effects to the video producer. Sure, it’s not as slick as desktop production effects. But its old-school style and hands-on technique require more front-end thinking and preparation from the person behind the camcorder. But if you try it, we think you’ll find that the magical results, combined with the low cost, make it well worth it. Overuse of this technique will surely give the effect away. However, with prudent application, your audience will never know.