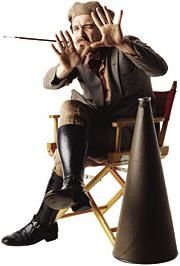 In the 1973 movie Day for Night, Francois Trauffaut tells the story of a man who just wants to make movies. This classic film is a must for every aspiring auteur, as it takes the audience behind the scenes of many classic movie tricks including an old favorite, shooting day for night.

Shooting day for night is simple to describe: you shoot during the day, but darken the results enough to make it look like night. The hard part is explaining why one would do such a thing. So I was thrilled when CB Wannaby told me he was planning several such shots for his latest straight-to-video horror epic, Dreadfully Dark, Part 9. Having seen the earlier masterpieces of this series, I was surprised to find out just how much footage was shot day for night.

CB lives to make movies, any kind of movies. Not necessarily good movies. His hero is Roger Corman, the king of budget thrillers, who once made a movie called The Terror in four days with Boris Karloff and Jack Nicholson, no less. Oh yeah, someone named Francis Ford Coppola helped direct this opus. They shot one step ahead of the studio crews who were tearing down the sets of his previous movie, The Raven. Shooting on this kind of schedule, directors will shoot day for night without even a second of hesitation.

"Why not just shoot at night?" I asked. CB looked at me with his usual mix of condescension and irritation. "It costs too much to shoot at night. Plus, night shooting irritates the heck out of my crew they insist on having a life. Another problem I have with shooting video at night is just seeing the shot in the viewfinder. CCDs are not really intended for low-light situations. Basically, I try to avoid it.

"Can I come along on the shoot tomorrow? I’m writing an article about day-for-night shooting for Videomaker," I pleaded.

"I’ll probably regret this, but OK. Just remember to plug my new movie and you got a deal," he said.

Why Day for Night?

The next morning I found myself at the edge of the woods near town. CB welcomed me. "Watch your step, klutz-head those black things are called cameras and they cost me plenty!" I knew we were off to a good start.

CB introduced me to the actor who plays Dr. Dread. His makeup reflected all the horrible things that had happened to him in the previous eight episodes. However, up close and in person, it looked bogus. "Don’t look too close," CB said. "The main reason that horror movies are so dark is that most people are afraid of the dark. Of course, it also helps to cover a lot of sins in the makeup department.

CB took me aside and whispered in my ear. "By six o’clock tonight, Dr. Dread over there will be too tipsy to read his lines. No one else is too thrilled about working through the night either. So night shots are out. What’s a director to do? So, now you’ll get to see how we make the magic!"


CB screwed a neutral density filter onto the front of the camera lens. "This is an ND4, which will knock the light down a couple of stops," he said. Then he color-balanced the camera with a yellow card. "This will tilt the color spectrum to blue. Most people think of moonlight as slightly blue, so this makes the effect more convincing.

"Couldn’t you just use a blue filter?" I dared to ask.

"Are you going to be asking a lot of questions?" CB asked, looking pained.

"Alright. But you better plug the movie. Yeah, I could use a blue filter. But I like the flexibility of tuning the white balance, which is a lot easier than switching filters."

"Couldn’t you stop down the lens to make it darker?" I asked.

"Sometimes I do," said CB with a sigh, "depending on the effect I want. The ND filter cuts out the light, causing the aperture to open. That gives me a short depth of field, which looks good in a horror movie. I don’t want the focus to be too sharp, especially with our cheap I mean economical effects.

CB pointed to the woods. "In this scene, Dr. Dread is running from the cops and the dogs. We’re going to be shooting toward the sun, which will give us sharp shadows and backlighting on the actors. Of course, real moonlight doesn’t always come from behind, but fully-lit subjects just don’t ‘feel’ right as night shots."

The crew laid the dolly tracks through the woods, and soon the camera was in position. CB took a quick ride on the track, making sure that the camera never pointed directly at the sky, which would spoil the illusion. The day sky is brighter than the surroundings, while the night sky is darker. Shooting day for night works well in the woods because moonlight casts shadows just like the sun. But moonlight doesn’t light up the sky like the sun does, so you have to keep it out of the shot.

CB approved the setup and the dolly was set in position. The sound of the clapboard echoed off the trees, and the dolly started to roll. CB made one long dolly for Dr. Dread (with the police on his tail) and then a second one for just the police and barking dogs. "I’ll intercut this action in the editing room," he said.

At one point in the shot, Dr. Dread breaks into a clearing. I could see the police and the dogs catching up in the distance. "Here’s a place where day for night is especially valuable. If I had to do this shot at night, I’d never be able to see the background action. I’d have to light up the whole blasted woods and bring out a generator." CB was not known for lavishing a lot of money on his movies, so it was easy to see why he preferred using the free sunshine to bringing in a bank of expensive lights.

The next shot took us to a beautiful, placid lake. I knew that the day-for-night shooting would soon turn it ominous, but I had a question. "Didn’t you just tell me you can’t include the sky? How can you avoid it here?" I asked, pointing to the featureless horizon.

"Look and learn, sonny," he said. "Ever hear of a matte box?" CB attached a black box to the front of the camera. "This is a graduated filter," he said, holding up a square of tinted glass. It was dark at the top and lighter at the bottom, with a narrow blended section in the middle. CB positioned it in the matte box and moved it as he looked through the camera. "There!" he said, Check it out.

I looked through the lens and saw that the dark part of the filter made the sky almost totally black, while the lake and the shore were comparatively lighter. "Notice that I put the horizon high in the frame. You don’t want your live action to span the graded part of the filter which would give it away. So I aimed the camera down a bit to provide a lot of room for the action on the lake."

The clapboard snapped and Dr. Dread got in the boat, sped it to the center of the lake and dropped a bag overboard. I didn’t even want to know what was supposed to be in the bag. "Since this is a locked-down shot, I might even add a moon in post-production," said CB.

"You mean digitally?" I asked. "Yeah," he said, "If my nephew’s computer isn’t on the fritz. That’s the part I just love about shooting video I can use a PC to process it. That would cost a fortune in film." CB is nothing if not thrifty.


Later in the day, toward dusk, CB wanted to get some nighttime establishing shots. "Technically, this is called dusk-for-night shooting, and the idea is just like day-for-night. However, there are some things we can do at dusk that we can’t do in direct sunlight.

For instance, I want this neighborhood to look like it’s pitch dark and the only lights are from the houses and cars going by. No matter how much wattage you’ve got in a window, it can’t compete with the full sun. But at dusk, you’ve got a chance.

"I’ve asked permission to put some lights in these houses and I’ve got the car headlights on high-beam. When I darken this scene to expose the lights properly, everything else goes from dusk to midnight. Works great, and I get to send everyone home before happy hour."

"Well, thanks for letting me watch, CB. I learned a lot today," I said.

"No problem. Just don’t forget to mention the movie!" CB said, wagging his finger at me. Then he and his crew roared off into the fading twilight, another day of night shooting safely in the can.

"If you really look carefully at natural light, you realize how complex it is, and how it's constantly shifting. When you put up an...