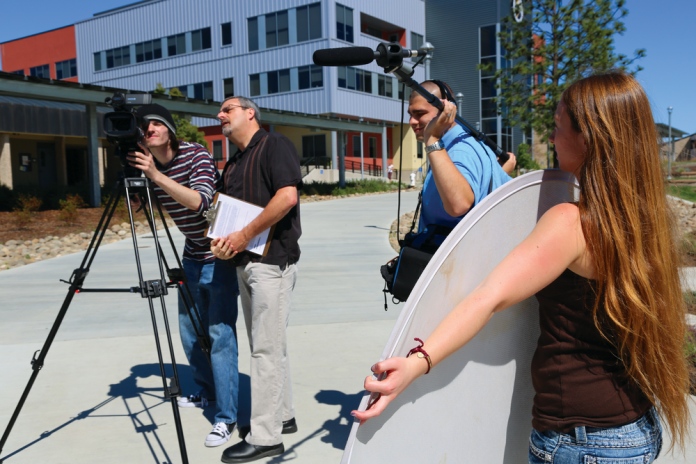 You have been working at a job for more than a few years now. This is your career and you work hard but get no satisfaction from it. You finally realize this is not what you want to do and you know what would make you happy. Does this sound like you? Or are you the person just out of high school who has no idea what to do or which way to turn?
If either of these scenarios describe you, then film school may be just what you’re looking for. Becoming a film crew professional can be very rewarding and you don’t have to live in New York or Los Angeles to achieve your goal. There are many film production schools that can teach you about the film crew roles you might hope to pursue.
In this article we will discuss what you can learn in film school and what a film crew pro does. We’ll talk about what you can expect to spend and what you can gain. And we’ll talk a little about some alternatives to film school. There is much to learn … class is in session!

There are many skills to learn that are very specific to a film crew member. If you choose to go to film school you will learn the “time mastered techniques” of production.
Here are a few positions you can learn to master:
There are many more positions available in the world of video and film production. Associate Producer, Production Manager, Director of Photography, Editor, Best Boy and Grip to name a few. Each and every position plays a pivotal role in the overall production. Next time you go to the movies don’t jump up after the fade to black/stationary title slide and head for the door. Stay seated and take a closer look at the credits to see just how many people it takes to make that blockbuster movie.
Did you notice that I said “video and film” production? Many films you can see at the theater today are actually shot digitally and then converted to film. Some never even get converted to celluloid and are projected digitally.
You might ask yourself, “Why should I go to film school?” The answer might surprise you. Here are five really good reasons film school can be beneficial:
Writer and director Pete Shaner is an instructor at the UCLA Extension film school. To learn what he got from film school, take a look at this Videomaker article.

The School of Hard Knocks

The film industry is hard to break into. And yes, “the school of hard knocks” can provide insight and learning, but it may take a lifetime to succeed. Film school can give you the knowledge and training that will make you a valuable asset to a producer in less than a lifetime. Usually from two to four years.
We all know that saying “it’s not what you know, it’s who you know.” While there is some truth to that, you still have to know something if you actually get the job. You can’t rely on family or your connections to get the job done.
Film production schools will provide things that experience just can’t. You can’t learn film theory on the job. You can’t learn how to edit on the job either. When you sit down with industry professionals during a production, there is a certain level of expertise that has to be immediately demonstrated, or you may be terminated.
How are you going to learn the business of filmmaking without learning the business of filmmaking? Keep in mind when you get into the business world, a degree can take you a long way. And you may get respect because you have that sheepskin on the wall. But going to film school doesn’t guarantee you will be a good filmmaker. Passion is one thing and skill is another. If you go to school you can combine passion, skill, and an education for a triple winning combination.

Getting to Know You

You may also get the opportunity to bump elbows with industry professionals in film school that you wouldn’t get on your own. Or it may take many more years to find yourself in the same position. There are many industry professionals that are still associated with the colleges and universities they attended before they became famous. Some even teach classes.
There are some other things you can do in your own film studio to improve your understanding of the film industry and film. Watch the work of other filmmakers with a critical eye. Watch your favorite movie again and write down why it’s your favorite. Then watch it a third or fourth time, see anything different?
It is very important to take a critical look at other filmmakers. What gear do they use? How do they direct their talent? What are their techniques? Can you accomplish that? If you want to do it for a living you have to know what it is you’re trying to accomplish. Watch the behind the scenes footage found on many DVD and Blu-ray extras. You have to be your own best critic. Everything you do will not be perfect. But it can come close with practice.

Higher educations seems to be getting more and more expensive every day. So attending now rather than later can save money in the long run. Taking a look at “The Hollywood Reporter’s The 25 Best Film Schools Rankings,” we see a top film school like Wesleyan University in Connecticut can cost over $55,000 per year with room and board. If you live in Austin you can attend University of Texas at Austin at the resident rate of about $5,000 per semester. Non-residents pay more than $16,000 per year.
Interestingly enough, the highest ranked school is not the most expensive. And the last ranked school isn’t the cheapest either. What this means is that if you don’t have a lot of money, you can still go to a good film school. You don’t have to attend cinematography schools in New York and California to find a good film production school. There are good schools all around the world.
A common thread is that out of state tuition is significant. On the low end of the expense scale is your local community college. You have to start somewhere. You can always get your associate degree and then transfer to a four-year school later.
There is always more than one way to lighten the financial burden. There are grants, scholarships and awards to be had by many. To begin you have to apply, stop thinking about it and just do it. You will never know until you try. And for a chosen few, tuition at a state college or university can be paid through military service. Check here for more information about covered tuition. The National Guard in particular, allows soldiers to continue working civilian jobs while serving.

Attending film school allows you to to use all that filmmaking equipment that you can’t afford to buy on your own.

In film school you will have the opportunity to learn about every type of position. This will help you figure out what you’re interested in. It will also make you a better all-around producer. By knowing what you don’t want to do allows you to focus on what makes you excited about being in school.
When you find out what really interests you, then you can tailor your educational experience. By focusing on your favorite aspects, you can become an industry professional in your field. But with a fully rounded background in everything else.
Where else in life will you be allowed to make mistakes except in college? You can add it all up to the learning experience. And at the end of the day no one gets fired. This may be your only opportunity to make mistakes in a safe environment. Once you get out there in the real world your livelihood depends on you getting it right.

If you can’t afford to go to film school, or it’s not about the money, there are other ways to be a part of the film and video industry. You can work at a local community access cable station. There may be paid positions available or non-paid positions in the volunteer department of your local station. Videomaker’s Forum is great at connecting people with like-minded interests. This forum post offers some “straight dope” on the film school experience.
You might consider a local film and video club, this forums link http://www.videomaker.com/community/forums/topic/high-school-film-club was started by a student looking for advice on starting a film club – you can go that route, too. There may be one already up and running in your community. College isn’t for everyone but there are alternatives. The Videomaker website is a great way to learn more. If you want to know more about "Pre-Production" you can go to:www.videomaker.com/how-to/pre-production. To learn more about writing just enter the word “writing” in the keyword search box. You can explore all kinds of topics like directing, cameras, or business. It’s a great way to see what else is out there in the world of film and video.
There may be opportunities locally at companies, stations, and production houses to do an internship. More than likely it will be unpaid, but the benefit is that you get experience and a chance to meet industry professionals. Similar to an internship, you can get hired as a “will-work-for-training” grip with a local company or video producer. They are always in need of an extra pair of hands. And the trade-off is the free education and training. There’s always a network of people out there waiting to hear your story. It pays to meet people, make friends, and socialize. Many a position has been filled by networking. A simple referral from a friend or acquaintance may be all it takes to get you hired.

You now have a better idea of what a film crew professional does. You know what you can do to learn more about it. And when the time comes for you to decide about school, you will be able to make an educated choice. After you examine all of your potential choices you’re sure to make the right decision. No matter which of the cinematography schools you choose you will come out an enlightened individual. You will be smarter than when you went in and on your way to becoming a successful film crew pro. Who knows, you may be the next Steven Spielberg!
George F. Young is an Audio/Video Producer who works for a government agency in the Washington D.C. area.