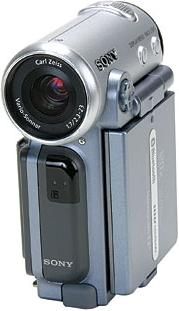 Digital camcorders have been small from day one, especially when compared to their analog peers. And incremental decreases in size seemed to have reached a lower limit. The new Sony DCR-IP7BT breaks through this size barrier, with a camcorder that can disappear into a large hand. The trick is that it is not a DV camcorder, but is instead a completely new format.

With tapes that are significantly smaller than Mini DV tape (30 percent smaller in terms of volume), MICRO MV is a whole new tape format. The digital video data that it records is not "DV." An MPEG-2 compression scheme, which allows higher compressed video than DV, defines the MICRO MV format. We are skeptical of Sony’s claim that MICRO MV MPEG-2 compression is equal in quality to DV, but are ready to be pleasantly surprised. Unfortunately, the preview unit we received from Sony did not come with any MICRO MV tapes. We are, therefore, unable to comment on the image this camera produces. We can speculate that it is probably quite nice, considering Sony did not compromise when it used a 680,000-pixel CCD.


We also did not receive the special output cables necessary to send a video signal either to a television monitor or out to a computer. The analog out cable apparently has both RCA (composite) video out and S-video out, in addition to stereo RCA plugs. The specs suggest that the analog port is bi-directional, allowing the camcorder to record an analog signal as well. The MICRO MV port on the unit is a standard four-pin IEEE 1394 (i.LINK) port. While the port allows the camera to communicate via the IEEE 1394 digital protocol, the data sent over the connection is not DV data. DV capture drivers, software and DV camcorders will not communicate with the IP7BT. Instead, the camcorder uses an IEEE 1394 card to receive and send MICRO MV data, but only with Sony MICRO MV-compatible drivers and software, which at this point is limited to the included Sony MovieShaker software.

In addition to the normal Camera/VCR modes, the IP7BT also has a still image mode (Memory Stick) that allows you to grab 640×480 stills. More interesting, however, is the Network mode, which will give users access to a Bluetooth network, apparently allowing you to use the camcorder for simple Web browsing and e-mail. We’re not quite as enthusiastic as the Bluetooth marketing folks about our friends sending us Max Headroom-quality video to our cell phones or e-mails, but we must admit that it is an interesting technology. The future potential to effortlessly connect a myriad of devices, from PDAs and cell phones to computers and cameras, via a widespread wireless network is exciting.

Small size is the name of the game, so it isn’t really fair to criticize this camera as a serious editing tool, but we don’t feel that editing compressed MPEG-2 video on a computer is the best use of this product. As a breakthrough device that is a marvel of miniaturization without compromising the extensive feature set we’ve come to expect in modern camcorders, the IP7BT will undoubtedly be a huge success. Buying one of these camcorders could make you an early adopter of the "next big thing."