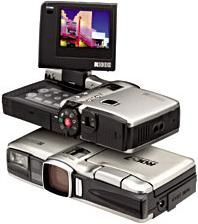 
Remember 110 cameras? They were Kodak’s answer to the very popular German and Japanese 16mm mini-cameras of the ’60s. At first glance, Ricoh’s new RDC-7 may resemble those fun old cameras, but upon closer examination, it is apparent that this is far more than simply a flip-flash still camera.

While almost anyone would find this camera both useful and interesting, its price suggests that it is intended for the serious consumer or prosumer market. From our perspective, buyers won’t acquire it as their primary video device, but it could be a great addition to your digital imaging toolkit, regardless of your current project’s scope.

Versatile Performer
More than just a digital still camera, this nifty unit also scans documents and records audio, but its most notable feature, for videographers, is its ability to record video clips onto a Smart Media card. So, if you wanted to load a video clip to your Web site or e-mail it to a friend, you could use the RDC-7 to shoot the scene, connect it to your computer, and copy your video to your hard drive.

The RDC-7 comes with USB, RS-232 and A/V cables for connecting to your computer or your television, allowing you to view what you’ve shot. It also comes with software and drivers to allow you to access and use the media you capture, as well as a Microsoft Explorer shell extension, which allows you to copy files to and from the RDC-7 as if it were another drive on your system.

Installing the drivers on our Celeron 400MHz PC, which had 128MB RAM, a 10GB hard drive and Windows 2000 Professional operating system, was a three-step process. First, we loaded the RDC-7 TWAIN driver onto our computer, which allows applications to acquire images from the camera. Next, we installed the USB driver, which added our test computer’s USB port to the list of serial ports that were able to communicate with the RDC-7. Finally, we installed the shell extension.

The RDC-7 has 8MB of RAM built-in, and a Smart Media card slot that allows you to keep shooting by simply swapping Smart Media cards. Using 64MB Smart Media cards, you could capture approximately five minutes of video at 320×240 and 30fps (frames per second) on each card; this may not seem like much, but for a digital still camera, it is quite impressive. Full screen (640×480) images can be captured in rapid succession by not as fast as 15fps.

We tried out our RDC-7 by shooting a few stills, to familiarize ourselves with the shooting controls and to analyze its image quality. We shot some indoor, existing-light shots, some outdoor daylight shots and some flash-lit shots. Overall, the camera produced high-quality images, with good color balance and generally balanced exposures.

We could verify general image quality immediately upon capturing each image, and make improvements, by adjusting the flash output level, or using the exposure value (EV) adjustment or color balance.

The Ricoh RDC-7 has other exciting features, such as document scanning, audio recording, etc. In fact, this device is more like a digital media Swiss army knife than a camera. It’s bristling with features and fits in your pocket; the only thing it doesn’t have is tweezers or a screwdriver.

As a video acquisition device, it has some limitations, but it may easily meet your needs. Its small size and versatility make it a great addition to your bag of tricks.