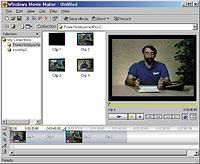 You know an application has come a long way when Microsoft bundles it with Windows. With the September 14 release of Windows Millenium (dubbed Windows ME), Microsoft brought video editing to the PC-using masses with the advent of Windows Movie Maker. Windows Movie Maker offers a straightforward interface that allows the user to drag clips onto a timeline to assemble a movie from raw footage. When you’re done, you can save your movie in Microsoft’s Active Streaming Format (.asf), at bit rates ranging from 28.8Kbps to 3Mbps.