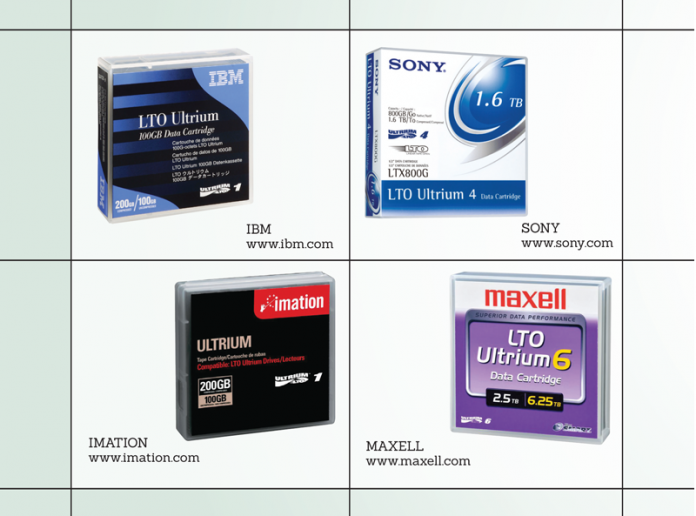 There’s no arguing against the fact that digital technologies have changed the landscape of shooting video. The absence of tape has led to being able to manipulate the video directly through computer software means. But the changing of the guard from analogue to digital has not changed the need for storage of what has been shot; what was once box loads of tape have been replaced by multiples of hard drives. Add to that the advent of higher resolutions, which necessitate the need for even more storage for what has been shot. The result is an ever-increasing cost for storage and the need for a solution that is as efficient as using a hard drive but more cost-effective. So with hard drives becoming more expensive to purchase due to having to buy more and more of them, not to mention maintaining them against hazards, the choice of going instead with digital tape, or LTO (linear tape open), is now surfacing as a means for archiving video for storage, be it short or long-term.

LTO was developed as a non-proprietary open standard in the late 1990s as an alternative to those proprietary formats prevailing at the time. Magnetic tape has been used for storage/backup for more than 50 years, with various companies introducing their own proprietary products and maintaining a tight grip on the market over the years. LTO broke that open and was embraced by those medium/small businesses, as well as others who were looking for storage means. The standard form-factor is a magnetic cartridge, which can hold 2.5TB of data. The 15-30 year life cycle of the LTO cartridge ensures a safe storage that is many years past that of a hard drive’s useful life-cycle.

The LTO data cartridge, called Ultrium, consists of a ½-inch magnetic tape spooled around a single reel. The design was fabricated for ease of use by those robotic tape library vendors looking to convert the widely used DLT-formatted cartridges (developed by IBM and DEC in the mid 80s). The durability of the tape is such that it’s expected to be able to handle around 5000 cartridge load/unloads, with about 260 full file passes (a full pass means filling the entire tape with data). Licensed manufacturers of LTO technology medium are EMTEC, Imation, FujiFilm, Maxell, TDK and Sony. Each cartridge comes equipped with a memory chip, whose memory is used to identify tapes; this enables drives to “understand” different generations of the technology and to store tape-use information. Specifications to the LTO standard describe a Data Compression method (also called Streaming Lossless Data Compression), with a newer feature adding data encryption which is done prior to the data being written to tape.

LTO (linear tape open), is now surfacing as a means for archiving video for storage.

The LTO drive’s tape head assembly straddles two adjacent servo bands, with two servo read heads and eight or 16 read/write heads. The head assembly moves so as to access the entire four wide data bands sandwiched between five narrow servo bands that is the Ultrium tape. The drive reads data from the cartridge in its own generation and at least the two prior ones, and writes data to its own generation and to a cartridge from the immediate prior generation in the prior generation format. The average rewind time for a typical drive is about 80 seconds, with about 50 seconds for the drive to access data from the beginning of the tape. To help keep the cartridges’ contents clean, an internal tape head cleaning brush is activated whenever a cartridge is inserted.

Error detection and correction is a strong point in favor of LTO, as data written to tape is verified by reading it back using the read heads that are positioned just “behind” the write heads; this enables the drive to write a second copy of any data that fails to verify on its own. Also a strong error correction algorithm is used that makes data recovery possible. The LTO cartridge has no moving parts and so is more durable than a hard drive, uses no electricity itself and, as has been noted earlier, has a superior storage life as compared to that of the standard hard drive of today. Additionally, the “speed” of the current generation LTO drives are on par with those of hard drives.

However, LTO technology by its very nature is susceptible to strong magnetic fields: for example, a pass-by of a bulk eraser will render the cartridge unusable. The tape also needs to be kept within a “normal” temperature range (i.e., that which is comfortable to a human). Also, traditionally, the linear run of the tape (think: tape recorder or cassette player) voids the ability for random-access — the locating of a specific area — quickly. However, using the recently developed Linear Tape File System, or LTFS, it is now possible to access files in the same way you would using a more typical hard drive or flash drive.

Initially, the cost of a hard drive versus LTO favored the drive: For example an LTO drive able to read a tape of up to 1.5TB was around $1300 in 2013, which was many times the cost of a 1.5 TB hard drive at the time. This price continues to be favored, although the cartridges themselves have become less expensive than they were in 2013 (approximately $25 as of late 2014).

But while the cost of the LTO drive is many times greater than that of a single hard drive, it’s when dealing with many hundreds of terabytes of video recorded data that the value of LTO over hard drives is seen. Here’s a simple example: You have 150TB of data to store. That would require 100 1.5TB external hard drives, at a cost of around $75 each, or $7,500. The same amount of data stored using LTO would incur one drive at about $1,300 and then 100 cartridges at about $25 each, or $2,500, bringing the grand total to $3,800. That would be a savings of about $3,700. And due to the nature of the cartridge-based system, the more data (i.e., video) being stored, the higher the savings that would continue to accumulate.

LTO is in heavy rotation for data archiving and storage due to the inherent strengths and low cost. It is also being used by those producing video productions, as the cost allows for just about anyone to create a competent backup and archiving system for their video. Improvements to the technology have included LTFS — also known as “Tape NAS” which is a hybrid combining the best features of LTO with that of the direct access search capabilities of hard drives. A recent development from Sony is the creation of a magnetic tape technology utilizing a magnetic coating measured in tens of nanometers. The recording capacity thus attained is seen as being approximately 74X that of the current magnetic tape storage media, resulting in a storage capacity of over 185TB per data cartridge. While no date has been set for a commercially available product, the appearance of such a product is seen as furthering the use of tape storage, even as it cuts down on the number of cartridges needed for any particular use.

Video productions require backups and storage as a matter of course. The use of LTO as an archiving medium for video — over that of hard drives or network drives — can only increase over time, especially as more video producers become aware of the cost-effectiveness combined with safety and security offered by this local storage technology.

Each technological upswing has seen the introduction of a new system for storing data. But long-term storage is as much dependent upon a regimented duplication process as it is upon the technology itself. So while an optical disc may be a more durable storage medium than that of tape storage (due to a lack of actual physical manipulation and immunity to magnetic fields), it is just as susceptible to failure over time, based on its life-expectancy. Therefore, if one assumes that a disc will begin failing after five years, doing a system-wide duplication of all discs again once hitting the three-year mark avoids having to go to an entirely new technology. This is true of any technology used for tape storage, providing that the technology itself isn’t seen as being out of date to the point where getting replacement devices (or parts) becomes impossible. It is therefore incumbent on those doing the backup/duplication to have a system in place that will take these time-limits into consideration, so that another copy(s) can be made within the safety margin.

Marshal M. Rosenthal is a technology and consumer electronics freelance writer located on the West Coast.