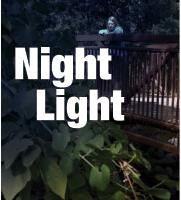 View the tutorial video for Night Light: How to turn the light of day into the dark of night using Day for Night shooting.

How to turn the light of day into the dark of night.

The technique of shooting outdoor night scenes in broad daylight has been around since the early days of film. It is commonly called Day for Night (DFN), and you can spot it in films like It’s a Wonderful Life, Planet of the Apes and Jaws; documentaries like The Creation of the Universe; and, of course, the French film, Day for Night. At times, the effect is obvious; at others, it is not.

But today’s camcorders are able to shoot in very low light. Those with infrared capabilities can even make some subjects visible in pitch black. So why would you want to fake it by shooting in the day to simulate the look of night?

First, even though your camcorder can shoot in low light, the noise will probably make this far from your first choice. So, not having to haul around lots of specialized and heavy lighting instruments that will suck power from the neighboring county is a huge benefit. Plus, giving a scene enough light to shoot, while retaining the look of night, is a real challenge. Second, you don’t have to deal with a fussy crew that probably didn’t sleep much that day and is going to be knocking stuff over, forgetting lines or even dozing as soon as the caffeine wears off. Next, you can actually see what you are doing. Ever have to search for a roll of black gaffer tape outside at 11:00 p.m.? Finally, it’s cheaper. Heck, what you’d spend in lattes alone to keep even a small crew alert will make learning this skill worth your time.

…isn’t what you get, so here’s a short science lesson. The color temperature of the light coming from the moon and the negligible contribution from starlight are close to that of normal daylight – yes, really. It just looks blue because of the way our eyes work. Remember those rods and cones? During the day, when there is plenty of light, the cones process color information to give us what we have come to recognize as normal color temperature. But when light levels dim, the cones lose their sensitivity to all but the blue wavelengths. The rods are very sensitive to low light levels, but not to color. That’s why it merely appears as though nighttime has that cool hue of blue.

Since we are trying to simulate what the eyes naturally see, we need to remove most of the overall color information, reduce the brightness and add a touch of blue to all of our Day for Night scenes – but how much? Too much and it will look fake. Too little and it will just be underexposed black and white. What we are going for is a tint, a subtle amount of blue that merely suggests its presence. The amount of blue should give the viewer a sense of what’s going on in the scene. A subtle tint will suggest moonlight. A more liberal amount of blue will imply a colder nighttime scenario. Throw in gobs of blue, and you have a B-movie or worse.

Even though the sun will now be your “moon,” you shoot much as you would normally. Day for Night scenes shot just before sunrise and after sunset or on an overcast day will give you a lower contrast range that you can increase during editing. Since you won’t have discernible shadows, the end effect will be more subtle and possibly more believable, but you can also shoot anytime during the day. We’ve all been outside on a bright moonlit night where we can see distinct moon shadows. Just like during a normal daytime shoot, you can create simple two-point lighting by putting the sun high and behind your subject and filling with a large reflector.

You can create the Day for Night effect either in the camcorder, during editing or by a combination of both. If you want to use your camcorder, simply white-balance on something that is yellow or amber, rather than white. Handy items like a manila envelope, a yellow folder or even colored lighting gels held over a white card will give you varying degrees of blue, increasingly so the more off-white your white-balance target. If your selection of off-white targets is limited, you can alternatively dial in just the amount you are looking for, as long as your camcorder has menu options that allow you to adjust color settings. Look for settings called something akin to White Paint, Color Matrix, Color Gain or Rotation.

If you are pulling off the entire effect in your camcorder, you’ll also need to underexpose a stop or two. But don’t get carried away with this. If you make things too dark, you will lose details in your blacks that would otherwise be visible if you had waited to adjust exposure during the editing session.

Editing in the Dark

You will get more flexibility and potentially better results by producing the Day for Night effect during your edit session. Just as in the camcorder, you will want to reduce the overall saturation and brightness and colorize with a believable amount of blue. If you have access to three-way color correction and exposure adjustment curves, you’ll have a powerful set of tools to help you dial in just the right amount of this effect (for details, see our tutorial comparing the in-camcorder vs. post-processing Day for Night effect). Depending on your software and experience, you can call it quits here and have a reasonably good Day for Night shot. If, however, you want to make your shot even more believable, compositing software will be very useful.

When you shoot at night there are things like lamps, flashlights and other “practical” sources to provide the actual illumination or at least suggest the direction, intensity and color of the light you have falling on your subject. These light sources get washed out when you are shooting during the day, so you’ll need to add them back, using software like Adobe’s After Effects. Here you can insert static or even animate moving light sources like car headlights that otherwise would never show up during the day.

By using your camcorder’s custom white balance, your editing software’s subtle color and exposure adjustments and compositing in nighttime light sources, you’ll get all the mystery and drama of a night scene without having to pay for even one non-fat double-shot no-whip mocha.

Keep the sky out of your shots as much as possible, particularly if you are producing the Day for Night effect in-camera. The sky is darker than the ground at night and brighter during the day. So if your shot includes sky, it’ll be a dead giveaway unless you take steps to darken the sky. For instance, if you were shooting sky against a horizon that your subject will not cross, you could use a strong graduated neutral-density filter to bring the sky’s brightness down to at least equal to or preferably less than the ground in your shot.

Oh yes, to really sell the technique, don’t forget to add a quick cutaway (or two) with a shot of the real moon.

View the tutorial video for Night Light: How to turn the light of day into the dark of night.