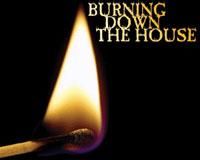 To view the tutorial video for Burning Down The House, click here

In today’s films, it seems everywhere you look you see Visual FX. Visual FX are powerful tools when used correctly, but they are often frowned upon when they’re used for the wrong reasons.

I like to use Visual FX to enhance the story I am trying to tell. If they have a purpose, make the shot look better and help tell a story, why not use them, right? The problem is that many people don’t know where to start. A few years ago, I was one of those people. However, by learning some Visual FX, I am now gearing up for my next film – a story I’ve been wanting to tell, but previously could not because I did not have the budget or knowledge of Visual FX. By learning a few Visual FX, I can now tell this story while keeping my budget extremely low. Therein lies the beauty of Visual FX: helping you tell your exciting story while keeping your budget low.

My story is an apocalyptic one, but I’m sure you can find a way to apply this effect to your projects. In this demo, we’ll be setting a house on fire.

For the following tutorial, I will be using Adobe After Effects, but the methodology carries across to other apps like Discreet Combustion, Shake or Sony Vegas.

Let’s face it. Many people become interested in Visual FX because they’re borderline pyros. I am not an exception to this statement. I love carnage and chaos (fictional, of course), so let’s get started.

First, you need stock footage of fire and/or explosions. Before you go out and spend $600 on one stock footage explosion, do some research! You may be able to film it yourself (I don’t recommend it) or find cheap stock footage on the internet. I personally use www.DetonationFilms.com for my stock fire and explosions. They’re insanely cheap but great quality! Once you have a library of fire/explosion footage, you can move on to the fun stuff. 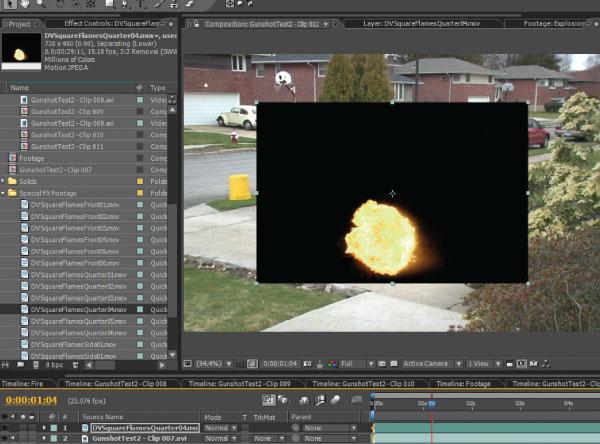 Most fire footage is filmed over a black background. To remove this black background, you could use a Luma Key (Effect>Keying>Luma Key) and key out (remove) the darker areas, but there is a much easier solution: change the transfer mode of the fire footage to either Add or Screen. This essentially removes the black background and gives the fire a little bit of a glow. Add will give you more of a glow than Screen. 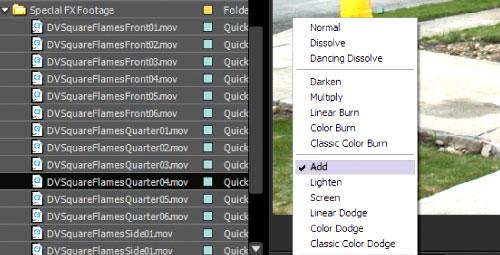 Next you want to scale down the layer to fit inside the house’s window. Click on the layer in the timeline, and press S for scale. The scale properties will come up. Click on the layer in the Composition window. A bounding box should appear that shows you the borders of the footage. Grab any side, and scale down the footage of the fire to fit inside your window. If you hold the Shift button while you scale, it will uniformly scale your image, preserving the aspect ratio.

If the fire is too transparent, you can duplicate the footage (CTRL+D), and set the lower layer’s transfer mode to Lighten. Be careful, though, as this may overexpose your fire footage. If this is the case, apply an Exposure filter (Effect>Color Correction>Exposure) to your top fire footage layer, and bring the exposure setting down to match your footage. Of course, you can cycle through the transfer modes and see what looks best for your footage.

For the finishing touches, depending on the type of footage you have, you may want to add a little grain (Effect>Noise and Grain>Noise) or blur (Effect>Blur and Sharpen>Gaussian Blur) to match your live-action footage of the house. Here, I added a very small amount of Grain and set the Gaussian Blur level for both fire layers to 2.0. A plug-in that completely eliminates the flame transparency issues when using a transfer mode is the Walker FX package (www.digieffects.com/products/walkerFX). It creates an alpha channel from the black background, thus resolving the transparency issue.

Below is a picture of the results. Notice the transparency issue is resolved. You no longer need to add multiple layers of fire footage to fill in the transparent areas. At $149, it’s a great deal! Thanks, Digieffects!

Your fire footage should blend pretty well with your background footage. Of course, there are no universal settings for these effects, due to different exposure settings, cameras, lighting conditions, etc., so experiment and find out what works best for your footage. Experimentation is key. Use this as a foundation for your own little tricks and techniques. Experiment, experiment, experiment! You’ll be surprised at what you come up with. Be sure to check the online tutorial, and… oh.. the light saber FX? That’s in an upcoming demo! 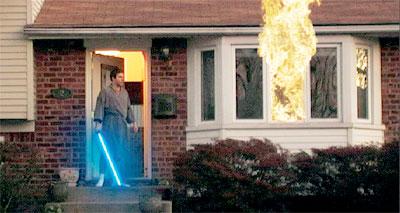 To view the tutorial video for Burning Down The House, click here