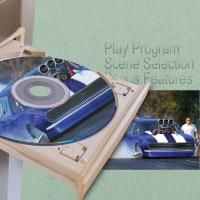 Some simpler DVD authoring programs have auto-everything, and all you have to do is “click…click…click” to make a finished project. But there’s a real beauty in DVD motion menu making, and this month’s tutorial is all about how you can take control of your program and make your DVD menus come to life.

The goal of this tutorial is to demonstrate some basic tools in developing a DVD motion menu from scratch. In our example, the motion menu will play back for 30 seconds, and the specifications will be NTSC format, using a 4:3 aspect ratio. For this tutorial, we will be creating a typical “main menu” from a feature-length movie project. The menu itself will display a 30-second clip from our movie, as well as three buttons for navigation. The three buttons will be Play Program, Scene Selection and Bonus Features.

Step One: Menu Setup in Photoshop

The first step in this tutorial is to create a Photoshop document in which we will design our basic menu layout, including navigation buttons, background and movie clip. Using Adobe Photoshop, select New under the File pull-down menu, or you can also use the software shortcut Command-N (Mac) or Ctrl-N (PC). Depending on the version of Photoshop you are running, you will be able to choose the Preset titled “NTSC D1 Square Pix, 720×540 (with guides)” from the Preset pull-down on the new dialog box that has opened. If you do not have this preset, use the following settings to create a custom new document setup:

Recent versions of Photoshop will allow you to create this initial PSD document “with guides,” as mentioned above. These guides display the Title and Action Safety areas within the menu. The Title Safety area is roughly everything displayed within a 10% outer margin of the menu area. This outer 10% may display close to the edge of some television monitor screens, but displays completely on computer monitors and most flatscreen TVs (Plasma, LCD, etc). When you are creating DVD menus, all interactive buttons should display within this 10% Title safety area to display properly during playback.

Once the new document is created, set the Foreground and Background colors in Photoshop to two complementary colors. For this tutorial, we set the foreground to dark green #336666 and the background color to black #000000. To set a basic background design, select the Background Layer and choose the dropdown Filter > Render > Fibers filter, which will create a simple striated green/black background. As an alternate choice, use a similar rendered effect (such as clouds) or perhaps a muted still photo for a background.

To create a layer for the navigation buttons, add a new layer to the Photoshop document. Name this layer Buttons. Using the Text tool, add three lines of text to the new Buttons layer as follows:

We will use Adobe AfterEffects version 5.5 for this tutorial. When you launch AfterEffects, you will create a new project. Select New Composition from the Composition pull-down menu. Set the following parameters:

Note: Using the NTSC D1 Square Pixels preset will likely auto-fill most of these parameters. 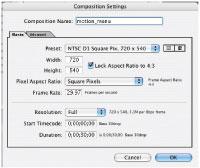 Choose Import > File under the File pull-down (Command I on MAC or Ctrl-I on PC). Locate and select the Menu Photoshop document that you created previously. When importing a Photoshop document (PSD), After Effects provides the choice of importing all Photoshop layers as one layer (Merged) or importing each layer individually. Importing individual layers is useful when you are creating more complex menu animation builds, but for this tutorial choose Merged Layers for the import. The Project window will list the composition Motion_Menu, as well as the file Menu.psd.

The motion clip used in this tutorial is a 30-second NTSC 720×480 DV clip that will display at half size in our motion menu. To import the motion clip, choose Import> File under the File pull-down, and locate and select the video file that you will use in the window. As well as displaying throughout the timeline, the clip will display in the Project window along with the composition Motion_Menu and the file Menu.psd.

Drag the Menu.psd file from the asset list into the timeline. Make sure to drag and drop the Menu.psd asset in the timeline column under Source Name, so the asset will start at zero frames. The merged flat menu design will display in the Composition window. Next, follow the same procedure to add the Clip.mov movie clip as a new layer to the timeline. Make sure you add the clip above the Menu.psd layer, so the clip will display. The Clip.mov will display in the timeline from 0;00;00;00 to 00;00;30;00 -meaning the length is 30 seconds. (Note: Semi colons refers to drop-frame, colons refer to non-drop, which is usually a pro level format.)

The Clip.mov will display at full resolution of 720×480, which obviously obscures the navigation buttons on the layer below. The motion clip should be half size and display above the three navigation buttons. With the Clip layer selected in the timeline, choose Layer > Timeline > Scale. Change to width and height to 50 percent, using the following settings:

Use the computer mouse to drag the resized clip to display above the navigation buttons in the top-center half of the menu.

The layered After Effects composition is ready to output. Choose the pull-down Composition > Add to Render Queue. This selection will display the Render Queue window, featuring four sections under the Render Details: Render Settings, Output Module, Log and Output To. Render Settings should display a hyperlink of Current Settings. Select this link, which will open a dialog box. Specify the following parameters, using the dropdown menus (change only applicable settings specified) and select the OK button when finished:

Once you have specified the Render Settings, choose the Output Module hyperlink, which will open another dialog box. This stage of our tutorial is perhaps the most important. Our original PSD and After Effects files have been set up using 720×540 square pixel resolution. Our goal during the output phase of After Effects is to generate a DV file that we will compress, using a third-party encoder (such as Apple Compressor or CinemaCraft SP). When delivered from a DVD, the menu must be 720×480 to compensate for the horizontal pixel playback of NTSC monitors. During this phase of output from After Effects, the 720×540 composition will be “stretched” to 720×480 for encoding. Please note that recent versions of After Effects often include MPEG-2 as an output codec, but it is preferred that the encoding of any menu file be completed from a rendered QuickTime standalone file.

With the Output Module dialog box open, make sure to set the Format dropdown to QuickTime Movie. Ensure the Video Output check box is checked, and select the Format Options button. Set the following parameters within the dialog box that appears and choose OK when you are finished:

Select the Stretch checkbox, which should show the current rendering settings as 720×540. Select the Stretch To: dropdown menu, and change the selection from Custom to NTSC DV, 720×480. Make sure the Scaling Quality dropdown is set to High. 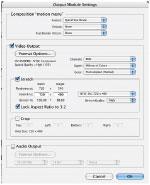 Returning to the Render Queue dialog, leave the Log: dropdown set to Errors Only. Use the Output To: hyperlink to set a destination for saving the QT. With all four settings specified in the Render Queue, select the Render button, which will begin the output of your motion menu.

Once the 30-second clip is rendered, you can review it by opening it with QuickTime Player software. You can then encode this final file as an export out of QuickTime, using QTPRO capabilities, or you can process the file using popularly-available MPEG-2 encoding software.

You can assemble audio files and add them to this motion menu in the authoring process, along with highlight indicators, interactivity and looping points.

Brian Brodeur is the founder of NewYorkDVD, an award-winning business in the music education and entertainment markets, including web-based/mobile video and hi-definition (HD-DVD/Blu-ray Disc) development.