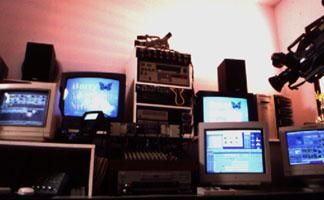 Barry Advertising Networks boasts a complete digital studio. All of the company’s video is shot on the Sony DXC-537 three-chip camera with a dockable Sony DSR1 DVPRO recorder, or a Sony DCR-VX 1000 digital camcorder. The video footage is input into one of their two Newtek Video Toaster Flyers or Grass Valley Group’s version of the Media 100 nonlinear editing system for editing. The company uses the Sony DSR-30 DVPRO digital player/recorder to transfer raw footage into both systems.

The company is equipped with patch panels to direct a video signal to a variety of places including Beta, ¾-inch U-matic and S-VHS decks. These patching capabilities allow several video formats to be transferred into one of the company’s three nonlinear editing systems. When using either of the Newtek Video Toaster Flyers, the video is routed through a Tektronix WFM90 Waveform Monitor for setting up the internal time base correctors (TBCs) and to reference their outputs to color bars. The first Toaster Flyer system, which uses an Amiga 4000 computer, uses a Digital Equipment Corporation RC 2000 remote control unit to externally adjust the time base corrector. Creative Video’s second Toaster Flyer is used to import flying graphics over an existing video source. The system contains three 9GB and three 4GB Seagate hard drives for a total of 39GBs of storage. The Toaster Flyer holds two-and-a-half hours of high quality compressed video. The Video Toaster produces fades, wipes and dissolves in real time.

The agency’s other nonlinear editor, the Media 100 System is driven by a Macintosh Power PC. Barry Advertising Network has configured the Media 100 to stretch across two Apple monitors. This System has an internal waveform monitor and 148MBs of memory. The maximum compression ratio is 2:1. The Media 100 System is equipped with Adobe Photoshop, Adobe After Effects and Boris Effects.

For video output and duplication, there are ten Panasonic AG-1290 VHS machines, a Sony SVO-9600 S-VHS recorder, a Sony UVW-1400 Beta deck along with a Sony VO-7600 ¾-inch recorder. All audio is produced in a separate suite in a Digidesign Session 8 integrated digital studio. The audio is patched through a Ross RSC 1402-14 cha