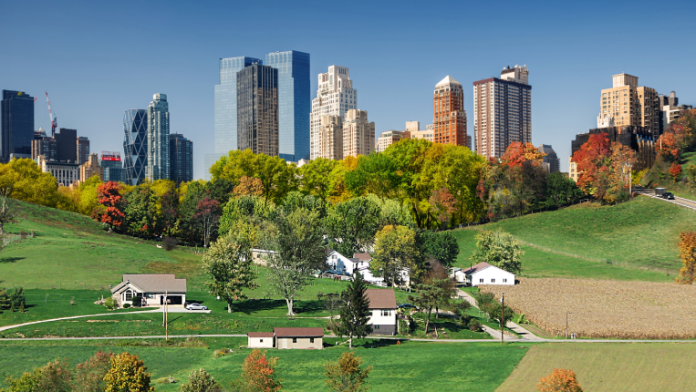 That is a very common starter for screenwriters and filmmakers with low budgets. Not necessarily because they want their story to take place inside of an apartment, but because when they put their producing cap on, it’s the most cost effective place to shoot. What if I told you that you can start your story off with EXT NEW YORK STREET – DAY without having loads of money? What if I also told you that Hollywood and major motion picture studios do the same thing? Let’s go over ways you can use stock footage, camera angles, depth of field, sound effects, props, actors and vfx to disguise a location.

We fly past the Empire State Building as it overlooks the busy streets of New York City.

Option A: rent a helicopter to fly through New York to pick up b-roll, or, the method I like, use stock footage! For some reason, this technique tends to be drastically overlooked. Stock footage is a great tool to use for establishing shots. When using stock footage, make sure you read the licensing and are paying for the right one. The prices may vary, but the production value gained from using it gets you your money back and some.

Study reference photos of the spot you’re recreating. Always be as authentic to the feeling as you can.

A flyover of the city makes the film seem big! Plus, movie-goers are accustomed to seeing those images, so that in itself puts you on par with some of your favorite films. When using this stock footage, also make sure you color grade the footage to match the style of the rest of the piece. You can also edit the footage with the same editing scheme (jump cuts, speed ramps, etc.) as the rest of you clips. This will tie it all in together.

A little set design goes a long way. Study reference photos of the spot you’re recreating. Always be as authentic to the feeling as you can. A pizza shop that says “New York” on the front or a parking sign that says “Yankee Stadium Parking” can also enhance the environment in your scene. We can also have signs pointing toward the subway with the appropriate New York labels.

Style and fashion trends vary depending on the time and place. This also helps cheat a location. A couple of years ago, I was on the set of a popular TV show that is suppose to take place in Miami, but the second unit was shooting in California. To cheat a street scene to look like South Beach, they threw in some Miami police cars and all the extras wore very bright and vibrant colors. It was obvious to see who was the “Miami” crowd and who was the LA film crew. This is not to say that everybody in Miami dresses that way, but the consensus is that different demographics have certain styles. For our New York scene, maybe we throw in some tourist with “I Love New York” shirts. Maybe we also throw in some smartly dressed business men and women on the way to their 9-5, as well as police officers with appropriate uniforms. A hot dog vender in a white shirt and red apron can help sell the scene as well. The beautiful thing about all of this is that wardrobe is generally very affordable — aka, cheap!

That business woman on our street just left work. Hey, lets put her on a cell phone and have her at the same time, hailing a cab! Let’s also, give that hot dog vender a hot dog stand with “New York Style Hot Dog” written on it. Give our tourist some cameras. A cool trick, if it is a period piece, is to use politician stickers. “Vote for Giuliani” campaign signs, or a newspaper that reads, “Yankees Win the Pennant!”

Our lead passes by a bar with the Yankee game on the TV. We hear the announcers calling the game. Depending on the time our story takes place, he mentions the appropriate players (ie. Jackson, Yogi Berra, or Jeter). The neat thing about this, is that not only does it help create the location, but it also solidifies the time in which our story takes place. Make sure you have the rights to this audio or to be safe, hire an actor to do the voice over. Also, don’t show footage on the screen if you do not have the proper rights. Generic stock footage of a crowd works, or you can just have the sound on a radio.

New York City is full of taxi cabs, so even though our shot may be a tight one in order to save on filling the streets with picture cars, we hear sounds of car horns and heavy traffic.

The dialect of our actors also play a huge role. Are they speaking with a New York accent? What if we’re instead portraying the American Southeast? How different would their accents and slang be? When doing this however, make sure it is authentic. It may be best to keep the actors voice normal if they can’t hit it exactly and keep the accents as the background noise or occasional characters, because fake accents tend to stand out. Be careful.

We established our environment with the stock footage. Now we can live in a more confined space. Longer lenses and tighter shots can help us achieve this effect since we can throw things out of focus. That’s what filmmaking is all about — recreating as realistic of an environment as possible while simultaneously cheating as much as you can! The props that are closer to the camera should be very detailed, but the props and set dressing farther away from the camera can have very little detail. On-set, these props look incredibly fake, but that doesn’t matter with careful framing. All the matters is how it looks to the camera. On a commercial I shot, we needed a bookcase to fill the background. The prop department provided a very large bookcase filled with what looked to be encyclopedias, but was completely fake. In fact, it was just a huge board that was carved and painted to look like books. Since it would be nearly completely out of focus, I knew it would work.

Our New York scene actors are on a busy street, but we don’t have to look down the long New York Street into infinity. Shooting directly down the street would mean we’d have to make sure it all looks like New York — extremely difficult. It also means that even if we were shooting in New York, we would have to block every block down for miles and miles, which is virtually impossible. The truth is, even your favorite Hollywood movies and TV shows don’t do this. One way to get around it is to angle our camera so that it’s shooting against a building as opposed to down the street.

When film companies come to my hometown Chicago, they usually shoot at this one intersection in the Financial District. It is the same intersection that is in “The Dark Knight” during the funeral procession scene. I have to believe they choose this location because it is a t-shaped intersection. So they shoot mainly against the huge financial building, meaning, they don’t have to block off miles and miles of real estate in the city.They also used this same block later in the movie for the Truck Flipping scene.

Which brings us to our next point. Don’t show too much off the jump. The more you show in the wide shots, the less you can cheat later. When you establish the geography in the wide shot — this store is on the right, the park is over here, the cars are over here — you are stuck. Only do this when the audience needs to know the geographical set-up. When you are cheating locations, only show the buildings for one part and make if feel like we are deep downtown. When you want to establish we are in Central Park, shoot the park across from the buildings. The audience only knows what you tell them.

Visual effects tend to scare a lot of people off, but honestly, when done correctly, it’s a huge money saver. I’m not talking about the big, grand, fantasy vfx. I’m talking about what we call invisible effects. The kind that the audience doesn’t even know is there. Quite often, a production company would film on a street with a green screen. They would grab b-roll or stock footage of a real street and use it to replace the green screen. In some scenes, the TV show “Ugly Betty” would shoot against a completely green screened set and replace it all with a city landscape.

Watch this CBS Digital VFX Breakdown that includes a scene from “Ugly Betty” and see how that show as well as others cheat locations. Warning, this is may ruin the illusion of television and movie magic.

Simple set extensions also work. Matte painting a skyline over a couple buildings to sell the shot can really help.

Color can always be used to tie everything together. Is it a humid sunny day? Does your story demand an industrial feel? Is it a super hero piece? Create a color palette that sets that mood and stick with it for the entire project.

You can shoot on the same location over and over for different productions or even for different scenes without people noticing by using color as well as the other tips I mentioned to make the action look like it’s taking place somewhere else. That’s why studios like Universal, Warner Brothers and Paramount have backlots. Productions use these lots over and over and over again. Although you may not be shooting on a lot, you can still use the same principles.

Check out these links to studio lots to get inspired.

Make sure you remove what could give your location away, newspapers, signs, etc. Mismatched footage can also interrupt the illusion you’re trying to create. Continuity both in the mise en scene and the look of the final product will be incredibly important in selling the scene. Also, make sure once again, to not show too much, only what you need to get the point and message across.

BRINGING IT ALL TOGETHER

Last but not least, don’t be afraid! Write your stories from your imagination, then figure out how to cheat and trick it to make it happen. Use all of these tips to create your “New York” location in your suburban neighborhood, or whatever location your heart desires!