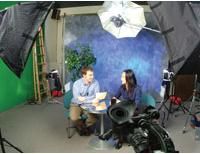 How to produce video productions with someone else’s gear and get them broadcast – for free!

It’s a federal mandate to local cable companies (the Federal Cable and Telecommunications Acts of 1984, 1992 and 1996, to be exact): depending on your city or county’s franchise agreement with your local cable company, there may be an entire video production organization at your disposal – everything from video gear, video editing computers, studio space and even a way to broadcast your finished masterpiece at no cost to you. All you have to do is provide the labor and brainpower.

Back in the 60s, as television cable service was expanding across the United States, cable companies were using the public right of ways such as sidewalks, power poles, alleys and the like to string transmission lines from house to house. Various politicians and community activists were searching for a way to charge these for-profit corporations for using the taxpayer-supported right of ways. Eventually, this “rent” culminated in the public access channels we see daily on our local cable systems, as a sort of exchange for the right to use the right of ways. Also, a small percentage of the franchise fee the cable companies pay goes to funding these channels. There are three kinds of public access channels; they carry the acronym PEG: Public, Educational and Governmental. Let’s start with educational and governmental before we get to the good stuff.

Educational channels service the needs of the local elementary, middle and high schools for announcements, broadcasts of graduation ceremonies, televised classes and other activities. Video production classes in local schools can take advantage of the broadcast capabilities of the educational channel to show off their latest video work or student-run broadcast.

The final piece of the PEG acronym (but the first letter!) is the public access channel. It is open to the general public, and cable systems must provide the equipment, training, studio space and broadcast channels necessary for local community members to express their voices. All types of programming – gardening shows, discussions of city politics and even cooking shows – have a place on the local public channel. For little to no fee, citizens with no video experience at all may sign up for training on camera operation, video editing and studio practices. They may reserve and use video cameras, mics, tripods, lights and other production gear for free. There may be a small fee to join the volunteer group.

One of the few rules is that those wishing to use the equipment should reside in the service area of the cable company. There is no requirement that the user subscribe to the cable system’s commercial programming.

If you’re unsure about your ability to produce a full-fledged video program, you’ll be happy to learn that most access providers are required to teach fledgling video producers how to operate all of the equipment in their facilities. Classes are held regularly to teach those with no experience the care and use of all the video gear in the facility, to ensure the greatest success possible.

For some valuable experience before taking the plunge into the “deep end” of a video production, volunteer on someone else’s project as a photographer, editor or a simple go-fer. Keep your eyes open and ask questions, and you’ll gain valuable experience while building a base of knowledge to make your idea into a broadcast a reality. Seek out more challenging opportunities from show to show, and keep pushing for improvement in your skills and abilities. You’ll also build valuable contacts and friends from these volunteer opportunities. Eventually, you’ll need the service of others, both experienced and not, to volunteer on your production – then you will be the experienced one!

No Gear? No Problem.

Just as it provides training, the facility will provide video production gear for use by its members. Quality ranges from decent home equipment to prosumer to high-quality broadcast gear. The good news is that they provide more than cameras for the ambitious producer. The sort of gear package available consists of a camera, tripod, mic and a simple light kit. Additional accessories for creative producers might include boom pole mics, greenscreens and wireless audio gear. Some larger operators even offer production trucks with an attending engineer for multicamera uses. And all of this is available for little to no cost!

While the gear is free, it’s still the responsibility of the member to care for the equipment. If it’s stolen, broken or otherwise rendered unserviceable, you’re on the hook for the repair or replacement of the video equipment. Some of the video packages can run into real money – in many cases, a whole video package may be valued at several thousands of dollars, so it’s important to take care and secure the gear as if you own it yourself.

You reserve studio space on a first-come, first-served basis. There may be one or a few generic sets (news-like, living room, etc.), and you can certainly build a custom set for any unique needs – at your expense, of course. Two or three cameras are usually present and are controlled and coordinated through a multicamera switcher and audio production board kept in another room. You may tape your programs for later broadcast or present them live.

Programming Choices and the 1st Amendment

The topic of your show is entirely up to you. The United States Supreme Court has determined that the cable access provider may not interfere or change your message. However, be aware that limited power exists for the provider to deny broadcast of your programming if it’s determined to contain pornography or slander.

You can produce a program on local politics, cooking, log cabins or any subject that strikes your fancy. More mainstream shows will attract a larger audience, while shows that tend to be more “out there” will appeal to a more, shall we say, selective audience. Length is usually in the 30- to 60-minute range, although some providers might have different requirements. The scheduled broadcast date is up to the public access provider. Although you may certainly request a certain date and time, the rules of the organization might determine a different time for your debut.

Once in the edit bay, it’s time to turn that stack of videotapes into a full-length production. Editing will be most exclusively computer-based, and you may have limited time to edit your masterpiece for broadcast, as others will most certainly be waiting in the hallway for their turn to edit their productions. Plan ahead and jot down notes before the edit session to ensure maximum efficiency and the highest-quality product possible.

Public access video channels serve an important purpose, because they provide an electronic soapbox for local folks to broadcast their unique points of view about the world, the nation and city around them. For those willing to do a little work and sacrifice a little time, the high price of video democracy is free, and it’s just around the corner. After all, it’s a federal mandate.

Randy Hansen is a television news chief photographer who volunteered for a public access channel while in high school.

Side Bar: Public Access Is More Than Just TV

Public access was initially begun as a way for local communities to have their voices heard through the medium of television, but public access providers have begun to seek out new avenues of communication to fulfill their commitments to allow minority voices of opinion and creativity to be heard.

Many operators now offer high-technology solutions beyond television. The internet provides worldwide access via web pages, blogs, vlogs, podcasts and cell-phone distribution to achieve and serve the idea of access for all. Some providers are updating their services to include these technologies.

As new technology emerges, innovative ways of communicating will allow the mainstream, the right and left and the fringes of opinion a more level playing field, when the access to these distribution channels is provided for all.
Check with your local provider to see if it has some or all of these technologies available for use. If not, ask it to look into offering these services to its members in addition to television production.