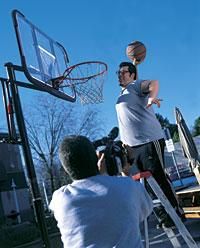 One of the interesting traits of the human brain is its natural inclination to create an association between two images juxtaposed together. With video, we can use this tendency to our advantage. For example, a picture of a child crying followed by a picture of a dog licking up an ice cone from the ground suggests that the child dropped the cone and the dog ate it. Of course, the dog may have been taped in Los Angeles and the child in Cleveland. And the dropping of the ice cream? Well, that took place only in the viewer’s head. With a little practice you can use this trick to add "cost free" action to your own video productions.

Here is an exercise in the power of suggestion. You can easily demonstrate the basic concept with a short video that can be shot and edited in an afternoon. It will teach you to use your audience’s imagination to create a sense of action with only a few suggestive shots. Almost all the "action" takes place between the images.

Two guys face off in a game of one-on-one basketball. One, tall and athletic, looks like he could be a pro. The other, short and awkward, doesn’t look like much of a match for the tall fellow. However, to the big guy’s amazement, the little guy’s game is incredible. Nothing can stop his brilliant drives, soaring slam-dunks and towering jump shots. The big guy can only shake his head in wonder.

What made this kid so good? Well, that’s up to you. Use one of our optional endings, or write your own. Be creative. Use our storyboards as a blueprint or simply as a guide. When you’re done, send us a copy of your tape. We’d love to see your work.

CU – A basketball bouncing in and out of frame. ANGLE WIDENS to reveal Billy Dimwell, a none-too-athletic looking chap dribbling the ball. He’s looking at something off screen. ANGLE CONTINUES TO WIDEN to reveal the torso of a tall athletic guy facing him.

His torso fills the frame. CAMERA TILTS UP to reveal him looking down with the bemused confidence of a pro. He gestures as if to say Come on

MS – BILLY smiles, drops a shoulder and drives hard past the big guy.

CU – THE NET. The basketball bounces off the backboard and through the hoop.

MS – THE BIG GUY retrieves the ball. He fires it back to Billy. CAMERA PANS. Billy catches it with a smile. He dribbles, stops and lofts up a 20-foot hook shot.

TWO SHOT – THE BIG GUY retrieves the ball and passes it back to Billy. He is not amused. Billy dribbles right, spins and throws up a shot.

CU – THE HOOP – Swish from the right.

AUDIO: The sound of the basketball bouncing, tennis shoes scuffling, sharp breathing, then – ANGLE WIDENS as Billy suddenly sails into frame for a soaring slam dunk. (production note: since all we see is Billy’s upper body, he can be standing on almost anything – including the other guy’s shoulders).

MS – THE BIG GUY as the ball bounces off his head. He shakes it off, but his expression hardens. Now it’s personal.

CU – THEIR SHOES – ZOOM IN on their feet as Billy dribbles left, right, left. The Big Guy is on him like glue. Billy stops and his feet leap vertically out of the frame.

MCU – THE BASKETBALL – It just clears the outstretched fingers of the big guy.

AUDIO: A sportscaster-type voice off screen – SPORTSCASTER: (VO) He shoots. He scores!

Think up your own ending to the game, or try one of the commercial-style suggestions below.