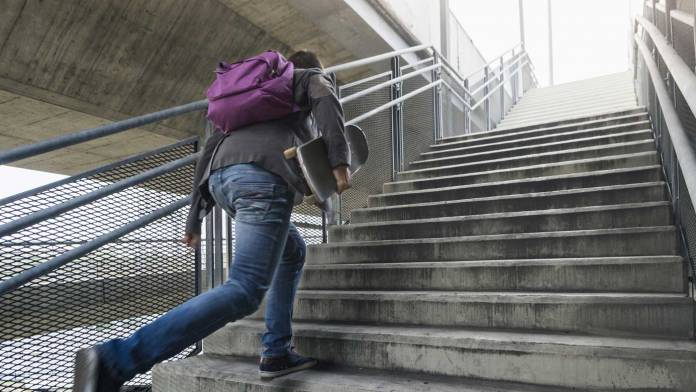 Most of the time we think of commercials as annoying interruptions, but looked at from another perspective, they can be excellent lessons in storytelling technique.

You can tell a whole story with just a few shots if you plan them carefully. Think of this story as a television commercial. You have between 30 and 60 seconds to introduce your character, give him a goal, challenge him with obstacles and bring it all to a satisfying end. Sound challenging? It is, and that’s the fun of it. The ending? We’ll leave that up to you. We’ve provided a few options to get the creative juices flowing.
Click here to download a PDF of Late for a Date Storyboard.


A man is riding in an elevator when he is suddenly reminded what day it is. Panic-stricken, he embarks on a mad dash across town. Not about to let anything keep him from reaching his destination, he hurdles obstacles, jumping over a baby carriage. He crashes into a college student, knocking books and papers out of her hands. He makes a half-hearted attempt to help her with her books and then keeps running. Using his cell phone, he even arranges for flowers to be delivered to him en route. Finally, trading his phone for a skateboard, he careens wildly through a city park before wiping out at the foot of a flight of stairs. He is greeted by the delivery person, claims his flowers and races up the stairs to an impressive door. There he pauses for just a moment to recompose himself before stepping inside.

What happens next is up to your imagination. Maybe it’s his rich old aunt’s birthday and he is trying to stay on her good side in order to have a shot at the inheritance. Maybe he’s meeting his wife for what he thinks is their anniversary only to have her point out to him that it’s actually her birthday. Or maybe he’s just raced across town in order to be there for his daughter’s first violin recital. It’s getting him there that’s the fun part. Use our 15-shot storyboard or think of your own creative obstacles for your hero to overcome. When you’re finished, send us a copy of your video. We’d love to see how things worked out.

To make this video you’ll need:

At the center-rear: Average Joe. Two passengers are in front of him. ZOOM IN on his face to show panic.

Passenger 1: Are you sure?

A bell chimes. The doors start to open. Joe, at front, tries to pry them open faster. ANGLE WIDENS Shoves his way out, throws frantic glances in both directions and takes off.

Joe sprints down the street. He hurdles a baby carriage, glances at his watch, dodges a trash can.

Camera zooms in quickly as she steps out of a doorway. She glances over, throws up her arms and screams.

Joe helps her with her books, hesitates a momentshe’s really cutethen he gets up and backs away.

Breaking a sweat. A glance to his right. Camera pans as he crosses a street and enters a park.

Joe whips the cell phone from his pocket and dials while sprinting past a bicyclist.

A clerk answers. Behind him a sign reads: “We Deliver.”

Joe hangs up. Camera pans as he passes a group of skaters. Trades his cell phone for skateboard, jumps on, takes off.

He slaloms downhill on a busy sidewalk. Pedestrians dive out of the way. A dog darts across his path. Joe lets out a yell.

The skateboard shoots by without Joe. Pan left to reveal Joe lying on his back tangled up in the dog’s leash. Stairs are visible behind him.

He picks himself up, gets flowers from the delivery person. Angle widens as he rounds a corner and runs up stairs.

The heavy doors are closed. He makes an attempt to adjust his hair and clothes, takes a deep breath and opens the door.

shot 15:
Video Inside the room.

You decide what happens next! Use one of our endings, or create your own.
Optional Endings:

A tiny old crone decked out in diamonds and pearls faces a birthday cake crammed with extinguished candles. Angle widens as Joe leans over her shoulder, hands her the flowers and kisses her on the cheek.

The old woman takes the flowers, scoffs and tosses them onto a large pile of presents.

Joe smiles weakly, steps back and merges with family members crowded behind her.

Spokesman (vo): Worried about your financial future? Talk with the financial advisors at Whimmer and Whimmer.

MS Woman at a dinner table.

She glances up and smiles as Joe enters the frame and hands her the flowers.

Joe slides into the chair next to her.

Joe: How could I forget our anniversary?

Spokesman (vo): Speedy Flowers. The perfect gift no matter what the occasion!

A young girl stands in the glow of a spotlight. She drops the violin from her chin and bows. APPLAUSE. She runs offstage into the arms of her mother just as Joe steps into the frame. He hands his daughter the flowers and gives her a kiss on the cheek.

Joe’s Daughter: Daddy, Daddy, you made it!

Joe: Of course, sweetie, I wouldn’t miss it for the world.

Joe and his wife share a quick glance. She shakes her head, leans over and gives him a kiss on the cheek.