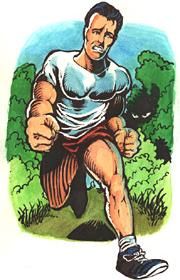 A chase sequence is a common element of both suspense and action adventure movies. It’s a very successful tool used by video and film directors world wide. The purpose is to grab the attention of the viewer, both emotionally and psychologically. We have designed a ready-made chase sequence that you can produce yourself. The pre-production is done for you, all you have to do is follow the attached storyboard.

Our chase sequence consists of various shots, angles and techniques assembled into a one-minute video. Spoken dialog will not be necessary for the sequence. Natural sound will be used. If you have the equipment, adding a suspenseful music track may enhance the drama of the piece.

For best results use a tripod for most of the shots we describe. Some frames, however, call specifically for handheld shots. If done correctly the handheld shots add to the intensity of the sequence. For example, when the camera is handheld looking through the bushes at the bewildered jogger (as seen in frame five of the storyboard) the viewer of the videotape sees from the point of view of the stalker. This is called a subjective shot or a point of view (POV) shot. Notice that the storyboard requires a variety of shots. Use them as a guideline, but don’t be afraid to experiment with variations of angles.

In our sequence, the subject, out for a leisurely jog, is followed by an unseen stalker. Tension mounts as our jogger becomes aware that he is being watched. He stops jogging and looks around. We can sense his fear as he begins to run again. Finally, our subject finds himself in a safe place… or so he thinks!

The last shot we’ll leave to you. Does the jogger meet his doom at the hands of a crazed killer? Is he confronted by an over-zealous Girl Scout selling cookies by the box? Is he presented with a giant check by the sweepstakes prize patrol? It’s up to you.

So grab some friends, get to the local park and cut to the chase!

Frame 1: Title graphic
THE CHASE (for titling tips see Titling For Under a Buck by Patrick Lang in this issue.)
Frame 2: XWS
A path in a city park… people riding bikes and picnicing.
Frame 3: MS
A jogger enters the shot and trots along the path straight toward the camera.
Frame 4: WS
The jogger runs across the screen (right to left).
Frame 5: MS
(shaky handheld) The jogger is seen through tree limbs and bushes as though through the eyes of an onlooker. The jogger glances toward the camera.
Frame 6: MS
The jogger slows to a stop and strains to look toward the bushes.
Frame 7: WS
Jogger is seen again through the bushes. This time the camera is steady, the stalker is apparently gone. The jogger turns startled and runs away.
Frame 8: XCU
A shot of the jogger’s feet pounding the path.
Frame 9: CU
Show the jogger’s fearful eyes and sweaty face as he flees.
Frame 10: WS
The jogger runs off the path into the woods.
Frame 11: MS
(shaky handheld) The camera follows the jogger through the woods.
Frame 12: WS
The jogger exits woods onto a neighborhood street.
Frame 13: CU
We see the jogger’s frightened face as he stops and looks around confused.
Frame 14: MS
The jogger runs into a house.
Frame 15: XCU
The jogger turns the door knob and enters house.
Frame 16: MS
The jogger relaxes with his back against the door.
Frame 17: CU
The jogger turns quickly, looks into the lens and screams in fear.
Frame 18: MS
Shot of the stalker, in the house waiting for him. You decide who it is and what they say or do!