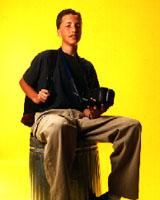 It’s not just for birthday parties anymore. The video revolution is moving in a more practical direction thanks to that mother of invention: necessity. Everyday people have come up with new ways to use video for everyday activities. We’ve rounded up a group of enthusiastic people who saw past the novelty of the camcorder and are putting the potential of video to some enterprising and unique uses.

Jack Rosebush worked for years as a still photographer in conjunction with his horse farm. Now Rosebush has gone back to school to employ the power of video in his business. Selling horses requires that prospective owners take a look at the animal and a video portrait does the job. "It helps sell the horse because people want to see a horse move," Rosebush says of his video sales approach.

Selling horses isn’t the only use for video in his business. Rosebush is now branching out and sending his horseflesh tapes to animal chiropractors for a video diagnosis. He says video is a boon to the horse world because it cuts down on travel time for buyers and doctors which translates into a cost savings for all involved.

Rosebush first turned his camera on his wife Jill’s dressage lessons and is now making rodeo and barrel racing videos to help riders master the sports. Rosebush says the subtleties of riding are captured perfectly on video, making it easier to analyze mistakes and learn new techniques. "It’s worth at least three times or more on the learning curve than taking three lessons," he says. Rosebush says the video inspiration was a natural result of what he was doing with horses.

John Charter was working under a more glamorous inspiration when he decided to use video to document his friends skateboarding. The 16-year-old high school student worked on his dad’s farm for quite some time to earn enough money to buy his Sony camcorder. "I’ve always wanted to be a director," he says. "I wanted to film my friends skateboarding."

Charter has had his camcorder for about a year now and is learning the details and tricks for producing a finished product. With several class projects and short pieces under his directorial belt, Charter is now setting his sights on a feature-length production. The enterprising student is working on buying an editing program for his home computer, until then he’ll keep on editing in the camera as he shoots.

His experience has taught him the basics of videography. Proper framing and knowing when to use a tripod are second nature to him now and he plans out the order of shots beforehand.
"If I make a mistake, I just start all over again," he says.

He also has some tips for first-time camcorder buyers. "Don’t buy a camera with a bunch of special effects," he says. "Most of those cameras don’t do much for you anyway and overuse of special effects can ruin a video."

When Tim and Sue Driscoll left the U.S. three years ago to serve as missionaries in Japan, they knew it wouldn’t be possible to see family members regularly, so they went out and bought a camcorder. "We knew the grandparents would want to see the kids," Tim says. The Driscolls capture their growing family on video every three months or so, and ship the tapes home where family members can see just how fast those grandkids are growing up. "It’s a lot cheaper than airfare," Driscoll says.

The family also uses the camcorder to file reports to their church. Driscoll says the video letters are a great success and the quality of the tapes is improving all the time. "I’ve learned that short shots are better," he says. "And I change the position of the camera to ‘kid level’ while varying the shots."

While the Driscolls choose to keep their own memories in a more traditional scrapbook, the family back home is delighted to see the children running around and acting like, well, little kids. "The videotapes help the family feel closer to us and the grandkids," Driscoll says. "I don’t think they’ve missed as much as they would have being so far away."

The Driscolls tape special occasions and everyday events and it takes a few months to fill up the tapes which the family saves as video scrapbooks. Driscoll thinks video letters are great for families living far apart. "I think if you’re far away from your family, I’d recommend it," he says.

Steve Blankenship has been part of the video revolution since the beginning. He saw the popularity of video ten years ago and started taking classes to hone his video skills. Blankenship is often seen running along the sidelines at local high school sporting events and admits that he gets a rush covering live events. Blankenship believes in working solo and enjoys the independence video gives him.

"I’m able to go where I want to go, as a cameraman," he says of his sports coverage. "The camera work is what I enjoy the most." His S-VHS adventures got him a spot on the crew of a documentary shooting in Mexico. Blankenship ranks the trip as his biggest video adventure yet. "I’m not fond of flying," he says, "and I had to fly in a small plane."

His basic, straightforward style has led to other assignments like shooting local sewer systems for city inspectors where he learned the fine art of dodging drug dealers and unfriendly dogs. "There were places that were just plain scary," he says.

Blankenship divides his time between his video hobby and his daycare business. He hopes to take his experience of shooting live events to a more professional level in the future. Until then he lives for the challenge of covering a live event well. "You can’t do it over if something goes wrong," he says.

All construction sites have to be inspected, and Jack Sutherland has been applying his expertise to the profession since 1979. He uses video to keep a record of job progress and difficult situations. "It’s been very useful in finding things that are covered up later on in the construction process," he says.

Although he thought about buying a camcorder in the early 1980’s, Jack wasn’t satisfied with the quality of the early cameras and held off until recently when higher definition products came on the market. He bought a Hi8 camcorder in 1990 and has been using it regularly ever since. "I think it’s a very valuable tool for clients and business in general," he says. Sutherland says video is better than still photos for gaining a real perspective on what the job looks like.

Sutherland’s camera work has extended to family vacations but he still uses it mostly for business, taping seminars and creating training videos. He believes in the basics of camera work. "Watch your pans and don’t do a whole lot of zooming in and out," he says. "That gets boring after awhile." Sutherland also recommends keeping lighting in mind when setting up a shot.

His work is seen routinely by the architects and engineers he serves. "My job is to look out for safety conditions and see that the construction is being completed according to regulations."

Sutherland’s clients can take a look at the project even if they’re miles away. Sutherland says the process saves time and money, especially for engineers who may work in another city or state.

Technology will soon make Sutherland’s job even easier. He’s looking forward to the day when he can shoot video, transfer it to his computer and send it over the Internet to the parties involved in the project.

Video has become a part of many lives but for most it still serves as a novelty ushered onto the scene for weddings, birthday parties and other special, usually family, events. As time passes, people who never gave video a thought are finding more and more practical and unique uses for keeping a video record. The camcorder allows us to be in more than one place at a time and as we’ve discovered, it increases our ability to learn and communicate.