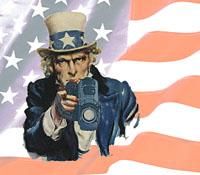 The television revolution changed the way Americans view the world. Now the camcorder is making that view much more personal. From reality-based shows like Real TV and America’s Funniest Home Videos, to powerful personal moments captured for programs like MTV’s Unfiltered, Americans are more involved than ever in creating television in their own image. And while this brave new world has made it virtually impossible to be naked in your own home, or to fall down without the indignity of millions watching, it has also redefined television entertainment and news in a way only Americans can–by taking charge of the camera.

Going into its ninth season, America’s Funniest Home Videos is the cornerstone of viewer-created television. Producer Barbara Bernstein says what makes the show a hit with viewers and videographers is accessibility.

"I think that this show has had a tremendous influence on the prevalence of camcorders," Bernstein says. "I think of our show as a public access show. You shoot something in the kitchen with your kid. You send it in to our show. And it could very directly get on television. There are not a whole lot of middlemen in that process."

Eliminating all of the people who used to stand in the way of the viewer and the program is a big part of how the home camcorder is changing television. Bernstein says because people know there’s an outlet, they shoot more and have a better idea of what will get on the air.

The proliferation of camcorders and shows that feed on their output has changed television in ways that are just beginning to be understood.

"I don’t know that it’s necessarily improved television but there certainly is a place for this material on television that didn’t really exist 10 years ago," Bernstein says. "A good number of shows are being made by people out there who are not in the television business. That is a change in the television industry."

No Story Too Small

The dramatic footage of the Rodney King beating and the resulting riots that produced even more amateur video brought the camcorder into the news arena. Bernstein remembers when that was the exception and not the rule.

"The idea that people could be involved … in the news reporting process didn’t exist to the extent it does now," Bernstein says. "I think the difference between shooting news with a professional crew versus a layperson is a layperson shoots the best way he can to capture whatever it is he’s experiencing. When you report a story professionally, you’re trying to tell every side, every angle of the story and you manipulate the images." In other words, amateur video brings a fresh quality to news footage that is sometimes lost in the professional newsgathering process. "Amateur video isn’t filtered," she says.

Leaving the storytelling to the viewers has become its own art form for Steve Rosenbaum, Executive Producer and Vice-President of Broadcast News Network. BNN provides all types of video to mainstream media outlets but its most innovative achievement was born along with a new technology. Rosenbaum happened to walk into a consumer electronics store the day the Sharp ViewCam first hit the market. With a little bit of persuasion, Sharp loaned BNN five cameras for an experiment that would eventually become MTV’s Unfiltered. The qualities of the new camera didn’t impress Rosenbaum’s producers, but the ease of operation made it a natural tool for viewers who had a story to tell.

The power of this new tool was illuminated to BNN when a woman chose to tell about her silicon breast implants and the resulting injury they inflicted on her health.

"She said, ‘Send me a camera.’ She wanted people to know what happened in her life," Rosenbaum explains. "She interviewed her husband … she interviewed her children and talked a lot in a diary sort of fashion about her life. After she’d had the camera for about a week, one morning she walked into the bathroom and set the camera to record the mirror as she unbuttoned her shirt." The startling images of her disfigured body told the story in a way professionals could not.

"We realized that if we’d shot that tape with a crew, we could never have asked her to show us her injury because it would have been exploitive," Rosenbaum says. "But because she chose to take those pictures herself … it felt like we could show it. And we did."

At that moment nearly ten years ago, Rosenbaum realized that something fundamental had changed. Real people could tell their stories in a way that was more human, more personal and more dramatic than professional journalists would ever dare.

Rosenbaum shopped the idea of viewers telling their own stories to the major networks and found that executives couldn’t let go of their control of what they thought news was supposed to be.

"They didn’t want the viewers in the loop," Rosenbaum says. "They wanted viewers to sit at home and watch quietly."

MTV’s news department did not share that view; they embraced the idea with enthusiasm. Unfiltered is now in its third season and offers viewers the opportunity to pitch story ideas via the Internet or an 800 number.

"One of the things that’s critical about this kind of storytelling is that viewers make the active decision to participate," Rosenbaum says. "We really look for people who have something to say, who believe passionately in something and use the media to get their story told. Everybody has one great story."

Rosenbaum’s secret to success is based on the assumption that the audience is smart.

"Which is oddly a very revolutionary idea," he says. "Conventional newsgathering is based on the idea that we (the reporters) are the authority, and you, the audience, are kind of dumb. If you don’t come to us every week for your dose of knowledge, you’ll be naive and foolish. Unfiltered disregards that."

Including viewers in the process is as simple as picking up the phone.

"Most TV stations in this country have had phones for a long time," Rosenbaum says. "So the decision not to talk to their viewers is an active one, not a passive one."

Rosenbaum says news directors need to accept the fact that viewers are going to be in the newsroom whether they like it or not.

"The people that figure that out and embrace viewers as new partners are going to survive in the twenty-first century," he says. "And the people operating under the old model … are not."

The marriage of entertainment and news is the natural result of the camcorder boom as everyday people exhibit their talents for telling everyday stories in a compelling way. The television industry is more than taking notice. Shows like Hard Copy, Geraldo and American Journal have all integrated viewer-created video into their regular formats.

"It’s like everyone is fighting to jump on the bandwagon of the reality video," says Joe Guidrey, Associate Producer for Real TV. "All the consumer formats are being broadcast on nationally syndicated shows like Real TV."

Real TV is moving into its second season and unlike any other program starts with video and works to rebuild the story behind a dramatic video sequence.

"We go into depth," Guidrey says. "You may see the story reported on your local broadcast news but it will be the "money" shot, maybe 20 seconds at the most."

Real TV goes into the story behind the pictures.

"We give our viewers a better perspective on what the story was about, not just the money shot," Guidrey says.

Real TV pulls tape from many sources and uses a variety of services to find the most exciting and interesting tape from around the country.

"Anything that’s caught on tape, we love to see it," Guidrey says.

"I believe that in a few years, everything that’s broadcast will be digital; then there’ll be more shows created surrounding this reality genre," Guidrey says. "As more people begin to go out and shoot video, the more the market will widen."

Rosenbaum concurs. "I think the home videographer’s interest in video technology comes at a moment where they couldn’t have a more important effect on the quality of news than they will have in the next two years. It’s a critical juncture."

Whether it’s news, entertainment or a completely new style of television yet to be invented, it’s clear the role of amateur videographers will become very important as we move into the next century. Technology has made it possible for all viewers to shoot the kind of stories they want to see.

Julie DeForest is a television producer and journalist.

There’s never been a better time to submit tape for television. More shows than ever are using amateur footage as part of their programs, news broadcasts and features. Just a few of the media outlets actively searching for video are listed below.

You can pitch your story idea to MTV’s Unfiltered. The program allows viewers to design their own story and shoot it with the help of the production company. You can contact the show by calling 1-800-296-2445 or find them on the Internet at http://www.broadcastnews.com and select "Story Idea" from the menu.

If you have a spectacular, out-of-the-ordinary piece of video with an exciting story behind it, Real TV just might be the show for you. Contact them at 1-888-REALTV1, or visit their website at http://www.realtv1.com, and leave them a descriptive message about your video. They really will call you back.

AFHV began its ninth season on ABC with a brand new look and feel last January. To compete in the annual contest for best video and to embarrass your relatives and friends on national television, write to:
America’s Funniest Home Videos
PO Box 4333
Hollywood, CA 90078

The popularity of AFHV may have prompted this Fox feel-alike show. The producers will pay $200 for any clip that they decide to air. Send your tapes to:
World’s Funniest!
P.O. Box 2904
Toluca Lake, CA 91610-0904