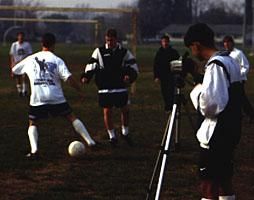 At every Videomaker Expo we listen to teachers who are struggling to use video in the classroom, either as a learning resource or as a course in itself.

Where can I find curriculum guidelines? What equipment should I buy? What facilities do I need? What about digital editing? What’s a good textbook?

Video is a growing concern in education at all levels from elementary to grad school, but teachers don’t seem to find the support they need. How come? Partly because the subject is too new to benefit from a broad base of experience, and partly because no one has quite decided what video instruction is for, where it fits in the education process, or how to deliver it to students.

Whether or not you personally deal with video in education, please stick around because we’re reversing our usual approach here. Most Videomaker articles help you do something practical. This one asks you to help us do something instead. We want to hear your thoughts about video in the classroom, including:

Check out the sidebar nearby for ways to ship us your contributions. We’ll use them to help shine a Videomaker key light on the exciting (and frustrating) topic of video in education.

Here’s a brief survey of the subject, intended to spark an idea or two in your brain.

Video as a Tool

Most school video happens outside formal production courses. Camcorders are working in all sorts of classrooms, helping teachers communicate information and students express their ideas.

On the teacher’s side of the desk, video offers a powerful tool for presentations. For example, consider chemistry labs, where demonstrations can be tedious to prepare and clean up. One well-executed video could replace repetitive demos for multiple course sections.

In many lab bench experiments, a camera offers a better view as well. Dissecting a grasshopper is hard enough to do without trying to show its tiny innards to thirty students. A well-placed camera and monitor can perform that chore with ease.

And video shines even brighter as a resource for students. First of all, it motivates them because it’s an almost instinctive form of expression; it is, after all, the medium they’ve grown up with.

For students who have trouble getting their point across grammatically in their writing, video can offer a highly successful alternative. In some cases, video is the medium of choice for these students. I know one English honors student whose Hamlet essay analyzed speeches by Hamlet, Claudius, and Polonius, as performed by 12 different actors in four different movie productions of the play. She submitted the essay with a taped anthology of the speeches in all versions.

Meanwhile, in many speech and debate classes, students routinely tape every presentation for later analysis, just like a football game. (Sports training is, of course, the most widespread video application in schools.) Drama classes use video for analysis too, but also to teach acting in this different and more intimate medium.

We could expand this list almost indefinitely, but you get the idea.

Video as a Subject

Important as video may be throughout the curriculum, most of the school instructors at Videomaker expos are teaching or preparing to teach video as a subject itself; and they find themselves climbing through the dense branches of a decision tree. Before everything else, they have to decide why they are offering video in the first place.

For some, the goal is media literacy: the understanding of how video communicates and the ability to detect and analyze the messages below its often bland and simple surface.

This can be achieved through classroom study and discussion, of course, but it’s better to have students do it themselves. In one exercise, two teams taped a football game between their school and its arch rival, one from the home team’s point of view and one from the visitors’. (Needless to say, the theme of one video was, "David Slays Goliath," while the other’s was "Injuries and Bad Luck Deny Goliath a Well-Deserved Victory." On the surface, both videos were equally convincing.

When media literacy is viewed aesthetically rather than socially, the result is a course in movie making. Up to a certain point, film and tape are simply different recording media, and the growth of digital post production is bringing the flexibility of film editing to the medium that once was disdained as mere "TV." The grammar of film, the principles of composition, the art of montage–these are pieces of a fine arts course as legitimate as painting or pottery.

Realistically, however, video is too new to have won full acceptance in most Social Science or Fine Arts departments (at least at the high school level). But it has been embraced by vocational/technical curriculums. Production courses are widely taught at the high school, junior college, and four-year college levels.

But what kind of courses are they? The answer depends on how long-established they are and how their instructors think about the medium.

Older curriculums tend toward TV, with the emphasis on multi-camera studio production and training for jobs on the six o’clock news. Though studio operations are increasingly automated nowadays (and the studios themselves are being supplanted by computer-generated virtual sets), TV courses continue to supply professional technicians to the industry.

Increasingly, however, video is being recognized as a professional alternative to film, and newer courses are essentially film production classes adapted to the new medium. As digital recording and editing grow cheaper, simpler, and more versatile, broadcast quality pictures and sound are becoming available to operations with less than 25 thousand dollars to spend on hardware. If that still sounds like a lot for a school to shell out, consider that high schools routinely spend more than that on each PC computer lab.

Applications for video are proliferating faster than we can keep up with them. As for hardware, a technology that was once as mature and slow moving as hi-fi audio is suddenly evolving as fast as the computers it is embracing.

In short, since video is one of the fastest-growing components of our society, it offers powerful opportunities for educators.

Who are the Students?
We’ve talked about video across the curriculum but barely mentioned the other axis: up and down from kindergarten to graduate school. Since video demands a heavy investment in hardware, facilities, and time, and since it must jostle other courses in competition for a limited number of school hours per day, what is its natural and most effective grade level?

The short answer is: any and all of them, just like math or English. Professional-level production is probably best suited to high school and up, but media literacy is (or ought to be) a major concern at the elementary level, where students are often babysat by TV. Though my own children arrived before the video revolution, they were handling still cameras at age three, and I bet they could have used simple camcorders too. Am I right? Let us know.

Continuing the personal note, my most gratifying experience right now is with three developmentally disabled students mainstreamed into my production course. With judicious help from their special education classroom aide and a little ad-lib curriculum adjusting, they are producing respectable videos, complete with titles and effects. Along the way, they are making great strides in cognitive and motor skills, and their pride and enthusiasm reward me more than I can adequately express.

As I write this, I’ve just seen the PBS documentary on Lewis and Clark; and I think video in education is much like the uncharted country that they explored: vast, varied, and sometimes dauntingly difficult, but rich with possibilities beyond imagination.

So, video explorers, tell us about that country where you’ve been pioneering. In the century that’s rushing toward us, the immense territory of education is the frontier we’re going to develop.

SIDEBAR
Tell Us About It

We’d like to hear from educators and students about their experiences using camcorders in the classroom. Send your stories (and videos, if available) to:

If you’d prefer to work electronically, you can send e-mail to editor@videomaker.com. We can’t promise that we’ll publish anything you send, and anything you send to us will become the property of York Publishing, Inc.