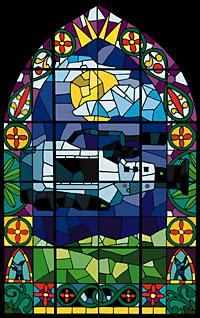 The murmur of voices quiets as the lights begin to dim. A thousand faces turn to watch a screen descend from the ceiling, coming to rest just above a stage. Suddenly, the screen erupts with dazzling 3D graphics and fast-paced music. Every mind–young and old alike–is captured, enriched and challenged by the sights and sounds that fill the room. Four minutes later, to enthusiastic applause, the screen fades to black and slowly ascends to its resting place. The lights return to full brightness as a man steps onto the stage, book in hand. "Please turn to hymn number 427," he says.


In countless houses of worship all across the country, a scenario much like this one is played out every week. According to numerous ministers, pastors and priests, "sanctified" video is quickly becoming one of their most effective means to educate and motivate a congregation. It’s also an opportunity for hobbyist and prosumer videographers to offer their skills to their local houses of worship.


As we prepared this article, it became apparent that not all worshipping communities use video in their services. "Video would never be used in an Orthodox Jewish service," says Henry Posner, a professional photographer and Director of Training for B&H Video. "From sundown Friday to sundown Saturday, Jews are proscribed and prohibited from performing any work. This includes generating electricity, like turning on a light bulb, video camera or television." Weddings and Bar Mitzvahs are the only services that are often videotaped, with the permission of the rabbi, because they never happen on the Sabbath.


Catholic churches are most likely to use video as an outreach tool for homebound parishioners, instead of integrating it into the service. "It’s rare to see video used during a mass," says Paula Pang, volunteer director of Archdiocese of San Francisco’s TV Mass for the Homebound. "We produce a weekly broadcast of the San Francisco mass and broadcast on cable channels throughout the Bay Area, Monterey and Sacramento. Our ‘teleparishioners,’ as we call them, will contact us and we will put them in touch with a parish near them that can provide other homebound services." The Catholic church does, however, make extensive use of video as an educational medium, producing VHS tapes for distribution through various auspices.


Of the congregations consistently using video in their worship services, most are Protestant. "I don’t think we knew initially what would happen when we started using video," says Brian Glassford, Director of Media and Communications at New Song Christian Fellowship in Nashville, Tennessee. "We’ve seen people respond in ways we couldn’t have imagined."


"Video is still a somewhat new medium for churches," says Jim Myers, Creative Arts Pastor at Hoffmantown Church in Albuquerque, New Mexico. "But the response is tremendous. You can do so much with video to capture true, spontaneous emotion."


"The most effective use of video is when it’s home-grown, when people can see their own faces and the faces of people they recognize," adds Lee Hotchkiss, pastor of Evangelical Free Church in Chico, California. "We’ve purchased some [nationally distributed] videos, but they don’t have the impact of seeing someone you know."

Video use among churches frequently falls into two broad categories: videos played during a religious service, and the taping of the service itself (or special events) for distribution.


More common than wide-spread distribution is the integration of short video segments into the service. New Song Christian Fellowship uses this approach frequently. "The goal of our video department is to promote other departments within the church," says Glassford. "We go out and record a special event, shoot some interviews, put in music, edit it and play it for the congregation as a way of showing what’s going on in that department. Secondly, we try to promote different ministries through video. We want the audience to respond, either by signing up for an event or asking for more information."


"We use video for promotion purposes," says Myers, "much as any venture would use a TV commercial. We’ve also used video as intros for a teaching series. It’s almost like having a news person with an inset box over his shoulder, tied in to what he’s talking about."


"We also use video for testimonials," adds Myers. "We have three services–with video, we don’t have to have the same people get up and do their testimony over and over again. We can tape it anywhere we want, we can make them comfortable, and do some nice aesthetic shots."

Documenting special events, trips and holidays has proven to be an effective use of video for many congregations. "For the past several years," says Hotchkiss, "we’ve shot and edited our youth mission outreaches to Mexico. We edited the last couple of trips into two distinct videos–one is shorter, with a music background that moves pretty fast. This is the one shown on Sunday morning. A second version is more like a documentary–it’s longer and used in recruiting, but not in the sanctuary."


"We will videotape special events," says Glassford. "The most unique special event we’ve covered was a Christmas drama we did last year. It was a full-fledged production with special effects, disappearing people and a lot of humor. We shot it film-style with a single camera. It went over great."


Speaking of productions, today’s church videographers seem to understand that a poorly done video is worse than none at all. The long-winded, unprofessional church video appears to be a thing of the past, at least among these interviewees.


"If at all possible," says Hotchkiss, "churches should try to make their own videos. Quality is the most important thing–I’d rather not do anything if the quality is going to be poor."


"Our videos have to be professional," echoes Glassford. "They should be at the highest level that we can produce with our equipment, a level that people are used to relating to. Pacing is one of the things that I stress the most when I start a video. I want to make sure the video doesn’t slow down from start to finish. When people watch it, they’re always left wanting more, and not wishing it was over."

With video proving to be such an effective means of communication for churches, those that use video often find themselves clambering for new, innovative ways to apply it.


"We’re doing a video brochure," says Myers, "which is a little out of the ordinary for a church. It’s not so much a nuts-and-bolts ‘here are the ministries we offer’ video, but more a testament to how church really affects people’s lives. It will probably feature a group of nine to twelve people set up in a news-magazine interview style. They’ll interact amongst themselves to get to the real heart of what church is all about and what it means to them. We can cover factual stuff about church programs with printed material, which is very easy to update."


"We’re doing some tests with a video loop and computer graphics," says Glassford," that would run whenever someone’s at the church–sort of like advertising. In the long-term, we want to explore CD-ROM and multimedia for teaching."


Al Edwards, a sales associate at Professional Audio Video Systems Services in Brooklyn, New York, sees an increase in sales of video production equipment to churches. "Video use in churches is growing every day–I see smaller and smaller churches doing more videotaping of their services. Larger churches are doing more than just audio and videotaping, but video conferencing, satellite downlinks and such. There’s one particular church I work with that wants to install a video editing system in a back room, because they’re going to put a show on cable once or twice a week. This kind of thing is becoming much more common."


If you’d like to help your house of worship get up-to-speed with video, don’t let a lack of resources stop you. Start with small, simple videos you can shoot and/or edit yourself–just remember to keep them short.

The Well-equipped Church
Two of the houses of worship represented in this article have impressive video production systems. Here are the details on their equipment.