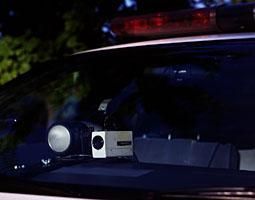 Red lights in the rearview mirror, a momentary burp of a siren and then the long wait as an officer walks from his cruiser to your car–these are the sights and sounds of a traffic stop. Sights and sounds that are being captured more frequently on videotape.


Local police departments are just beginning to explore the possibilities of video as a tool for increased safety and training.

In Northern California, the Petaluma Police Department is just starting to use video as part of its traffic enforcement effort. Using equipment Pacific Bell Telephone Company donated, Petaluma P.D. has one car outfitted with a VHS camera and recorder designed specifically for the job. A mini-cam and monitor are mounted on the dashboard and connected to a standard VCR, which is secured in the trunk. The system activates automatically when the officer engages lights and sirens or he can switch it on manually. The officer wears a wireless lavalier microphone.


"You get great sound, great picture quality," says Officer Ken Savanno, who oversees the program. "There are a whole lot of things that it’s accomplished for us; it assists us with investigations and it helps the district attorney in prosecuting cases."


Savanno says the ability to critique arrests or high-risk situations like vehicle pursuits and tactical operations gives officers the chance to improve techniques that increase safety.


"It very much increases officer safety," Savanno says. "If someone assaults an officer it’s going to be on the video along with sound."


After only a few weeks using the equipment, Savanno is so pleased with the results he hopes to see the department outfit all of its patrol units with video cameras soon.


While the system has been a success for Petaluma, in San Diego where the traffic division seeks out the city’s 44,000 unlicensed drivers daily, video cameras did little to increase conviction rates resulting from traffic stops. After three years, the department decided that other divisions would have better use for the cameras.


Sgt. George Youkhanna, who heads the program, found that certain logistical problems made video on patrol difficult. "Anytime you videotape something, it’s subject to discovery by the defense," Youkhanna explains. "It means you have to take a person and sit him down in front of a monitor and make an exact copy of the whole videotape."


The process requires the presence of an officer who will later swear the tape had nothing added or removed from it. That added to payroll costs and took officers off the streets. Storage was another serious consideration for Youkhanna who soon found himself buried in videotapes he was required to archive. Nonetheless, Youkhanna says video was helpful in reducing the number of unfounded officer complaints.

When it comes to crime scene investigation, the Georgia Bureau of Investigation has more than 60 years of experience sorting through the details of foul play. Video cameras are standard equipment for these crime-scene units.


The GBI uses a variety of 8mm video and 16mm film cameras in the field, but Director of Public Affairs John Bankhead sees the need for digital cameras growing. Bankhead is in charge of the agency’s website and uses the Sony DCR-VX1000 Mini DV camera to post pictures of fugitives and other photos online. Digital equipment in the field allows the bureau’s network of computers and web pages to process the information more quickly.


Bankhead likes the Sony because of its small, lightweight design. "Professional TV cameramen are always impressed when I bring it out," he says. The GBI has used video for about 10 years and now trains agents in video techniques. "I remember when they first started; they were panning too quickly," Bankhead says, "making a lot of beginner kinds of mistakes."


Although those mistakes are behind them, Assistant Special Agent in Charge David Mitchell who runs the crime scene unit has some reservations about adding video to investigations.


"To shoot video, you have to go through the scene another time before you can go in to collect evidence," Mitchell says. The destruction of delicate evidence, such as a footprint in the dust, is a hazard of videotaping a crime scene.


"On the other hand, the public wants to see video," Mitchell says.


In Petaluma, a special video call-out team responds to a variety of crime scenes including shootings, stabbings, domestic violence and of course any wrongful death investigation.


Savanno feels video is superior to still photography because it reduces the time needed to capture the crime scene, and it provides a more realistic perspective.


"The crime scene can be videotaped in much less time and you can’t necessarily reconstruct it accurately from just a photograph. You don’t have all the depth perception," Savanno says.

Savanno says video does a better job of corroborating evidence and its meaning at the crime scene and saves investigators extra hours of work when the defense decides to challenge the prosecution.


Petaluma’s Community Service Officer Charlene Abbott is part of the call-out team. She and her fellow officers went through five days of training and then took the equipment home to start learning the hard way.


Officers record Petaluma’s crime scenes on a Sony 8mm camera and then transfer it to standard VHS.


Abbott says the equipment is low-end but adequate for the task at hand. And, of course, there’s a good chance Petaluma’s already considerable commitment to video will include an upgrade.

The next time you watch a protest demonstration on TV or find yourself in the middle of a civil disturbance, you’ll notice that some of the law enforcement officers are using video cameras.


During the 1996 Republican Convention in San Diego, camera teams from the local police department would respond to certain areas where protests were being held or problems were occurring. And GBI cameras were on the job during the dozens of white supremacist protests and marches during the late 1980s.


The crowds at the ’96 Olympic Games were extensively taped by Georgia law enforcement agencies, including the GBI, with an added bonus. After the athletes went home, the video equipment purchased especially for the event stayed behind, adding to law enforcement’s inventory.


Warrant searches are another, albeit less glamorous use of the video camera.


"Once we secure a house, we videotape the inside of the house," Savanno says. "Then we do the search and videotape the house again to show the house isn’t demolished." The added protection of video stops later claims of police misconduct.


Video has taken police training to a whole new level. While all departments train officers in the basics, video of actual police situations are more valuable for field training.


"Officers become better and more efficient and much more effective to the community as they go through their careers and gain experience," Savanno says. "Watching a video is another way for a person to gain that experience without actually having to be there and it can be shared with so many people.

The public has gotten used to a steady diet of police video from the ride-along action of Cops to the sometimes startling traffic stops that make the evening news. Because of video’s unemotional testimony in the middle of what can be a controversial situation, police cameras are likely to keep rolling to protect officers and prevent unnecessary litigation.


Despite the amount of video the public sees daily, most departments pick and choose which crimes they will tape, reserving video for major incidents.


"Juries like to see it," Mitchell says. "We actually spoiled juries and the public by having copies of video for them to see when cases came to court." Prosecutors now expect video as part of an investigation.


Cost is the most prohibitive factor for police departments looking to add video to their crime-fighting tool kit. Youkhanna’s traffic division is larger than the entire Petaluma Police Department. He says the only way video cameras could return to patrol cars would be with the help of grants or other outside funding.


Ultimately, the decision to use video in law enforcement comes from the top and officers who have the support of the administration.


"Fortunately, the agency has always been very progressive," Savanno says of the Petaluma Police Department. "They’ve always tried to be on the cutting edge of technology that comes out for us. That only makes sense because this job is hard enough without being limited by not having access to certain technologies that make us more efficient and much more effective. It hinders our ability to do our job and serve the community. So if video helps us, we’ve always tried to be there and have it implemented."