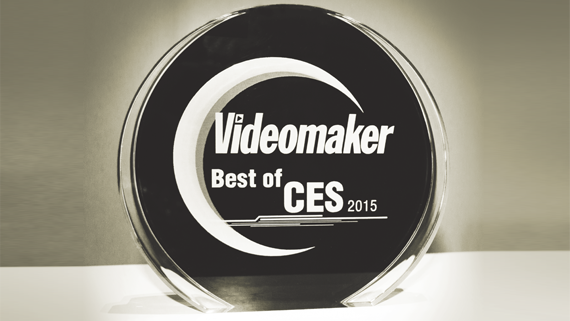 Videomaker treks to the International Consumer Electronics Show each year to seek out new products that make the process of video production better and easier than ever. We know there are lots of cameras out there, and lots of products with cameras in them. When you want to find out which ones are likely to be the start and end of your research, look to our awards for the best from several categories. We awarded a lean 11 products out of hundreds during CES 2015, so each of these beats the competition in multiple aspects.

For excellence in an action camera, Sony continues to show commitment to making better cameras. In the FDR-X1000V they’ve added 4K recording at 3840 x 2160 and 30 frames per second. At the respectable 720p, it can shoot 240fps. The FDR-X1000V has Auto Non Flicker, Advanced SteadyShot Image Stabilization and custom white balance. Considering the number of updates on action cameras throughout the industry, the FDR-X1000V is possibly the most improved action camera available.

To find which products are likely to be the start and end of your research, look to our awards for the best from several categories.

Always key with action cameras are the mounting options. The FDR-X100V is tripod-mountable even without the included waterproof case. When you add the case, you get dust, shock and water proofing. There’s simply more “yes” when it comes to the FDR-X100V and what it can do. Since Sony brought in Tony Hawk to help promote it, we’re excited to see how Sony will top themselves next year.

JVC gets professional with a camera whose prototype we saw in a glass case many months ago. The GY-LS300 4K is the first interchangeable lens 4K camera from JVC. Not only can it use different lenses, it has electronics that help it adjust the sensor to accomodate lenses from many third parties.

The GY-LS300 is also great at getting video distributed by streaming directly from the camera while simultaneously recording to two formats. JVC is a pioneer once again, making 4K video accessible to more people.

Running an IPS display, 3440 x 1440 resolution and 60Hz, the 21:9 widescreen aspect of the Dell UltraSharp 34 Curved Monitor has potential to take the place once occupied by your dual monitors. The Dell UltraSharp 34 Curved Monitor sports six USB 3.0 ports, two DisplayPorts, a Mini DisplayPort and an HDMI port. It is also decorated with environmentally-conscious awards. The substantial warranty and guarantees make the investment more enticing, though it’s sure to be at the top of your budget.

We are pleased to award the Dell UltraSharp 34 Curved Monitor as the Best Monitor of CES 2015.

Making drones simple is no easy task, but Squadrone System took on the challenge, separating the HEXO+ from the plethora of drones at CES by aiming to make a straightforward, user friendly drone that will follow and record your adventures.

Their Kickstarter campaign went way over goal, so we know there’s great investment behind this drone. The app makes shooting with the HEXO+ as hands-off as possible. With no remote control, there’s no piloting necessary. It can land and take off autonomously while you chose the angle: front, back, sides, close or far.

You do need to provide your own GoPro, as the gimbal currently uses this mount exclusively. Blue propellers indicate the orientation of the camera, which Squadrone System notes will save you the time of using gaffer’s tape to mark the drone's direction. For $1,150, you can order a HEXO+, and it will ship in September.

We are pleased to award the HEXO+ as Best Drone of CES 2015.

We’ve seen drones, we’ve seen remote shutters and now at CES, we’ve seen the ZANO, a nano drone. It’s small — with four tiny propellers, onboard flash and a Wi-Fi module — and could pass as a Transformer toy.

ZANO can hold its position in air, use a timer, and have its batteries changed or charged up via Micro USB. It can be commanded to come back-to-base and follow your phone, which helps it behave more like a pet. You might even name your ZANO, and who knows, at $170, it’s likely cheaper than caring for an actual living creature.

For making video capture with a drone accessible and convenient, the ZANO is a standout at CES. ZANO is set to be available in June 2015, with optional accessories and in-app purchases. The ZANO comes in either black or white. For the Kickstarter, the Torquing Group Ltd. created limited edition versions in camouflage and glow-in-the-dark color schemes.

We are pleased to award the ZANO as Best Gadget of CES 2015.

Grabbing your drive on the run is a lot easier said than done if you’re worried about the safety of your hard drive. All the footage you shoot needs to be protected! The Rugged RAID from LaCie will withstand hits in the field and in transit, while providing RAID 0 or RAID 1 benefits. Even if storing your data isn’t a favorite pastime, won’t you be glad when your project has been mirrored on the Rugged RAID if ever your computer were to fail?

The Rugged RAID comes with either Thunderbolt or USB 3.0 compatibility at the price of $429 and includes three years under warranty. With 4TB of RAID, up to 240MB/s read/write speeds and resistance to dust, water and shock from drops up to 5 feet, the Rugged RAID is a storage device to be reckoned with.

We are pleased to award the Rugged RAID as the Best RAID of CES 2015.

Store lots of data and bring it with you on Samsung’s Portable SSD T1. We came across it at CES and would’ve loved to take it with us since the very nature of being an SSD means no moving parts, and that means it’s less likely to be damaged during transit. We didn’t test it at extreme temperatures, but the Dynamic Thermal Guard will kick in if necessary to protect the stored data. As a slim and compact storage device weighing only one ounce, it would be simple to pop this in the mail for a client. This form factor makes the Portable SSD T1 attractive to carry around, especially considering that some business cards may actually be bigger than this solid state drive. The exFAT file system should eliminate reformatting when it comes to using different computers.

We are pleased to award the Portable SSD T1 as the Best SSD at CES 2015.

Light up more shots with the Lume Cube. The $60 Lume Cube is reduced to $50 when two or five are purchased, and why not go for more lights? The app to control them is available for Android or iPhone and can manage five cubes at once. Now, what you can do with five Lume Cubes depends on how you want to mount them. You get a choice of the universal 1/4-20-inch mount, magnet, suction, and more with Lume Cube’s various mount options.

The 1500 lumen Lume Cube can be adjusted via the app, which has options for dimming and even red eye reduction, among other controls. Since it’s small and water resistant, you’ll be able to put the Lume Cube in a lot of places and won’t feel weighed down with a set of them. These are meant to keep shooting fun, so Lume Cube created colored sleeves, as well.

We are pleased to award the Lume Cube as the Best Light of CES 2015.

The iRig Mic Field from IK Multimedia attaches to an iPhone, iPad or iPod Touch to turn your mobile device into an audio recorder. Combined with the iRig Recorder app, it becomes very easy to get audio at 24-bit 44.1/48kHz sampling with 115dB maximum SPL and a low-noise pre-amp. The mic is a cardioid condenser and is conducive to being carried in a pocket.

The iRig Mic Field can rotate 90-degrees for easier use in landscape or portrait orientations. It also provides you a separate gain control. All power to the iRig Mic Field comes from the iOS device, through the lightning connector in iPhone 5 and newer devices. The mic jack and price of $100 makes it very appealing to videographers that want either a secondary recording, or a fast and small audio recording option.

We are pleased to award the iRig Mic Field as the Best Mic of CES 2015.

The Other World Computing team put together the Thunderbolt 2 Dock, a packed box that should fit right in with your desk’s working equipment. The Thunderbolt 2 Dock is loaded with ports, everything from USB 3.0 to FireWire 800 to Thunderbolt 2 and Mic line in. Twelve total ports means you’re less likely to reach stumbling blocks when it comes to connecting devices. You may charge devices and power monitors and maybe even daisy chain another Thunderbolt device. Either way, this is limited to Apple computers.

We are pleased to award the OWC Thunderbolt 2 Dock a Spotlight Award at CES 2015.

When working with video, especially in post-production, devices that make a job easier are valuable, and the Lexar Professional Workflow HR2 is one of those products. The Lexar Professional Workflow HR2 added a triple microSD UHS-I option in September 2014 for transfers of up to 12 cards at once. The Thunderbolt 2 option was added in June 2014 to the already versatile USB 3.0 hub. We like backwards compatible technology and appreciate the ability to work with the original Thunderbolt and USB 2.0. Plus, having modules that are removable and become individual card readers is practically genius.

We are pleased to award the Lexar Professional Workflow HR2 a Spotlight Award at CES 2015.

Now We Wait for Shipping

Months after the show many products are not even shipping yet, but this is typical. If you’ve got an order, we know how it feels to check that tracking progress like we check our phones. We are very happy to see growth in the area of 4K cameras, the grand resolution size that is reaching more and more areas of video production. The drone industry is becoming a household topic and video going hand in hand with it. As for mics and lights, the small renditions awarded here are astounding when considering the scope of each’s history. And until we’re done using computers on a regular basis, data storage will continue to need innovation. Keep reading and we’ll continue to share the news on the best products for video production.

Jackson Wong is a marketing coordinator for Videomaker.