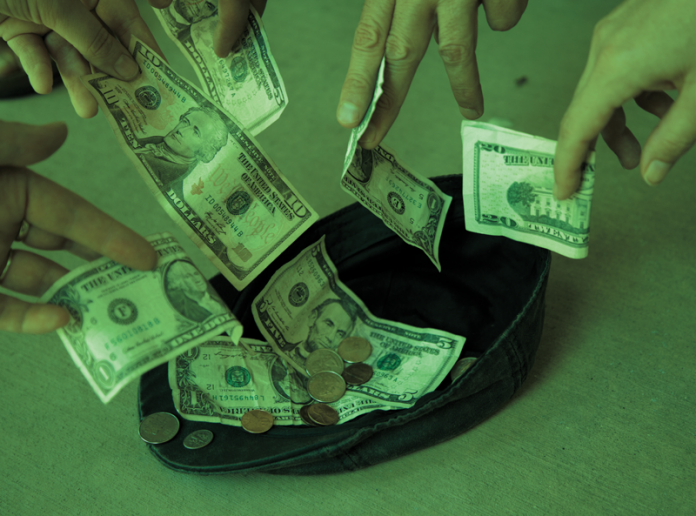 You want to make a movie, you’ve got a great idea and the vision to pull it together, but imagination just isn't enough to get you through the entire process. You need funds, and you need a lot.

Hollywood financiers make lots of money on their movie investments, but they also know that a large percentage of films never make it to a theater. Anything from a director walking off the set to labor problems and talent tantrums can stop a movie in its tracks… and all those involved in the project walk away with nothing. Of course, the financiers and studio heads don't lose, they have insurance for just such a loss, but for the producer who tried to get the movie launched, well, another heartbreak in the can. Most movie moguls don't want to touch your movie without a star name and most financiers won't bother talking to you without a studio backing, so the percentages are against the average producer.

But it doesn't have to be that way. Movie producers are fighting back and literally taking their projects to the (virtual) streets, through online funding and distribution sites.

Send in the Crowd

As a movie producer today, you're lucky to have so many alternative choices. "Power to the People" was a term coined during the 1960s to rebel against oppression, and it's a powerful phrase for producers today. You don't need "the establishment" to tell you how to produce your movie, you've got the people. Producers are side-stepping traditional avenues and looking at crowdfunding to get their movies financed.

Movie producers are taking their projects to the (virtual) streets, through online funding and distribution sites.

Crowdfunding is an open-call process that invites anyone interested to support the cause by offering funds to a project. It was only recently that the process really took off, thanks to sites like Kickstarter and Indiegogo. For instance, using social media and crowdfunding sites, many athletes were able to obtain the funds needed to get to this year’s winter Olympics in Sochi Russia, including the Jamaican Bobsled Team. Cool Runnings, the 1993 movie, made the small, two-man team famous. They qualified, but didn’t have the funds to get to the event. So they made a plea to the crowd and raised funds through several sites. Crowdfunded sites have helped launch a satellite in space and a young family raise funds for a newborn baby.

Each crowdfund site operates in a similar process: you create an account, make your own ad materials, submit your entry data and share your vision with everyone you know. Sounds simple enough, and for most of the sites, there are no fees up front, they take only a percentage of your earnings if you reach your goal. The sites don’t campaign for you, they are merely the vessel to get your project known to the world and provide the tools to create designs, market your project and set goals. All the work is up to you. Each site offers assistance on how to launch a successful campaign, and gives ideas on rewards for your backers. Once your project is successfully launched and your goal is met, you are responsible for taking the ball and running with it. Your crowdfund site has an end date, it doesn’t run continuously, but getting the backing to start a project along with the attention from many contributors might garner some attention from bigger investors later on down the road.

Movie Magic in a New Era

These funding sites have brought new life to the idea of democratizing the masses — illustrating what the internet was truly meant to be. Kickstarter and Indiegogo are the most well-known sites for video and film producers and have helped launch a filmmaker revolution with several award-winning movies in the past couple years including two Academy Award winners in 2013, the Kickstarter crowdfunded documentary, Inocente, and Indiegogo crowdfunded short, Curfew.

Indiegogo – Started in 2008, Indiegogo has a couple ways to get you funded called Flexible Funding and Fixed Funding, as well as a non-profit 501-c program. Fixed Funding works on a specified goal amount; if you don’t reach the goal you get nothing and Indiegogo doesn’t charge a fee. If you reach your goal, Indiegogo takes a four-percent cut. With a Flexible Funding campaign, any amount you raise you get to keep, regardless of if you’ve reached your goal and Indiegogo takes nine percent if you don’t reach your goal or four percent if you do.

Indiegogo was the first to offer specific campaigns for filmmakers and video producers and has just launched a new handbook written explicitly for filmmakers with tips to launching your campaign, making and meeting goals and tips from successful movie producers.

Kickstarter – Launched in April 2009 with a $1000 project and received its first million dollar project in 2012. To date, it’s helped raise more than a billion dollars to visionaries like you, for camera accessories, innovative tools, movies, music, art, games and much much more. Kickstarter takes nothing if your campaign doesn’t succeed and won’t charge those who have pledged to support you until your campaign expires and you have reached your goal. If your campaign succeeds, Kickstarter takes a five-percent cut, if it fails, no one is charged and Kickstarter doesn’t get a penny.MicroVentures – Isn’t a crowdfunding site, but a venture capital organization. It is an online service that is open to the public and connects startups with interested angel investors. It screens you on several levels of due diligence, and if you pass muster, Microventure helps find you some angels. Cost? The producer invests $100 to submit a project, then pays $250 for due diligence and 5 to 10% of total raised.Crowdtilt – Is a bit different in that small groups with small goals can benefit. Want to send grandma and grandpa on a cruise? Get family and friends to donate. Crowdtilt also helps non-profits and charges them only two percent of their take. For standard campaigns, both you and your contributors pay a 2.5% fee once your goal is reached, or “tilted” as Crowdtilt calls it.

A few other sites to look into:

Even in a Crowd, Buyer Beware

So, if you create the site, will they come? Not necessarily. Kickstarter’s site claims a 43% success rate with close to 80% of projects never reaching their goal. Then, too, what happens to the money when the funds are met or when the deadlines come across and the producers haven't fulfilled their promise? Currently, many of these "angel-investment" funds operate without regulation, but the U.S. Securities and Investment Commission has some warnings about crowdfunding. "Failing to meet obligations under the Corporations Act can lead to fines and/or a prison sentence." The concept is still new, and is currently under the microscope in both federal and state circles. In May of this year, Washington State filed the first consumer protection lawsuit against a Kickstarter fundraiser for collecting $25,000 in donations for his game of playing cards, and then not following through with his project. As in any venture, buyer beware!

Running with the Pack

Video production is often within the realm of the Lone Wolf Producer, who is usually his or her own banker, too. But if you really want to follow your passion and get that next great masterpiece funded and seen on the big screen, it's time to crawl out of the cave and get the help that's waiting for you. Check out the list of sites and resources to get your video financed, and if you see a potential project on the list, offering a few bucks to that person's project is surely good Karma for your own.

Credit for the term crowdsourcing- also written as crowd funding – is often given to Wired journalist Jeff Howe from his June 2006 article The Rise of the Crowdsourcing. Crowdfunding, crowdsourcing and angel investing are all similar terms, but with different meanings.