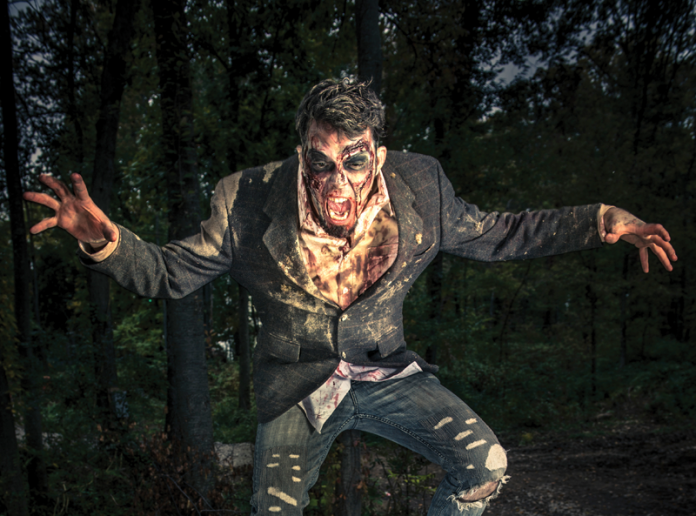 Halloween is filled with ghosts, vampires, werewolves, witches and zombies. For the video enthusiast, these creatures jump from the neighborhood trick-or-treat parade to fill the screen. Ghost? Is it double exposure, or not actually there? The transparency fools us all. Vampires? Let’s face it, you can never tell with them until it’s too late. Unless they’re the sparkly no-sunburn-type, then it’s just tragic. As for zombies, a good makeup job is always convincing on screen, but to really sell the zombie illusion on video, full on zombie combat is the way to go.

The best way to deal with zombies is to blow up their head. Let’s take a look at how to create the illusion of an exploding head without harming any of the talent. After all, they’re not real zombies, they’re just friends with extra time. This technique involves some simple rotoscoping and compositing using visual effects footage.

First, a clean plate needs to be made. The clean plate is video footage of the scene without any action or subjects moving, in essence a still image of the background. The easiest way to get usable footage for this technique is to use a tripod so the camera is untouched and not moving. Shoot the scene without any subjects in it, making sure the camera is locked down.

With the camera still locked down in the same position, shoot footage of the zombie. The actors should be cued to act out the moment when their heads will explode. Time the critical moment so an extra hand, off camera, throws some fake blood onto the zombie’s neckline and shoulders. Test this out a few times before the camera rolls and find a technique that makes a good splatter. Speed is another issue. Make sure the action happens fast, it makes the fakeness of it all a little more palatable and a lot more fun. The element of surprise is your friend here. The truth is, this is going to be fake, and that’s part of the fun of fake blood and zombie flicks.

Add Up the Layers

Now it’s time for some post-production magic. After importing both clips into your video editing application of choice, stack them one on top of the other in the timeline. Make sure the clean plate sits below the footage with the zombie.

Now it’s time for fun, the zombie is going to lose its head. Determine which frame will be the moment of zombie head destruction. Split the zombie layer at that frame. There should now be two clips of the zombie in the timeline, one prior to the head loss event and one for after the head loss. On the post-head event clip, use the video editing application’s masking tools to mask out the zombie’s head. In the visual effects world this technique is known as rotoscoping. As a result of the rotoscoping, there should be a “hole” in the top layer where the zombie’s head was and the underlying clean plate should be visible. If done correctly, there will be a headless zombie on the screen.


Add In the Explosion

Zombie heads don’t just disappear in the blink of an eye, they’re relentless undead creatures, not magical beings capable of teleportation. Find some stock footage, or create your own, of a blood and guts explosion. To create your own, blow up a balloon and fill it with fake blood. Fake blood can be made by adding red food coloring to light corn syrup, this creates a thick liquid that’s dark red in color. Set the filled balloon on the top of a stand, or suspend it from the ceiling, in front of a green screen. Let the camera roll and pop the balloon. The footage of the resulting explosion can be chromakeyed, leaving behind a gruesome mess. Cut this clip so the starting frame coincides with the moment the balloon ceases to exist and the explosion begins. Place the clip in the timeline, above all the other footage, and timed to line up with the disappearance of the zombie’s head. Make sure the position of the explosion matches up with where the zombie’s head was. When played back there should be a zombie head that suddenly explodes into a mess in front of the camera.


Don’t Just See It, Hear It Out Loud

Zombies might sneak up on you at night, not making a sound until you’re too deep in the woods to escape their horde. The audience isn’t in the woods, they can’t just see the exploding head, they have to hear it too. Find some sound effects, one for the initial explosion, one for the resulting splatter, and one for the thud of dropping zombie pieces. Place the sound effects in the timeline to coincide with the visual and your audience will feel the gut wrenching nerves of those brave souls who battle the undead for survival.

There are plenty of movie actions that are examples of “don’t try this at home.” Fortunately, exploding heads is one you can try, all because the effects wizards behind movie magic are willing to share some of their techniques with us. With a little creativity, a bit of effort, and whole lot of fun, we can capitalize on this cinematic know-how to have a happy Halloween.

The Magic of Making Movies really isn’t as “magical” as those outside of the industry believe.