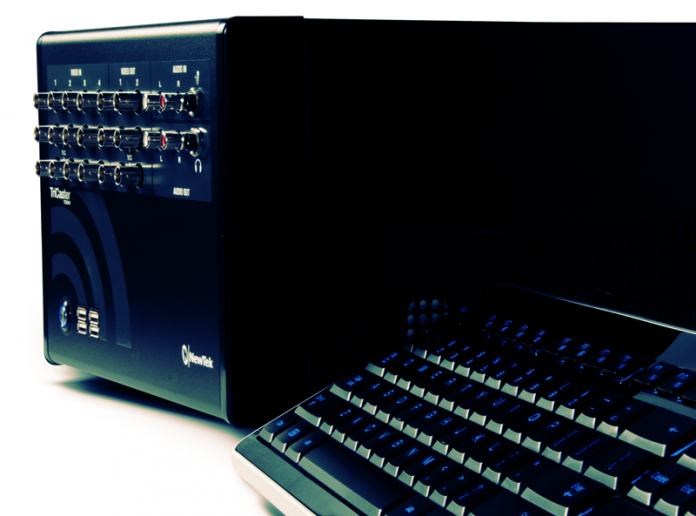 Often considered the “black box” of video production, a video I/O (input/output) device can come across as a mysterious piece of equipment. Many producers and independent video creators who don’t use an I/O device wonder what it does. The big questions are: What’s it for? Why do I need an intermediary? Doesn’t my editing computer already do this with the footage from my camera? These are all valid questions. The simplest explanation is that a video signal goes in on one side and then comes out the other in a different format.

A History of Necessity

The history of the modern video I/O device dates back to tape-based workflows. When video started to change over from being an analog medium to a digital one, there was a need to keep existing infrastructures working. Video studios and independent producers had years of investment rolled into analog equipment. Though digital video provided its advantages for producers, the costs associated with switching over to an entirely digital workflow were prohibitive for most studios and independent producers. Video I/O devices became a desired solution for taking footage from video tape, especially analog footage, and converting it into a format that could be used in a digital workflow. It provided a reversible solution as well. Producers still use video I/O devices to convert a digital signal into different formats for archiving, broadcasting and streaming. Because of this, video I/O devices remain useful in helping producers and videographers convert their footage into various formats for use in a variety of workflows and production situations.

I/O For the DSLR Videographer

There is no question that the DSLR’s ability to capture video has changed the way many videographers work and changed the type of work they produce. The large image sensors and interchangeable lenses of DSLR cameras create a video image that wasn’t possible with past video cameras in the same price range. The DSLR camera gives the independent producer the ability to create cinematic style images. One of the biggest downsides to DSLR videography is the recording format of most cameras. The majority of DSLR cameras record video as highly compressed files to memory cards. The video codecs used for DSLR compression still give the videographer a good looking file, but a DSLR compressed file, such as H.264, doesn’t hold up as well in post-production as footage recorded with a more robust production codec, such as Apple ProRes footage. For many videographers, that’s not an issue and they create beautiful videos with footage recorded to their DSLR’s solid state media. For the producer who needs greater color definition in their footage, whether they’re doing chroma key work or heavy color grading, a video I/O device provides a great solution. There is also the situation in which a videographer may have to enlist their DSLR into a live streaming environment, something DSLRs weren’t built for.

A video I/O device, when used correctly, saves time and helps to increase the technical quality of a video production.

A DSLR, with its output routed into a video I/O device is able to generate footage with less compression in the image’s chrominance. No longer is the DLSR producer limited in recording H.264 footage; they are able to record more resolute video footage to external media. Some video I/O devices, like the streaming devices made by Matrox, allow the DSLR videographer to output a signal directly for streaming online broadcasts.

DSLR cameras are known for their lack of professional audio device input. The solution used by most DSLR videographers is to record audio into a separate audio device, syncing audio and video in post-production. A video I/O device is capable of pairing an output camera signal with separate balanced audio feeds and unifying those signals into one output. This saves time in production and allows videographers to get an immediate response on their audio as it’s matched with their video.

The need for multiple audio tracks is not exclusive to DSLR production. Live events, multicam recordings and productions with multiple microphones require more than two lines of audio to get the job done. In these situations, a video I/O device does more than serve the producer’s video needs. Most I/O devices allow the producer to bring in multiple lines of balanced audio, all for simultaneous recording. This helps keep the audio in sync and can be useful for the producer who is mastering a surround sound setup. In the case of an event videographer who is pulling in a premixed audio feed from a soundboard, the video I/O device helps bring in a separate and clean audio feed.

Wedding and event videographers, as well as live video productions such as those in a house of worship, often use multiple cameras to record their events. Recording a live-switched performance through a video mixer is always an option, but if the mixer’s output is the only recording made, the production is fully dependent on the skills of the director working the mixer. Recording to multiple cameras is always an option, but the ingest and syncing of footage for a single production can consume hours of work. A video I/O device allows a videographer to simultaneously record multiple video streams directly to a hard drive. This way the camera feeds are recorded and synced. The producer can go directly from production to post-production, without the hassle of ingest.

A videographer’s hard drive isn’t the only place a video I/O device will output to. Live webcasts are becoming more popular. Corporations are using them for sales training and corporate meetings across multiple locations. Educational institutions are streaming classes across multiple campuses. Webcasting video is growing. Finding a camera that records a file with H.264 compression isn’t a problem, but finding one that outputs a streaming H.264 signal is a little more difficult. There are dedicated video I/O devices that will take a camera’s output video signal and convert it into a streaming H.264 signal. This helps the videographer use their professional grade gear and keeps the webcast from having to resort to lesser quality webcams.

Finding and selecting the right video I/O device might be the most difficult task in using one. Many are specialized to handle a specific range of tasks. Some are general workhorses, built to take in a wide array of inputs and kick out a variety of outputs. There are video I/O devices built for field use, while others are made to be rack-mounted in a studio.

The three big manufacturer’s of video I/O devices are Aja, Blackmagic Design and Matrox. Each has a longstanding tradition of making quality devices that work with the most popular video editing programs.

Benefits to Using an I/O Device, Even if Your Camera Shoots to a Memory Card

Cameras are limited to very few formats when recording to a memory card. Sure, the footage can be transcoded once it’s ingested into a post-production workflow, but what was lost in the initial recording can never be regained through transcoding. An I/O device grants the videographer a wider range of options for recording.

The use of an I/O device during production not only gives the videographer more options, but it gives them better options. Videographers using an I/O device to record to external media have the luxury of recording larger video files, ones with less compression and greater definition within their image, especially in the chrominance. More can be done with a 4:2:2 image than the same setup recorded at 4:1:0.

Memory cards are convenient because of their small size and portability, but they’re not always reliable. Any producer who’s dealt with a corrupt card before it was transferred knows the pain of lost footage. Recording to external media means the videographer can record directly to a redundant drive. This means there’s much less chance of losing the footage that took a lot of work to capture.

Long video shoots are interrupted by card-changing camera operators. Post-production usually kicks off with the transfer and backup of memory cards to a reliable redundant drive. Both of these tasks add time to a video production. Add it up over a year and it can be hours, if not days worth of time. Recording through an I/O device to external media can circumvent both these processes and save time in the long run.