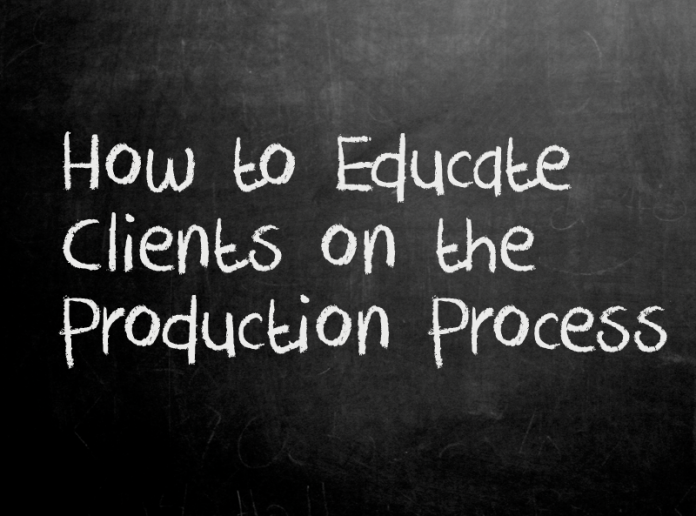 If you’ve hung out your shingle as a video production entrepreneur then you’ll have developed some appreciation for the one skill they didn’t teach you in film school: client management.

It goes without saying that the client-producer relationship is critical to the success of any video project. But how do you deal with a client who wants all the bells and whistles, but is reluctant to pay for what the work is actually worth? What do you do when, after a project has been completed and approved, the client decides she wants revisions?

We surveyed online discussion groups where video professionals hang out and asked producers for some dos and don’ts about what it takes to deliver on client expectations. From lone wolf independents to in-house staff producers, they all came back to one theme, client education. The advice we got was, “Be open with clients about how video production works and be frank about what it costs.”

“I can't overemphasize the importance of educating clients about the conceptual, creative and content development process. They simply don't understand how much goes on in the pre-production process before you even think about taking the camera out of the case.” — Tom Dudzinski, owner-producer Renaissance Media, Denver, CO

Like everything in media creation the producer-client relationship starts in pre-production. Your first client meeting is a fact-finding mission where the information flows both ways. You want to know what the client wants and your client wants to know whether you can deliver and, if so, when, and for how much.

Linda McIntyre, executive producer with Vancouver-based Per Ardua Productions, underlines the importance of clarity from the outset: “Right in the first client meeting, I always ask them to describe their vision,” she says. “I need to know what pictures they have in their head, and why they want the video, who their audience is and where they are going to use it, because that all speaks directly to the production budget.”

Be open with clients about how video production works and be frank about what it costs.

One useful pre-production tool is sometimes referred to as the Production Initiator. Here’s how it works: interview the client during your first meeting about the focus of the video, its objectives and desired outcomes, who the audience is and where they will likely be watching it. Fashion the responses into a proposal document that reflects back to the client and confirms, in an itemized summary, the scope and expectations of the video project.

Donna Downey, who manages in-house production at Memorial University of Newfoundland, asks clients to show her a reference video. “Because all video is so widely accessible via YouTube, Vimeo, etc., it is now common practice for me to ask clients to show me samples of the style of video they are envisioning. It is most amazing how different the videos they show me compare to the videos they describe in the initial request.”

Once you’ve reflected the client’s vision back to him in a Production Initiator document or a production brief, then comes the tricky part: getting the right decision-maker in your client’s organization to sign off on it.

Denver-based producer Tom Dudzinski shared this cautionary tale, “I once had approvals all the way through production. Then when the revision on the first rough cut was kicked up the food chain to the VP level, someone (who hadn't been involved in the process until that point) had a problem with the basic premise of the treatment and we had to do a very expensive re-shoot. The single point of contact and approval is key, and write that into the contract!”

Although some clients will know their way around video production, having managed many projects before yours, some will never have contracted a media project. Be prepared to hold their hand through the production process.

One way to facilitate a productive client-producer partnership is to share your production schedule and establish production milestones. Then have the client sign off as each milestone is reached. Final draft of script, principal photography, rough assembly, off-line edit and on-line edit are typical production milestones. Signing off on all phases of production gives your client ownership of their video project and ensures there are no surprises.

Drawing up a standard deal memo that includes a scope of work section is good business practice, according to producer/director Terry O’Brien, who is with Ocatillo Pictures in Temecula, CA. “My deal memo is based upon AICP guidelines (The Association of Independent Commercial Producers),” says O’Brien. “I figured that better folks than me had hammered out agreements with huge ad agencies. It seemed a good place to start.”

“I usually give them more than what they paid for. In the end, it's my name and reputation attached to the final product. I'll scale back and compromise, but I won't deliver something I can't stand by.” Mark Wilcken, an independent producer in Little Rock, Arkansas.

Belinda Shaw is an executive producer with Beads Communication in Capetown, South Africa. This is her advice: “When presenting the budget don't try and hide big costs. Be open and honest and explain the extra value these items add. Then take the client through each line item and explain in detail.”

“Sharing budget details,” she says. “Helps bring down expectations and allows the client to understand the complexity, the process and costs of even small productions. Remember, production jargon to us is gobble-de-gook to a client, so keep the language simple.”

Some producers we surveyed thought it a good idea to invite clients to the shoot. This can be more than a courtesy and team building exercise because client reps can provide invaluable insight as “brand managers” on location and in the studio.

However, when it comes to the edit suite, the producers we surveyed agreed that it’s wise to be prudent when sending out client invites. Belinda Shaw has some sound advice for managing clients during post-production, “Do not let them sit in on the rough edit. You need the space to make your creative decisions. They can comment on it once you've got a rough edit done.”

But Shaw recommends not showing clients an edit that’s too rough. “Definitely try and include voice guide tracks, some music and sound effects before showing the rough edit as clients often cannot make that perceptual leap to the value a final mix brings to the overall polish of a production. Even on the rough edit, make sure your levels aren’t all over the place. It’s all they hear and it’s what they'll hone in on.”

Another recurring challenge cited by producers was when clients request revision after revision during editing. San Diego writer/director Philip Ireland’s company e-Motion Web Video has a process for avoiding revision hell.
“Included in our project pricing, I provide three rounds of editing to give clients the opportunity to tweak the video in the final stages. And I make it clear that additional edits will be subject to additional costs.” Ireland makes sure that feedback from all influencers on the project are included during the revision process, “So that the project manager can then create a master change list.”

Make sure that you and your client have agreed on exactly what the final deliverables are on project completion. Will you be handing over raw files? H.264 files for YouTube? DVDs? ProRes files? QuickTime movies? All of the above?

As video production technology and delivery systems have evolved, so have the roles and responsibilities of the producer.

Gone are the days of holding an audience captive in a dark room and making them watch a boring, self-promoting company video. Business video in today’s knowledge economy is beamed across social media networks, and video content doesn’t focus so much on corporate chest thumping as it does on solving business problems.

In a world where corporate video is made mostly for the web, video producers have become media consultants offering a range of extended services and expertise from interactive content creation to video marketing. Producers are stepping up to educate organizational and corporate clients about the power of video and how it can add value to their brands and mandates.

This is indeed a golden era for informational video producers.

The landscape of informational video production is unrecognizable from what it was only a few years ago. Producers have had to grow extra tentacles to better multitask in a world of interactive multi-media.

Although the basic role of the video producer hasn’t changed — find the client, hire the crew and manage the project — producers operating in the digital age not only know how to create visual media content, but they also know how to manage its delivery and distribution across online platforms. Producers with video marketing and social media savvy are converting these value-added skills into extensions of their production services.

Steven Curtis is an independent producer in Upland, Indiana, who offers web hosting services to his clients and helps them set up and manage their own video channels online. “These are mostly easy and inexpensive services to tag on to the end of the product that makes it more desirable. Also, clients see the end value of what you're really doing,” says Curtis. “Anticipating their needs ahead of time adds credibility to what you're doing because it says loudly, ‘Hey, I've done this before.”