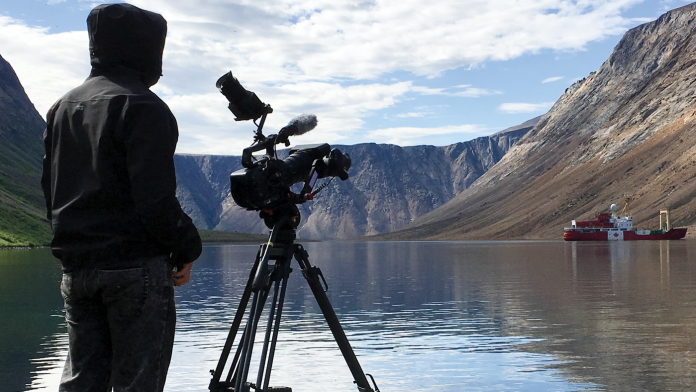 The Metro Toronto Convention Centre is buzzing with visitors eagerly crowding around product booths, where exhibitors are demonstrating the latest gear at Profusion 2017–the highly anticipated imaging technology show held here in November.

On the main stage of the Sony booth, three adventure filmmakers Peter Wall, Garry Tutte and Ryan Rizzo are presenting a show and tell. Their slideshow sparkles with stunning images of pristine natural settings, icebergs and polar bears and awe-inspiring landscapes. The filmmakers take turns at the mic walking a rapt audience through the process of how they captured the stories and images during such an epic and unprecedented expedition Ã¢ÂÂ Canada C3.

Wall, a former TV journalist, was hired in 2016 as lead producer to put together a communications team for the C3 signature project in celebration of CanadaÃ¢ÂÂs 150th birthday. From June to October, Wall led a team of shooters, producers and drone technicians who filmed, edited and published content from an icebreaker sailing from Toronto, Ontario to Victoria, British Columbia via the Northwest Passage.

The 14,000 mile voyage took place over 15 legs and was christened Canada C3 for its mandate to connect Canadians from coast to coast to coast, to share the stories of coastal communities with the rest of the country and indeed with the world via Facebook, one of the expeditionÃ¢ÂÂs sponsors.

The 14,000 mile voyage took place over 15 legs and was christened Canada C3 for its mandate to connect Canadians from coast to coast to coast…

The expedition was conceived, founded and led by Geoff Green, an internationally decorated explorer with more than a hundred polar expeditions under his belt. Green is the founder of Students On Ice, a non-profit foundation that brings young people together with educators and explorers from around the world and takes them on once-in-a-lifetime polar expeditions. The intrepid adventurer and social entrepreneur has been described by Canadian media as Ã¢ÂÂthe man who revolutionized polar and environmental education.Ã¢ÂÂ

The mission for Wall and his communications team on C3 was to produce content across a variety of platforms that focused on four themes: diversity and inclusion, youth engagement, the environment and reconciliation Ã¢ÂÂ building new relationships with Indigenous communities.

Ã¢ÂÂWe were told that we had to reach 20 million Canadians,Ã¢ÂÂ said Wall whose first task was to secure on-board internet connectivity over the course of the voyage. Technical supervisor Rizzo helped outfit the Polar Prince, a former Canadian Coast Guard icebreaker built in 1958, with state-of-the-art satellite technology.

Ã¢ÂÂThe geostationary satellite is right above L.A. 36,000 kilometers away,Ã¢ÂÂ says Wall. Ã¢ÂÂThe further north east you go, the lower on the horizon the satellite gets. With this amazing technology, we still had a connection even in the Baffin-Davis straight, with the ship moving and rolling and the satellite elevation barely above the horizon. That allowed us to do a lot of live production.Ã¢ÂÂ

Ã¢ÂÂWhen we were putting the team together, thatÃ¢ÂÂs what we were looking for. We looked at everyoneÃ¢ÂÂs reel and we had to be moved by what they shot, and that they not only had a real strong visual aesthetic, but also a powerful storytelling ability.Ã¢ÂÂ

Wall says his co-leads Rizzo (drone media supervisor, lead tech) and Tutte (producer, director, DOP, and drone pilot) brought all that and much more to the project.

GreenÃ¢ÂÂs concept was that for each leg a new group of participants be brought on-board including scientists, artists, youth, Indigenous Elders and educators. A programming team set out a schedule of events and activities for each leg well in advance of the shipÃ¢ÂÂs next port of call.

Ã¢ÂÂSo, we had the schedule that we would work from,Ã¢ÂÂ says Tutte. Ã¢ÂÂBut we didnÃ¢ÂÂt necessarily know if something was going to be a great story or whether somebody was going to be a good talker or even whether they would be open to being filmed. There was a lot of on the fly storytelling and decision making.Ã¢ÂÂ

Wall shares one example where on-the-spot judgment calls were needed to pull off a story in Powell River on the Sunshine Coast of British Columbia, the traditional territory of the Tla’amin Nation.

Ã¢ÂÂWe knew there was an interesting story about a Reconciliation project between Indigenous and Non-Indigenous members of the community and that they were building a dugout canoe in the traditional way,Ã¢ÂÂ says Wall. Ã¢ÂÂSo we got off the ship and right away I knew it was very visual. It was just a nice story.Ã¢ÂÂ

But when shooting started, Wall realized he only had a couple of hours to shoot the item.

Ã¢ÂÂI had another shooter on the ship who was editing a different piece, so I radioed him and asked him to do second camera, and we started shooting interviews,Ã¢ÂÂ says Wall. Ã¢ÂÂThe other shooter got most of the cover shots and grabbed a photographer so they could do interviews with other people while Ryan and another drone pilot were getting aerials. So within a period of three hours we shot four interviews, all the visuals that we needed, and in a day and a half we put together a four or five minute piece. And we did an Instagram story while we were there as well.Ã¢ÂÂ

Sometimes this kind of story chasing would happen twice a day, on one location in the morning and another in the afternoon. Ã¢ÂÂIt was somewhere between documentary production and news,Ã¢ÂÂ says Tutte.

On the Sony stage Rizzo, is showing slides of crews at work pictured against magnificent coastal scenery, while Tutte and Wall explain how they managed rotating crews. For each leg, the onboard team included two stills photographers, two videographers, one drone/media tech, an editor and sometimes an extra shooter. The crew of operators were onboard from two weeks to a month or for two to four legs.

Ã¢ÂÂThis meant that the team was constantly changing and constantly adapting–having to learn to work with each other,Ã¢ÂÂ says Wall.