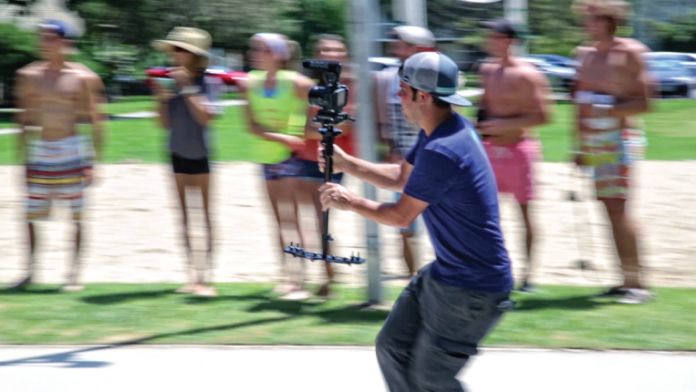 The XC10 doesn’t look like your typical DSLR or 4K camera. It is about half the size of Canon’s C300 Mark II and weighs less than many of Canon’s current line of DSLRs. The XC10 records in full 4K (3840 x 2160) and HD (1920 x 1080) on CFast and SD cards respectively. On the back is a touchscreen variable angle LCD monitor, as well as a right sided rotating hand grip making it easy to get low and dynamic angles.

Who better to get their thoughts on a unique 4K camera than independent filmmaker Devin Graham — more popularly known as DevinSuperTramp online?

Devin Graham has produced more than 50 4K films and counting. He continues to add to his gallery of hundreds of films, using everything from Canon’s series of DSLRs to a variety of RED series cameras. He is known for bringing high production value to his videos and taking stories and cameras to the extreme.

“Ever since I was a little kid, I was borrowing my parents’ cameras to get the shot that no one else could… That resulted with several cameras busted … I have continued this passion ever since! There was never any other option, it was destiny, true love,” says Graham.

We spoke with Graham about his experience shooting with the Canon XC10. He shares with us his thoughts about the XC10; what’s unique about the camera and who he thinks will get the most out of it.

Graham and his team are using Canon’s XC10 on an upcoming project that he describes as, “An action comedy about how life would be in(side) a gigantic bubble, doing sports.” If you’re familiar with Graham’s work, you know that this isn’t going to be your average action comedy short.

“We got it right into the action. We did a lot of low shots, where we could flip the screen to see the image we are capturing. We also do all our films in 4K, so it was good to have that capability,” Graham says.

From the venerable 5D Mark II to RED’s Dragon that shoots 6K, Graham has experience with multiple camera types. When asked how the Canon XC10 stacks up to the other camera’s he has worked with, he says, “I would say it stacks up pretty well to the 5D, except it shoots in 4K; it handles a lot like a DSLR.”

Users will find some familiarity with the functions and controls of the Canon XC10, as well. Graham mentions many of the controls and handling of the camera are similar to the previous Canon cameras. He says, “Like, I can give it to my mom to shoot me doing something and she would be able to figure it out.”

Graham also notes that the battery life on the XC10 is impressive: “The battery life is amazing. I like that it allows me to hike three miles and not have to carry a bunch of batteries with me.” Canon states that, depending on the recording format, shooting either 4K or full HD, the maximum battery life for the XC10 is approximately two hours. When you shoot as many action sports as Graham does, often in far off exotic locations, it’s good to have that convenience.

“Since [the XC10] is so small, I feel you can get away with a lot more without grabbing people’s attention”

One feature that stands out about the Canon XC10 is that it comes with a 10X f/2.8-5.6 fixed zoom lens. If you’re used to working with interchangeable lenses, there may be a bit of a learning curve. “It took me awhile to get used to,” Graham states. He continues in saying that he, “loved the fact that I could zoom from 24mm to 240mm, but still a totally different world than what I am used to, since I’ve always worked with (interchangeable) lenses.”

Another distinguishing feature of the XC10 is its size and weight. The camera is 4.9 x 4 x 4.8 inches all around and weighs in at 2.3 pounds, even when loaded with battery and memory cards. Graham commends the camera’s ability to be, “… light weight and give you a lot. I’m an independent filmmaker so I love being able to take it into places where they say, ‘you can’t bring your big camera and camera equipment in here.’ It’s super light weight and a easy to get into tight places.” The XC10’s weight also makes it a candidate for drone shoots, something that Graham expressed eagerness to test out.

In addition to shooting full HD and 4K, the Canon XC10 also has some pretty impressive photo capabilities. On top of being able to take 8MP photos while in video mode and 12MP pictures in photo mode, you have the ability to screen-grab still images within the camera. During playback, users can watch the footage they just shot, pause the video on the frame they want to take a picture of, then save the image directly to the SD card. Not only that, but because the XC10 comes with built in Wifi, users can send the photos directly to their computers before the footage is even logged.

We asked Graham who he sees using the XC10, considering its unique form factor and the other cameras currently on the market. Graham says he recommends it for “… Indie filmmakers who want to get started with a 4K camera… like I said, a lot of the controls and functions are the same as other Canon cameras so it’s pretty intuitive.” He continues to say, “It’s an awesome camera for people just getting into film. For people that have to film on a low profile and not call attention to themselves. Since it is so small, I feel you can get away with a lot more without grabbing peoples attention.”

Canon made a huge splash with their introduction of the EOS 5D Mark II in 2008, but time will tell whether the XC10 will manage to appeal to brand loyalists, considering the lack of interchangeable lenses. Devin Graham believes, however, that Canon has created a very dynamic lightweight 4K camera that handles very much like a DSLR.
Much like Canon, we’re curious to hear your thoughts on how this camera fits into your production. Do you see this camera playing a role in your next production?

Ricky Anderson II is a Texas-based video producer and entertainer.