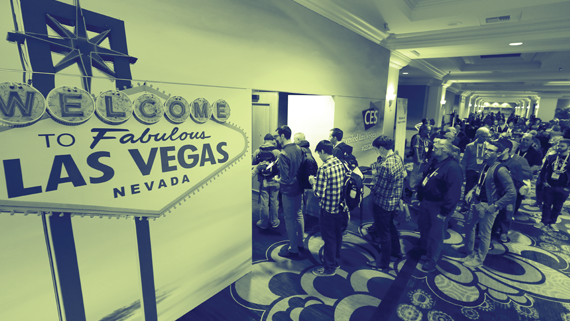 This year's CES had more than 3,600 exhibitors set up on over two million square feet of exhibit space. With a show this large reflecting almost every avenue of cutting edge technology and its consumer applications, it can be difficult to distinguish the trends from the fads. Here's what Videomaker learned at CES this year.

Major brands like Sony, Panasonic and GoPro all displayed 4K video cameras that retailed for under $1,000. The selection wasn't just limited to action cameras; 4K point and shoot and camcorder models are also now available at an affordable price point. With the prices of high quality consumer 4K cameras dropping, it won’t be long before prosumer and professional 4K video equipment follows suit.

One of the things that has made 4K post-production harder is that most computer monitors lacked native resolutions higher than 1920 x 1080 HD. A multitude of new 4K computer monitors were on display at CES. Now even more affordable, display prices are decreasing with 4K monitors available for under $600.

Dell and HP were also showing off their new 5K monitors which are great for increasing your editing workspace. With great Adobe RGB color reproduction, these monitors will definitely aid your 4K post-production. While the Dell model is a bit more expensive, HP's model will release in March for under $1300.

All of the majors as well as companies you've never heard of had prototypes of 8K TVs on display at this year's CES. This could prompt the camera companies to push for higher resolutions in the next few years. Now is definitely the time to start saving for that 4K camera.

While 4K TVs are nothing new, Roku showed off its upcoming 4K enabled units and Dish Network announced the upcoming release of the industry's first 4K set top box. Dish plans to release the new unit in Q2 of 2015 and will be offering 4K content. Content in 4K from the satellite and cable TV providers is the biggest step toward getting 4K TVs into peoples homes. Netflix, Amazon and YouTube have all started releasing 4K content, which is raising consumer interest in the format. Of course, affordable 4K consumer cameras, as well as 4K cameras on cell phones are also helping with awareness. Once people own 4K TVs, they'll expect new video content to be produced in 4K, creating a demand for 4K content. Now's the time to be ahead of the change in technology rather than playing catch up later.

The biggest trend in monitors after 4K or higher resolutions was curved monitors. For larger monitors — 23 inches and over — the curved shape is a great feature that allows you to more easily see the edges of the screen. Consumers appeared to be drawn to the fashionable, sexy shape of the curved TV screens, which could also increase the demand for larger, higher resolution displays even in small living rooms.

If you want to know the upcoming technology trends and how they can improve your business, the CES exhibition floor is a great place to see what’s new.

For the video professional, curved monitors can be especially useful for previewing or post-production with multiple monitor setups, which tend to be very wide. For monitors that are brought into the field, the curved shape may not be practical since it takes up a bit more space than a flat monitor when packed; also, a curved monitor can be harder to see from off center of the display as the curve can hide part of the screen.

The 3D fascination continues to fade.

There just wasn't a lot of interest in 3D on the CES show floor. It was hard to find a TV or monitor that was being hyped for its 3D capabilities, even though a closer look at the specifications on many models often revealed that the units on display were 3D-enabled. Theatrically, there's still a demand for movies in 3D. With these movies continuing to release in 3D on Blu-ray, it's not the end of the format, but until some of the glasses-free 3D TVs make their way from prototypes to people's living rooms, it's unlikely that we'll see an increase in popularity in 3D.

Virtual Reality (VR) head gear was displayed all over the show floor. From units that let you strap a smart phone to your face to models built for VR from the ground up, like those from Razor and Oculus, interest was high and prices were affordable. While VR shows great promise for gaming and animation, its future for live action video isn't quite as clear. VR camera rigs are typically very complex and require a multitude of cameras. Post-production for VR is equally challenging. The biggest problem for all VR production at this point is the lack of format standards. Razor has done their part by making their software open source; however, until some format standards for production and post take hold, it's not likely that live action VR videos will be in great demand.

Attack of the Drones

The FAA's restriction on the commercial use of drones in the U.S. doesn't seem to bother most manufacturers. There was an abundance of drones at CES in a variety of sizes and prices. Some had built in cameras and some simply allowed you to attach your own. While the legal use of drones may remain questionable, their availability doesn't.

As consumers are being made aware of their uses and benefits, some wedding videographers are now getting asked for flyover shots as part of the video package. While many professionals are taking the approach of “shoot now, pay the fine if caught later,” there are currently no FAA restrictions on hobbyists using drones for photography or video. If you're looking for a fun toy, get a drone.

LED lighting technology continues to advance as evidenced by the new lights shown at CES this year. In addition to a huge host of consumer smart bulbs for the home, Lowel unveiled their new professional grade LED lights for photo and video work. Lowel's new models include LED panels and fresnels that are very similar to their non LED predecessors, allowing use of traditional filters and diffusers. A three light kit available in either daylight or tungsten instruments includes stands and a rugged travel case that retails for just more than $2000.

On the indie side, the Lume Cube was the hidden gem on the CES floor. The tiny light that just released is smaller than an action camera and includes a built-in battery. Fully iOS or Android controllable via Bluetooth, the lights are modular; you can control up to five units at once. With a retail price of less than $80, the Lume Cube is the sign of things to come in LED lighting. This is one of the first lights of its type, and we hope to see many more.

The Connected Home and Office

For consumers constantly on the go, there were many products displayed to connect the systems we live and work in to the web for easy remote access. From heating and cooling thermostats to door locks to lights to appliances, the list of connected devices and the apps and systems that control them seems to go on endlessly. While these systems can add to our comfort and convenience, there is not a lot of talk about their security. As the recent hack of Sony Pictures has shown us, it's not always wise to have all of our support systems online and vulnerable to hacks. If you decide to connect your home or office, remember the photographic and video assets that may be on your computers; you'll need to find a balance between convenience and security that works for you.

While Toshiba, Alienware (Dell) and HP showcased their latest laptops with 4K resolution displays, one of the most exciting new products was Alienware's proprietary break-out box for their laptops. The box allows you to drop in your choice of an AMD or NVIDIA desktop video card; when the box is connected to your laptop, it greatly increases your power to render video. Intelligently designed to bypass the size and cost prohibitions of adding a video card internally, it allows you to use the laptop on the run in the field without the break-out box but gives you the power you want and need for post-production work at home.

LaCie showed off their new Rugged RAID 4TB two hard drive unit. With protection in a tough case and options for RAID 0 for speed or RAID 1 for data protection, the unit is great for field use; hopefully, it's a sign of more affordable, portable RAID boxes to come.

Seagate has a new media player that is available in a two-drive RAID model with up to 8TB of storage. Media professionals have been using consumer media players to preview and playback files for a while now, but Seagate's Personal Cloud Home Media Storage offers the streaming and app control features of traditional players with the fault protection of RAID 1.

While a great sale on HD equipment may be tempting, trends from CES 2015 suggest a better investment may be in 4K gear. As 4K technology grows and expands, prices on 4K gear for production and post will continue to drop as manufacturers try to be competitive and the gear becomes more prevalent. 3D may be on a down trend, but drones are on the rise. Overall, there’s a lot of exciting new gear out there to help you with your projects.

Cars of The Future and Their Value For Videographers

The driverless car had huge buzz at CES 2015 with many car manufacturers having prototype models on the show floor. While at first glance, this vehicle seems far fetched — like something out of a science fiction movie — testing has indicated the computers are better drivers than people; furthermore, several states have already passed legislation that allows conditional use of driverless vehicles on private, closed circuit roads. Auto manufacturers are pushing this trend, and you will probably see consumer availability in the next five to 10 years. For the photographer and videographer, using a driverless car for your production videos will allow you the freedom and ability to shoot from your car without dragging along a designated driver.

On the other end of the spectrum, Elio Motors was at CES showcasing their new economy vehicle, which also looks like a design from a Sci-Fi movie. The slim-line, tandem-styled two seater is gas powered. Made in the USA, the Elio boasts 84 MPG and will retail for $6800 after its release scheduled for the end of this year. This is a great, efficient production vehicle and awesome advertising platform all-in-one. The design of the vehicle is guaranteed to get looks; add removable magnetic signs advertising your business or a custom wrap, and you'll be the talk of the town.