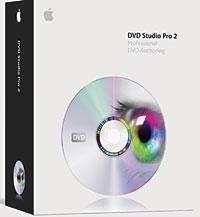 DVD Studio Pro 2 has been completely rewritten for Mac OS X, and features a new user interface. Professionally-designed, customizable templates are part of the mix, along with timeline-based editing and Compressor, a new software MPEG-2 encoder that provides more control over encoding. Transcoding can now take place in the background, yielding results faster. DVD Studio Pro 2 will be available in August, and as a result of new, lower Dolby Digital royalties, at a new lower price of $499.

JVC Pro demonstrated their new JY-HD10U high-definition single-chip Mini DV camcorder. Like its consumer cousin (the GR-HD1) the HD10U can record in both standard DV as well as high-definition using MPEG-2 compression, supporting SD at 480/60 in both progressive and interlaced modes, as well as HD at 720/30p. The unit has both component video and FireWire outputs. According to a CineForm representative, an Adobe Premiere upgrade scheduled for later this year will enable it to edit HD video in real time. The HD10U is scheduled to ship in July and will be available for $4,000.

A prelude to a tapeless world of video acquisition was another highlight of Panasonic’s NAB offerings. The company showed a prototype SD card camcorder, which can record eighteen minutes of video on an array of four 1GB SD cards housed in a standard PCMCIA card, which can be inserted straight into a PCMCIA slot, most commonly found on laptop computers. Storage will increase as larger format SD cards become available and one camera will have multiple hot-swappable slots.

Canopus showed its new Edius editing software package features unlimited audio and video tracks, unlimited graphics and title layers, transitions between multiple video tracks, format conversion capabilities and realtime output. The interface is optimized for dual-monitor systems and includes time code and audio level overlay displays, as well as waveform monitor and vectorscope displays. Edius provides 27 real-time video filters and real-time titling with multiple layers. At press time, Edius was slated to ship in May, and will be available for an introductory price of $299 until August 31, when it assumes its full retail price of $599.

Canopus also demonstrated ProCoder 1.5, a new version of its emerging video encoding software. Version 1.5 adds support for Windows Media 9 and can now import Macromedia Flash movies. Advanced QuickTime features are now supported as well, including the capability to load source material in its original color spaces. ProCoder 1.5 is now shipping and retails for $699. Registered users of ProCoder can upgrade via a free download available at www.canopus.com.

Ulead has bundled MediaStudio Pro 7, DVD Workshop AC3, COOL 3D Studio and PhotoImpact 8 on a single DVD-ROM. The resulting product, StudioQuartet, is a complete multimedia creation package for still image editing, video editing, 3D text and titles and DVD authoring and is expected to be released June 1. Further sweetening the deal, StudioQuartet will also come with a royalty-free content library. A unified online help system will also be included. StudioQuartet will debut at an introductory price of $795, and assumes its full price of $895 on August 30.

Boris RED Gets an OpenGL Upgrade with RED 3GL

According to founder Boris Yamnitsky, "The extra memory on the VGA card is key" to increased performance. The software also includes a chart creator, which generates animated 3D charts from info in Microsoft Excel spreadsheets. Boris RED 3GL plugs into many popular editing packages. Boris RED 3GL is slated to ship June 1, and will be available for $1,595. Owners of Boris FX, Graffiti or Calligraphy can upgrade to RED 3GL for $999, and owners of previous versions of Boris RED can upgrade to RED 3GL for $295.

Bella Corporation introduced a new series of video-centric keyboards with built-in jog/shuttle controllers. The $100 Optima version comes with a sticker set to help the user navigate popular editing applications more quickly and efficiently with important shortcuts. (Additional sticker sets will be available for purchase from the company’s Web site.)

The $169 Professional series combines the jog/shuttle with the color-coded shortcut keys found on the company’s EZ Keyboard. Shipments were expected to begin in mid-May.

The successors to the ever-popular USB Instant DVD, these newest models take advantage of the latest USB 2.0 and FireWire connectivity for even more powerful yet simple video capture and conversion. Instant DVD 2.0 and Instant DVD+DV offer the fastest and simplest way to get movies from video tape to CD or DVD disk, using simple-to-follow steps to get started capturing and publishing video – even allowing users to capture straight to disk in one simple step. In addition, the products include video editing and DVD authoring tools that let users unleash their creative talents with professional video editing and special effects. Instant DVD+DV takes things a step further by offering direct DV to MPEG 2 conversion (skipping analog altogether) for the highest video quality possible. Simply take the DV camera’s FireWire connection directly to the Instant DVD+DV box and capture in full digital quality. For added convenience, this model also allows for full device control of the camcorder from your computer – making video production smooth and seamless.