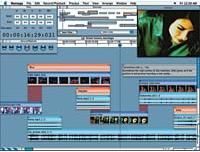 Arboretum Systems, best known for audio software on the Macintosh, introduces Montage, their first video editing software package. Montage is the first editor to discard the traditional track metaphor in favor of a trackless workspace that allows users to freely arrange clips to create projects.


The program will run on a G4-based Mac with 128MB of RAM, and requires Mac OS X 10.2 or later. The software will be available in the 1st quarter at an introductory price of $99. A trial version will be made available at www.arboretum.com.