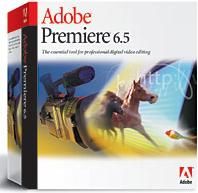 Adobe Premiere, the digital video editing software of choice for many prosumers, has undergone a major upgrade, resulting in its new incarnation, Premiere 6.5.

At the top of the new-tool list is the introduction of real-time capabilities, designed to give users instant previews of effects, titles and transitions. Premiere 6.5 also touts a new MPEG-2 encoder intended for DVD authoring, in addition to its MPEG-1 export options.

Version 6.5 also includes the unveiling of the Adobe Designer Titler, which leverages Adobe’s expertise in typography and replaces Pinnacle’s TitleDeko, which used to be bundled with Premiere.

Targeted to casual camcorder users as well as those who create video footage with digital still cameras, VideoMagic users can simply load their video clips onto a basic timeline, add some background music (none is supplied), pick one of 24 movie styles and click "Save Video." The program automatically analyzes the footage for color, texture, motion and human faces, then auto-edits them to the tempo and rhythm of the audio. VideoMagic has the potential to introduce a large segment of the population who dabble with digital media, to making their own video projects.

VideoMagic represents the first rung on the video-editing ladder and for $50, it’s a worthy instant-video tool for parties and other informal events. You can download a free trial version at www.acdsystems.com.

The big news here is two-fold: Sony’s new DCR-IP220 (MSRP $2,000, pictured) will be the world’s first 2.1 megapixel CCD camcorder, capable of capturing stills at 1600×1200 dpi. And second, in addition to the included Movie Shaker, Sony will offer EZEditor, a $100 optional video editing kit expected to feature a version of Pinnacle’s Studio 8 that can read and work with MICROMV data.

The two camcorders are slated to include USB streaming capabilities, new for MICROMV, and each will have a PDA-like stylus for its Touch Panel LCD hidden in the wrist-strap.

Also new for MICROMV (which is not a Sony proprietary format, although Sony is the only company to utilize it so far), will be 64KB of memory incorporated into its tapes, giving users a thumbnail search function and index titler. Sony will also offer $199 optional Bluetooth adapters to go along with these network-capable camcorders.

Sony said EZEditor should ship in mid-September and the cams in early October.

Adding to its line of stand-alone video editing appliances that includes the Kron and the Avio, MacroSystem US recently announced the Prestige, an editor that comes with an 80GB removable drive in a slide-out carrier.

At $500 less than the Kron, the Prestige (MSRP $3,495) includes the newly designed Smart Edit 2.0, which the company says retains the Casablanca’s renowned simplicity while increasing its capabilities. The Prestige, like the Kron, comes with a built-in DVD recorder and Arabesk authoring software with the DVD Dicon (direct conversion) acceleration system. The unit can also read CDs, the only Casablanca editor that can make that claim. The Prestige will have easily accessible front inputs for FireWire, audio, video and microphones, as well as rear-panel inputs and outputs, including FireWire, S-video and component.

With a processor in the 1GHz-range, the Prestige is by far the fastest processor ever offered in a Casablanca system. The Casablance Prestige should be available by the end of September, and MacroSystem will offer “loyalty” pricing for those existing Casablanca owners interested in upgrading.