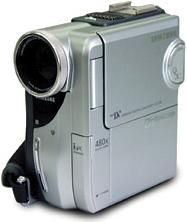 Samsung Electronics recently introduced four new camcorders, including the pocket-sized SC-D590 Mini DV unit (pictured). Claiming the title of smallest upright Mini DV available in the world, at least for the time being, the SC-D590 (MSRP $1,199) measures in at 3.74 inches by 1.6 inches by 3.7 inches.


The miniscule model is equipped with a 680,000-pixel CCD, 10x optical zoom, 2.5-inch LCD and Nite Pix feature for shooting in the dark. The compact cam also supports Memory Stick removable storage for still images. In addition, it includes a Smart Shoe for an external flash as well as FireWire and USB connections for video and image transfers. The SC-D86 Mini DV cam (MSRP $699) offers similar features on a roomier chassis.

Software Architects Inc.’s WriteDVD! Pro 4.0 disc authoring software is designed to allow you to write to all DVD formats and all major-brand DVD drives. It is available for both Windows and Mac. WriteDVD!


Version 4.0, which SAI says is DVD Forum-compliant, writes to DVD+R, DVD+RW, DVD-R, DVD-RW and DVD-RAM discs. It is also projected to support name-brand drives such as Hewlett-Packard, Panasonic, Philips, Pioneer and Sony.


With the new version, which carries a $99 price tag, Pinnacle targets people who’ve yet to edit video as well as previous Studio (and its competitors) users. Pinnacle said Version 8’s ability to provide an at-once editing and authoring environment is unlike other consumer-level video products. Studio 8 editors should be able to create discs that include looping background music, as well as moving video backgrounds and menu buttons.


Studio 8, scheduled for an August release, comes in several other incarnations. Studio DV 8 ($129) includes a FireWire card, Studio AV 8 ($129) comes with an analog capture board and Studio Deluxe 8 ($299) features a FireWire card and analog breakout box.

Microsoft recently gave Neptune’s Mediashare online video sharing service a shot in the arm, announcing that it had chosen Mediashare as a component in its Windows Movie Maker. Movie Maker offers users a simple way to create and edit home movies, and Mediashare provides those users a convenient way to store and share their video albums online.


Mediashare, initially launched last October, is available for a $39 yearly service fee. Once aboard, users have 150MB of available server space, and can enjoy well-designed Flash templates, which include Java animations, as well as authoring tools for online video and still-image albums. Encoded for broadband speeds, Mediashare’s full-screen, full-frame streamed video (in QuickTime or Windows Media formats) is of very good quality. Neptune expects interest in online video sharing to greatly increase as the escalation of broadband access, DV camcorders and high-powered computers become more widespread.


The unit will record to 4.7GB single-sided or 9.4GB double-sided DVD-RAM discs and 4.7GB DVD-R discs in three quality modes: Extra, Fine and Standard. For playback, the VDR-M20-recorded video should be compatible with a variety of DVD decks and portable players. In light of today’s DVD Forum vs. DVDplusRW battle, Panasonic plainly stated that the VDR-M20’s recording technology complies with the DVD Forum’s standardized formats.


Movie navigation with the VDR-M20 will be much easier than with Mini DV tape, allowing random, instant access to particular scenes. When recording, the VDR-M20 will automatically search for a blank space on the disc, eliminating the possibility of overwriting previously recorded footage.


Panasonic also announced the DMR-E30, its newest living-room-style DVD recorder. At press time, it was slated for an August release at $800.


In addition, Panasonic’s DVDBurner II DVD Multi drive for the PC, expected in October for "less than $500," is designed to read and write in DVD-R, DVD-RAM, DVD-RW, as well as CD-R and CD-RW formats.

Avid Technology recently announced immediate availability of Xpress DV 3.5, the newest version of its prosumer-level video editor. And the big news – for the first time, it supports Macs as well as PCs.


Xpress DV 3.5 has an MSRP of $1,699, and supports Mac OS X 10.1.4 (or later) and Windows XP Professional operating systems. Along with the Avid editor, Xpress DV 3.5 includes versions of Boris Graffiti and FX, as well as Sonic’s DVDit! SE. A $2,499 PowerPack version includes a larger software bundle.

Touting its new hardware card and software as the only dual-stream editing system that seamlessly works with Adobe After Effects, Media 100 recently released i/DV (for Macintosh) and iFinish DV (for Windows).


Focusing on the content design market, i/DV and iFinish DV allow project editors to export layers of video into After Effects, utilize its animation, filters and effects tools, then export video back to their Media 100 systems with the touch of a button.


The new dual-stream system boards make use of Media 100’s proprietary DV codec. Designed to upsample in real time from 4:1:1 DV sources to 4:2:2 upon capture, the new systems should limit image degradation for compositors working with compressed video sources.