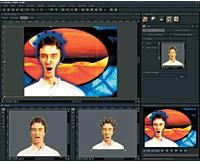 Providing users with an expanding array of video possibilities, AIST recently announced eight new plug-ins for its MovieX family of editing software (including MoviePack, MovieDV and MovieXone). MovieHighlight ($89) allows the addition of a twinkle to a subject’s eye or a glow to the top of a Christmas tree; MovieTracker ($149) can animate logos or have a still image latch onto and travel with an associated video item; MovieLightning ($49) creates transitions out of user-designed lightning-bolt displays; MovieParticles ($79) can create and animate objects like water droplets and snowflakes; MovieMorph ($149) lets users transform one object into another and MovieWarp ($129) allows for face warping.

These new plug-ins were first introduced at the beginning of the year as part of the AIST eXtreme package ($1,299). Now, editors can choose to add plug-ins, one by one if they prefer, to AIST’s entire video editing line.

Apple recently announced that it had shipped nearly 500,000 SuperDrive-equipped Macintosh computers and more than 2 million DVD-R media discs, now priced under $5 each, to date. Apple first introduced its SuperDrive, the industry’s first CD- and DVD-burning drive, and its iDVD and DVD Studio Pro software applications in January 2001.

All SuperDrive-equipped Macs now include iDVD 2 software for creating DVDs. Apple says iDVD 2 is the only consumer DVD authoring application that can create professional-looking DVDs with full-motion menu buttons and backgrounds.

In an effort to aid retail sales staffs in determining product compatibility and simplify purchasing decisions for consumers, the Consumer Electronics Association approved logos for digital video products using IEEE 1394 (FireWire, i.LINK) connectors. The ubiquitous IEEE 1394 serial interface, developed by Apple and later adopted as a standard by the Institute of Electrical and Electronics Engineers, allows quick transfers of large amounts of data, including digital video.

The baseline 1394, DTVLink, the CEA said, would apply to a product that "utilizes a 1394 serial connection; conforms to the applicable EIA/CEA technology and standards profiles based on EIA-849; and uses the Digital Transmission Content Protection (DTCP or 5C) system."

Additional monikers include DCAMLink, DVDLink and WEBLink. DCAMLink indicates that the product can process digital video content streams according to technical standards established by EIA and CEA. DVDLink and WEBLink have been adopted as descriptors, but remain to be further clarified as the standards are developed, the CEA said.

Video editors can now get even fancier with their audio tracks, thanks to Magix Entertainment’s just-released Music Maker 7. Available in standard ($50) and deLuxe ($75) versions, Music Maker 7 professes to equip editors at all levels with tools for producing a wide range of self-authored music.