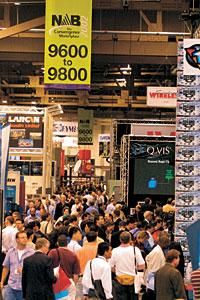 2002 Videomaker editors were on-hand at NAB 2002 in Las Vegas, tracking down industry innovations as they met with company VIPs, attended conferences and scoured acres of exhibit halls. Presented by the National Association of Broadcasters, the show offered plenty of camcorder, computer editing and other consumer and prosumer videography news.

Panasonic showed off its new AG-MX70 digital A/V mixer at NAB. Designed for live events, it combines a two-bus, eight-input switcher, a digital video effects unit and audio mixer. It features 4:2:2 digital component picture quality in both 16:9 and 4:3 formats. The AG-MX70 has a large LCD control panel and inputs include composite, S-video, component and Serial Digital (SDI). It will be available in July for $6,000. Panasonic will also offer two optional effects boards for $2,500 each.

Sony announced two new Mini DV Handycam camcorders at NAB. The DCR-TRV950 (pictured) will be the long-awaited follow-up to the classic DCR-TRV900. Along with numerous feature upgrades, the 3-CCD 1-megapixel TRV950 will have USB streaming for broadcasting live video, Bluetooth network connectivity, a pop-up flash for stills and Memory Stick removable media. It is expected in June with an MSRP of approximately $2,500.

Sony’s new DCR-PC101 will be the company’s smallest-ever Mini DV camcorder. The unit, which promises to record video at 520 lines of horizontal resolution, measures 2 1/4 inches by 4 1/4 inches by 4 inches, and weighs just 17 ounces, without battery. The PC101 should be available in June for about $1,300.

Hitachi showed a dockable DVD-RAM recorder at NAB, which should ship this fall. In addition, the company will offer a self-contained DVD-RAM camcorder, the Z-D1X. Not expected until next spring, the Z-D1X (estimated MSRP $8,900), will sport three 1/2-inch CCDs, 800 lines of resolution, interchangeable lenses and the ability to capture up to 60 minutes of video on an 8cm DVD-RAM disc.

Panasonic unveiled its AG-DVX100, which it claims will be the first Mini DV camcorder to capture video at film-style progressive 24fps (24P). Apple has committed to support the 3-CCD cam in a future version of Final Cut Pro, allowing users to capture and edit content in the AG-DVX100’s native 24P. At press time, the cam had not yet been priced.

MacroSystem US and Applied Magic both doubled the capacities of their video editing systems. MacroSystem’s Casablanca Avio DV (pictured) now comes with a 40GB hard drive without an increase to its $1,795 price, while Applied Magic announced ScreenPlay Plus (MSRP $4,595), which offers a 120GB hard drive.